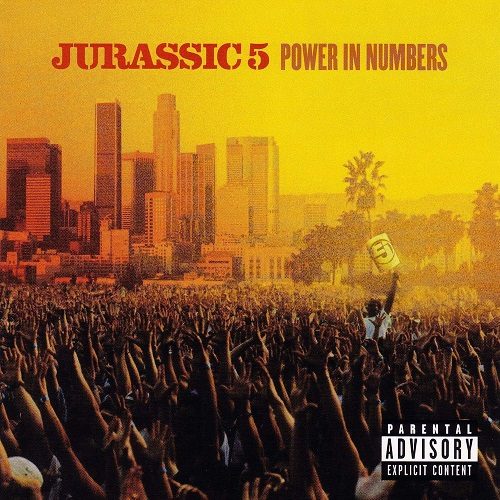 From their humble beginnings in the Los Angeles cafe Good Life to the worldwide recognition of the rap life, Jurassic 5 went from the 90’s to the 21st century with a style many said was vintage 1980’s. If that description indicates their desire to craft great rhymes, deliver true showmanship in concert, and achieve more together than seperately, then by all means lump them in with Run-D.M.C. and Funky Four + 1 More. Ever since their self-titled EP heralded their national debut in 1997, the buzz around J5 has been spearheaded by hip-hop heads who felt there was “something missing” in today’s rap. 2000’s superior “Quality Control” album answered their call, but also pigeonholed the group as being too old school and esoteric for those weaned on a diet of thuggish jiggyness.

“Power in Numbers” is both a call to arms for their loyal fans and a challenge to those who have not given Jurassic 5 their chance to shine. The production throughout by DJ’s Cut Chemist and Nu-Mark provides the solid foundation for Chali 2na, Zaakir, Marc 7 and Akil to build upon. The house they raise does not have a rarefied air – in fact it’s very clear and refreshing. The doors welcome everyone from legends like Big Daddy Kane and Percy P on “A Day at the Races” to the new jack vocals of Nelly Furtado on “Thin Line”; from the insanity of Kool Keith on “DDT” to the hardcore beats and rhymes of The Beatnuts own JuJu on “One of Them.” The words of Akil on the lead single “What’s Golden” say it all:

“We still the same with a little fame
A little change in the household name but ain’t too much changed
We in the game yo, but not to be vain
I refrain from salt grains to season up my name
We entertain for a mutual gain from close range
Steady aim, my drum at your head to hit the brain
I’m labor ready, Rhodes scholar for the dollar
Work for mines, pay me by the hour”

If you’re not already familiar with this crew, the balance they achieve with so many different voices on the mic is second to none. Zaakir is a smooth mid-range vocalist with a laid back personality, Chali 2na is the deep-throated voice that resonates, Marc 7 brings a comedic flair and Akil is musical jack of all trades. Cut Chemist and Nu-Mark provide the glue that bind them together; not just with beats but with turntablism tricks, scratched hooks, and instrumental introductions and interludes like “React” that create a blanket of surreal dopeness you can wrap yourself in. Topically they’re not afraid to cover all the bases either; they’re as willing to rap about “Freedom” as get old school and raise self-esteem on “I Am Somebody,” as Chali 2na ably proves:

“Who’s to say if I choose to make moves today?
Whether I win or lose or end up on the news today
Amused but never confused, still got dues to pay
You abuse elegant rules when you use cliches
[…]
We individually driven in the beginnin we winnin
Six men in the venomous, indepedent decision and clear vision
Pretendin was never a possibility, got to kill it be-
-cause I want to be it, a poet to win the Pulitzer Prize”

Lofty goals perhaps, but not out of reach for a group of musicians who came together with the goal to be different. The fortunate who have seen them in concert know this is not a product synthesized in a studio that doesn’t hold water. Their harmonized lines, simultaneously timed verbal hooks, and incredible DJ performances (including doing tricks on a Fisher Price turntable) are the fodder for their music. What albums like “Power in Numbers” achieve is encapsulating that sound on wax and preserving it for your enjoyment and that of future generations. Both skeptics and critics alike will be tempted to try and find a weakness somewhere – a whack beat, a poorly conceived rhyme, a missed cue. J5 is not that group, so you’re best to look elsewhere. If an album like this has any flaw, it’s that it’s sheer musical consistancy is so on point it’s hard for listeners to cite individually great songs. Let’s try anyway. The jazzy flutes and pianoes of “If You Only Knew,” the harrowing tale of Death (literally) on “Remember His Name” and the boom bap of “High Fidelity” are just a few of the many numerous dope cuts. Jurassic 5’s true “Power in Numbers” though will come in two forms: sales of their records, and conversions of non-believers to those who eagerly await the NEXT album.