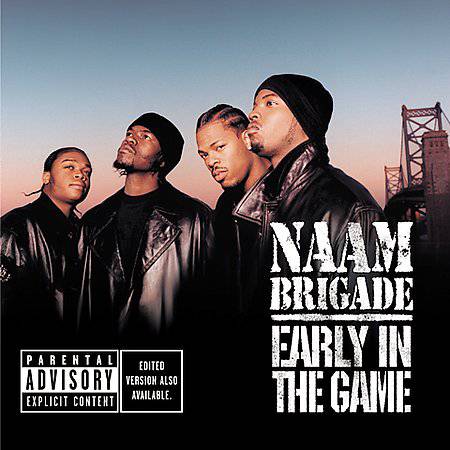 NAAM Brigade :: Early in the Game

NAAM Brigade comes highly recommended. They’ve been lauded by industry heavyweights like Funkmaster Flex and DJ Kay Slay, praised by fellow Philly artists like Eve and Freeway, and even endorsed by Ahmir ‘?uestlove’ Thompson of The Roots. Quote: “NAAM Brigade will carry the torch of our lyrical future. I’ve watched these brothers grow for the past 10 years. They’ve paid their dues and now it’s their turn to shine.”

Those are shockingly big shoes for a previously unknown group to fill when suddenly stepping in the national spotlight. The names in NAAM won’t ring bells unless you’re a consistant buyer of East coast mixtapes – otherwise Rambo, Meel Millz, Sonni Blak and Eyse Da Supastar won’t ring any bells. Fortunately, the production by Bernard “Big Demi” Parker and Edward “Eddie Kane” Pack hold them down. “Gangsta” is a nice re-interpretation of P. Diddy’s “Bad Boy For Life,” the ballad style “Can’t Let it Go” will win fans, and the urban contemporary swing of “All Night” has radio crossover written all over it. The first single though is the title track “Early in the Game” featuring Freeway, but it’s Meek who steals the show:

“Sixteen bars, the minimum; niggaz see me start tremblin
Head shots, I’m sendin ’em; serve niggaz like Wimbeldon
I’m thugged out, you feminine, I talk more shit than Eminem
Blaze baretta bullets, I like beats from Timbaland
Niggaz see me say thats him again, he all about them benjamins
Tried to change my ways, but God know I’m gon’ sin again
Smokin drinkin gin again; bad bitches, got ten of them
Cop two trucks got ten in them; cop coke off Dominicans”

Ahh, this is where the album breaks down. Even though the rappers of the NAAM Brigade could be said to be relatively clever, comparable to and even perhaps slightly better than their contemporaries, their topic matter is the same ol’, same ol’. Even though I respect ?uestlove’s opinion, I’m strongly inclined to disagree. Hell, Black Thought and Malik B, the rappers in his OWN group, have shown more potential to advance the future of lyricism than these thug rappers do. In fact, any member of the Okayplayer collective has more in the tank: pick Evidence, Gift of Gab, or Common Sense – ANY of them will drive the future of rap further than NAAM Brigade. In fact, Brigade is not trying to fool anybody when the closing three songs of their album are “Lights Out,” “We Got it Locked” and “THUGS”.

Time to trot out a familiar RapReviews.com trademark: what’s the bottom line on NAAM Brigade? Well, they’re certainly not the next coming they’re being hailed as, nor are they going to blaze up the streets of Philadelphia in a way their predecessors did. That said, the beats are okay, Brigade’s rappers do flow well enough to carry the album, and the topic matter is okay even if not groundbreaking. Don’t buy this album to find out where the future of rap is going; NAAM Brigade isn’t it. Instead, if you liked the “Early in the Game” single (available as a free MP3 through Artist Direct) and want to hear more, cop their album for a solid rap debut that’s at least good enough to keep them from LEAVING the game early.