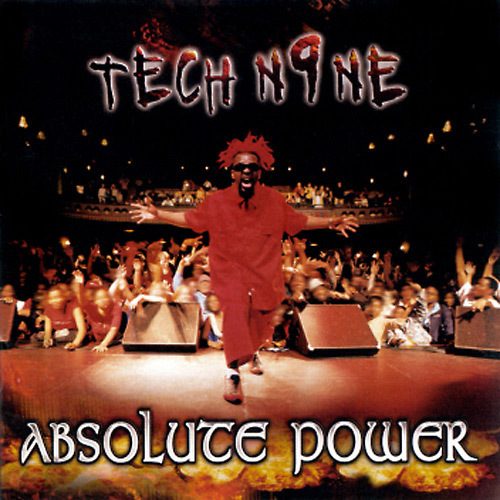 With so many regional artists in the hip-hop nation who’ve blown up their metro or home state, how do you pick the one to invest $12-$15 on when presented with all their albums at Wherehouse, Tower and Sam Goody? Some would say it’s the music videos on BET and MTV, but Tech N9ne has been with a bunch of labels that couldn’t afford to pay their own bills let alone hire a director and pay for extras. Some would say it’s spins on the air, but as Tech himself explains in the intro to “Industry is Punks” he’s not getting airplay as an unconventional slowAND fast flowing Kansas City rapper with bright red-orange hair. Maybe you’d even be enticed by the bonus DVD that many rappers, including Tech, are giving away with their LP’s now.

Fuck all that. If you need a reason to listen to Tech N9ne, this writer can go past one and give you TWO: he’s DIFFERENT, and he’s GOOD. If you were lucky, maybe you heard him doing cameos on a variety of Southern and West coast rap albums, or caught his song “Questions” on the Gang Related soundtrack. Maybe you even were enticed into “Anghellic” by the bizarre artwork and his cover of “Planet Rock.” Consider yourself ahead of the game then, because a majority of the country outside of Kansas City, MO is still playing catch up right now.

If you’ve never heard of producers like Rubonyx, Sean Raspberry, RonnZFromBerlin or Robert Rebeck, forget about all that. Big name producers are not what Tech’s about – in fact on “Yada, Yada, Yada” he talks very dismissively about one who nearly sabotaged his career. For a man who’s all about “Absolute Power” this is the smart move – link up with unknowns who can still drop fat beats, produce an album below the cost of the average big budget CD, and rely on the strength of your personality, flow and lyricism to push units. There’s no question that Nina (his other pseudonym) is just that kind of rapper, as his comical song “Slacker” proves:

“Enter the party and my homies got to pay for me
I look dazed, it just be another day for me
Gettin drunk, hopin I get to the crib safely
Pray for me, cause I’m needin money majorly
Sit at home watchin MTV with a empty P, O-C-K-E-T
I MP3, everything that I hear on the street
Never buy it, don’t deny it, I’m the fear I’ma be
You say get a job? I say hit a knob
Cause the way you run the world is every bit a fraud
So what you askin me? You get no tax from me
I got whites, natives, and mexicans, and blacks with me
Huh! I’m tryna get up there with Master P
Pass the D, cause that’s the way it has to be
We bust to be free, we trust to be G
So FUCK who be glee, it sucks to be me!”

Early in his career Tech got a reputation as a rapper who could spit very quickly to a beat (rivaling even Twista) and with songs like “Imma Tell” and “Worst Enemy” he hasn’t forgotten to show off these skills. Tech has never been a one trick pony though, so most of the album doesn’t rely on Bone-Thuggery. In fact, on songs like “T9X” Tech goes out of his way to slow things dowwwwwwwwn to a DJ Screw-like extreme. Tech also gives up his props to another pop song from the 80’s on the infectious “I’m a Playa,” set to the beat and melody of “Amadeus.” Guest appearances? They are mostly limited to homies and partners on his new label, but D-12 (sans Eminem) does show up on the smooth flowing “She Devil.”

For the most part though, Tech is on his own – and as you might suspect this is the album’s strength and weakness. N9ne has long been overdue for national recognition on his skills, but even rappers as good as Tech can fall off when spread out over a monstrously long 78 minutes. Even subtracting out skits, that’s over an hour of music. “Guns Will Bust,” “Slither” and “Here Comes Tecca Nina” work as raps for the most part but each feature repetitive beats that may cause you to lose interest or skip forward. On the other hand, creepy songs like Tech’s “Trapped in a Psycho’s Body” show off a level of horrorshow ultraviolence that even Alex DeLarge and DMX would have to be impressed by. In the song, Tech’s inner voice speaks to him from his subconscious – or is it the other way around?

[Tech N9ne’s inner voices]
I got children, and a wife
He’s thinkin of leapin off a buildin, takin flight
By now somebody shoulda killed him, end his life
Too many motherfuckers feel him, and his mic
Somebody stop him cuz he’s fuckin up my livelihood
With me trapped inside this psycho, how can I be good?”

Occasional references to the lyrics of other hip-hop artists throughout will have you geeked, but more than anything they reveal Nina as a student of the hip-hop arts who studies his peers and predecessors and builds on their techniques to create his own TECH-nique. With an album no one predicted he would survive to make after his last label folded, and the chance to do it right this time with national promotion, a music video, AND spins on the radio, N9ne may at last get that recognition he deserves. Even if he doesn’t, don’t be afraid to take a chance on “Absolute Power,” because on the title track he even describes it like “havin Halle Berry and Julia Lewis at the same time.” He’s right – the sheer bravado of his album will pump you up, the flows will keep you up, and the beats on the best tracks will make you THROW BOWS like nobody’s business. 2002 is the year of the N9ne.