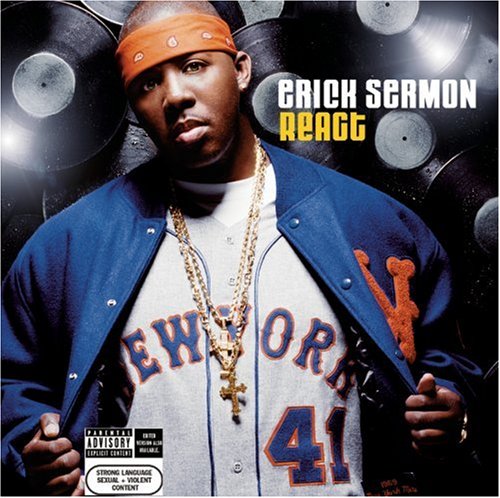 If we took the time and effort it would required to enumerate the exhaustive list of Erick Sermon’s superb contributions to hip-hop, there would be no space left for this review. So, before we go any further, here’s a little message to the know-nots: Sermon was paying dues while y’all were still in baby blues.

That said, there’s no quit in E-Dub. After being a star on over 10+ rap albums, he’s still recording new material every year. And to any who know about his production skills, Erick gets just as busy making hits for other artists as he does rocking the mic on his own songs. On the lead single off his new album though, both titled “React,” E lets well known Jay-Z collaborator Just Blaze provide the backdrop for Sermon’s homebody Redman to kick ballistics:

What’s an Erick Sermon album where he doesn’t drop a bomb on his own beats though? Fortunately we don’t have to find out, because on “Love Iz” the Green Eyed Bandit is doing his thing like always:

“(Love is..) when the planes hit
And the world got together like baseballs and mitts
New York’s Finest, so I represent my home
Hold weight on this microphone
(Love is..) when I pray for my enemies
If drama, cats get smoked by chimneys
I’m not dyin for a fake thug who need a hug
Not E-Dub – {*Jay-Z sample: “I’m focused man”*}”

You won’t be mad at the Al Green vibe built into the beginning of each Sermon stanza, especially since he pioneered this style with last year’s smash hit “Music” featuring the voice of the late Marvin Gaye. Erick also produces the anthemic “Party Right,” “Tell Me” featuring MC Lyte and Rah Digga, and the uplifting finale “Don’t Give Up” among others. It’s still somewhat surprising to see somebody other than E-Dub doing beats on one of his CD’s, but Megahertz, Just Blaze and Rick Rock aren’t hurting Erick’s traditional funked out sound at all. In fact, the later’s “Hold Up Dub” gives Sermon the Jigga bounce of “Change the Game,” which guest Keith Murray takes ample advantage of:

“Yo hold up dub, don’t even trip
This nigga constipated, so he talkin all that shit
A full clip’ll make him flip off your dick quick
Damn playboy, leave some room for the chicks!
(Muh’fucka, damn) Your ass’ll get sparked
Niggaz can’t see me like shadowboxin in the dark
Who you, blew your whack-ass crew
EQ my Squad like combustion do!”

As a music industry veteran, Sermon also isn’t afraid to criticize his own peers and the lack of variety to be found on most music venues on “Hip Hop Radio.” You can’t call it bitter, because Erick gets enough of his own songs in rotation on a regular basis, but you can call it an insightful look at how even he might be ashamed of his and other rap stars being repeatedly overplayed in a way that damages both the art and the listener:

“Yo he’s in the spotlight, that’s my jam
+Get Money!+ is all he can understand
He thinks he’s cool, and drop out of school
To become famous, forgot what his aim was
Just because he heard his favorite rapper
had fly cars, and hung around stars
But he don’t know, that most don’t have it
That’s just perception, it’s a false direction
Now he’s stuck, no school, poor fool”

To say Erick is the greatest producer in hip-hop would be false, because along with his certified hits he’s also dropped some duds over the yars. To say Sermon is the greatest rapper is also not true, but he’s aware of his own shortcomings and suprisingly humble for a man who has co-authored or authored so many of hip-hop’s all time classics. So what really makes the E-Dub so beloved by rap heads? It may be just this: Erick Sermon is the quintessential every man. He doesn’t try to be all that, but he can make you smile or chuckle now and then with his wit and he can make you move to the beat. Even when he expounds on personal or spiritual matters, it never gets too heavy to listen to. He just does what he does best after a two-decade span in rap music, and like his other contemporaries with longevity such as Too $hort and KRS-One, he’s not done yet coming back with more and more hits.