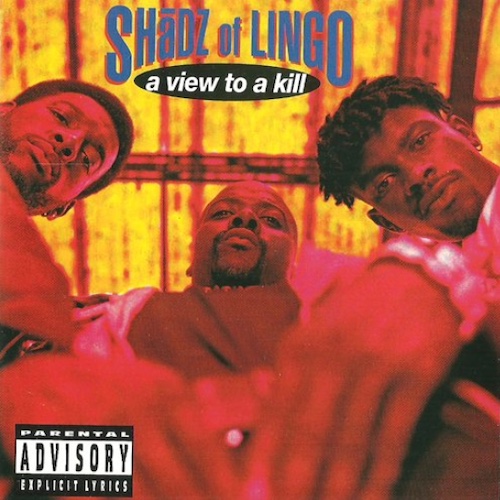 A View to a Kill

Shadz of Lingo :: A View to a Kill

The best way to get a break in the music industry has always been for someone IN the industry to hold the door open for you. Such was the case in 1993 when Erick Sermon introduced us to Atlanta rap group Shadz of Lingo on his album “No Pressure.” I knew nothing about the crew at the time, but the manic performance of the Shadz rapper who was struggling to breathe at the end of “Lil Crazy” made a big impression.

It was certainly different from anything else being done in rap at the time, and Erick Sermon’s hypnotic production gave the impression they could be “the next big thing.” Thanks to having the Green Eyed Bandit in their corner, the Shadz of Lingo scored a record deal and their debut album “A View to a Kill” followed on EMI in 1994. After one single produced by and featuring Sermon named “Mad Flavaz” dropped, the album and indeed the group seemed to vanish off the radar completely.

For me there’s a humor to hearing Erick Sermon says “ERRRIP, that’s the bassline to the Humpty skit” when my pro wrestling podcast co-host The Great Sudoku and I just discussed how many people used that exact same Parliament “Let’s Play House” sample. It was certainly ubiquitous in rap music after “The Humpty Dance,” to the point Digital Underground made fun of it via “The Humpty Dance Awards” off “The Body-Hat Syndrome.” Unfortunately Sermon’s dig at lazy copycats ends up being one of the few highlights of “A View to a Kill.” It’s not as though Shadz of Lingo lacked for quality production thanks to E Double’s influence, as the likes of Diamond D produced “Don’t Test Da Skillz” and the funky “Think I Give a Fuck.” We’ll forgive D for the fact the latter also uses a heavily sampled track — “Lovely Is Today” by Eddie Harris. My favorite jack has always been Primo’s on “2 Deep” by Gang Starr, but this one is pretty good too.

D also produced “Ill & Get Clowned,” and as much as I want to like his use of familiar bass and drum samples here, the overwhelming misogyny of the track turns me off. “If youse a lady youse a lady, if youse a bitch youse a bitch” is as NICE as the lyrics get, and then gets progressively nastier to the point even Too $hort might wince. “With that attitude, you can stick it way up where you sit!” Okay fellas, cool it. If you’re rap stars you should have no problem getting trim, so if she’s not interested, you don’t need to “clown.” I don’t think they ever became large though. There’s a “try hard” air to songs like “I Step 2 U Den” where it seems they were convinced they had to stomp as hard as possible just to hang with the success of gangster rap back then.

The personality that they showed on Erick Sermon’s “Lil Crazy” completely vanished on their own album. Despite the funky minimalistic production Dallas Austin laced on “Alwayz Stylin” and hardcore Onyx-esque stomp he added to “Wherez Da Steel,” neither he nor Diamond D could save this album. Have you noticed their need to spell everything with a “Z” yet? Sure it’s in the group’s name, they’re Shadz of Lingo, but it feels like overkill. This is like the stereotype of the “far out” and “rad” 1990’s, where marketers desperate to reach teens tried so hard to be edgy that it wound up silly. That’s the last thing a rap group who wants to be taken seriously needs.

“A View to a Kill” doesn’t have a Wikipedia entry, and barring any sudden interest from people saying “Whatever happened to Shadz of Lingo?” I don’t think it needs one — you know why? Because that’s not a question anybody ever asked other than me. I’m happy to have given them their brief moment in the sun over a quarter of a century later, but I’m also comfortable with telling you this is not an obscure album that really needed to be unearthed. It can go back to exactly where it came from.

Shadz of Lingo :: A View to a Kill
5.5Overall Score
Music7
Lyrics4