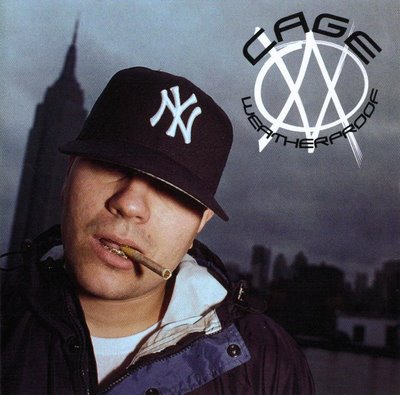 At some point as a record reviewer, internal doubts manifest themselves in listening to and critiquing an album such as “Weatherproof” by Cage. Independent underground albums like this are often only acclaimed by the independent and underground writers who review them to begin with. They receive good distribution and good press, but will never push one-tenth the units any new L.L. Cool J album will. As the writer you’re left to ask yourself these questions:

* Am I out of touch with what’s good in hip-hop music?
* If it’s as good as I think it is, why don’t more people buy it?
* Is there something wrong with me that I like it yet so many don’t?

It may actually be these self-doubts that help me relate to Cage in the first place, an artist who questions his own dopeness and who even wrote a perversely popular backpacker song called “Suicidal Failure.” Cage has no pretensions of fitting into the hip-hop mainstream populated by the likes of Dr. Dre, Jay-Z and Scarface. “Even if you don’t get the picture, the point of view’s still panoramic,” quips Cage on “Underground Rap Star.” The line defines both the song’s title and the album’s point- if you don’t get it then it wasn’t for you anyway. That’s why Cage is “Weatherproof” – he can take the rain of pop culture scorn and the critique of those who don’t appreciate it and survive the storm when “even Bobbito said FUCK IT I QUIT,” as he wrly notes on “Haterama.”

At his best, Cage is a neurotic mess who splatters his disturbed visions of the horror movies he would star in all over his records; giving listeners the impression he wishes they were more than stories. Of course it wouldn’t be musically interesting if he were an idiot babbling incoherently like a mental ward patient, nor if it was set to nothing more musical than a toddler banging on pots and pans. What makes Cage effective is a vocal tone that straddles the line between college nerd and a cell in solitary confinement, with lyrics to match and beats provided by an underground cornucopia like Mighty Mi on “Summer in Hell”, Reef on “Leak Bros.” featuring Tame One and the “Too Much (Remix)” by J-Zone. For them, madness meets musical under the needle of a stylus where insanity is clarity and convention makes a great war weapon.

This LP is more of an EP though, and those who developed a taste for Cage on “Movies for the Blind” may be frustrated by the paucity of material. This reviewer himself was frustrated by being constantly assaulted with the words “this copy is for promotional use only” uttered at points where quoting Cage might help the public better understand his morose appeal. Then again saying this CD is for promotional use only might have been his label’s idea of a joke, since no one could possibly want to buy it in stores. It’s poorly mastered and obviously only the roughest of drafts of his finished product, skips constantly, and the last two tracks only play for three seconds before any player chunks the garbled data entirely. You couldn’t do worse by taking a razor blade to any album you know and playing it; in some cases it might work better.

I suspect Cage is perverse enough to have planned it this way all along though. He made the promotional CD intentionally unlistenable just to heighten interest in actually copping the album when it drops. Either that, or as his sometimes campy horrorific tales suggest, he just enjoys fucking with people. The problem here is that I probably would have bought “Weatherproof” either way, so I can’t even give you a fair unbiased review let alone a biased one. I can say this though – Cage is not meant to appeal to everyone. Even if you’re the kind of person who watches bad zombie movies and laughs, you might not get his sickness. It’s not the retarded kind of gruesome Insane Clown Posse tries to pass off as horrorcore though, with gratuitous amounts of blood and dead bodies. Cage is more visceral, more self-deprecating, and more thought-provoking. When paired with the right beats he crafts sadistically brutal songs that make you nod and shake your head at the same time. I wish I could tell you that “Weatherproof” is another such album. I suspect it is. Then again, I wouldn’t expect you to trust my review anyway, because I don’t think 2Pac fans like this shit, even though I like this shit and I’m a fan of Shakur’s. Go figure. In the end this review is hype either way, since I can’t score what I can’t hear.