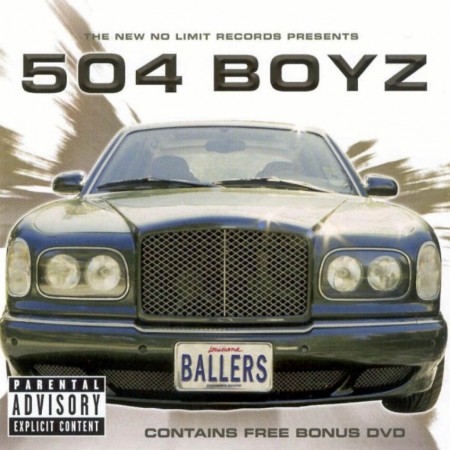 They call it the New No Limit Records. I’m not really sure why, because Master P is still in charge and is still their biggest star. Maybe they should call it the New 504 Boyz instead. The current line-up P has assembled under the name includes Magic, Silkk (the Shocker), Choppa, Krazy, Curren$y, T-Bo and himself of course. The problem is any producer in any area code could assemble a crew of rappers in the same way. I could enlist six or seven rappers from Omaha and call them the 402 Boyz and release a CD too.

So if the concept itself is rather flimsy, does any of the music itself hold weight? The answer is yes, and no. P has always had a knack for turning underground thugsters into chart-topping sensations, and the first single “Tight Whips” as produced by Full Pack Music is no exception. It’s got a fun sing-a-long chorus, a slow rolling bassline with plenty of twonk, and samples of revving engines, peeling tires, and brakes hit in a hurry. This is essentially a silly “ride out” song to vibrate the speakers in your car, especially when you hear P’s son Lil Romeo rap about a whip too. Is he even big enough to reach the accelerator yet? If any rapper in this extended posse song stands out though, it’s Magic:

“I’m doing 80 in the lightnin – deuce trays on shine
The cops try to pull me over but my rims done blinded ’em
Plus I got fo’ models in the back of my truck
18″ Bazooka bumpin my stuff, wakin the BLOCK UP!”

Magic’s raspy voice and ghettofabulous topic matter have long made him an underground star, but for some odd reason he’s never blown up. He won’t on this CD either because he’s featured only sporadically, most notably on “I Gotta Have That There” which is built on an Isley Brothers sample of “For the Love of You” – probably making it a future choice for a single. If not that one, maybe the smoothed out urban contemporary stylings of “I Got You Girl” will be on hit. “Yeah Yeah” sounds enough like a Trick Daddy/Slip-N-Slide song that it could make some mixtapes, and Krazy shows himself to be Magic’s equal on the song “Tell Me”:

“This Henessey got me gone, my eyes are blurry
Face to face with reality, my dog is gone
For them bitch niggaz that did it, I finger fuck my chrome
And my dogs in the pen, doing fifty to life
I’m a soldier ’til I die, motherfuck three strikes
I remember b-balling with my niggaz for fun
If I bust then you bust, I gave you my gun
Telly, dog you know I miss you, I still got love
Just to be the man you was, I’d probably drink your blood”

Monotonous material abounds though. “War” is your typical, “we pack steel if you fuck with us you get killed” song which gangsta MC’s from all over the U.S. have long since beaten to death (no pun intended). “Everywhere I Go” is a tight production by Da Beat Boyz, thanks in large part to a Willie Hutch sample, but Curren$y is probably the New Orleans answer to Fabolous. Even if he was spitting the legendary verbals of Rakim, his unethusiastic rap would have caused me to miss every single gem. At some point I suspect 504 ran out of inspiration for beats because the track immediately following is another obvious sample, this time from Al Green’s “Love and Happiness.” It makes “Everybody Chillin” a listenable track, but the rappers still bore. Other banal material includes “Who Run This” (a blatant rip-off of Three 6 Mafia), “Look at Me Now” (a blatant rip-off of Tupac Shakur), and “Get Back” (a blatant rip-off of Lil Jon’s club smashing style).

To P’s credit, the disc does come with a bonus DVD that showcases the video for “Tight Whips” as well as some footage of the rappers hanging out and bonus material with facts about Master P and the label’s upcoming releases. P has always been a genius at selling his product even when it’s little more than shaved soap flakes in a ziplock bag, so you certainly can’t fault his business acumen. “Ballers” is definitely a mixed bag at best. There’s some pure uncut here and there, but a lot of these Boyz are a poor substitute for former No Limit stars like Mystikal and Snoop who have already left for greener pastures. What’s new about the New No Limit is that P is trying to do more with less, and although it’s certainly an interesting CD “Ballers” is just not compelling in the long run.