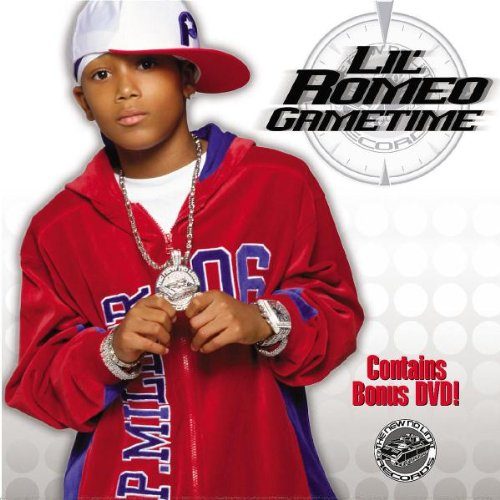 Way #1 to piss off a record reviewer – make the shrinkwrap and security tape on your new album harder to get into than Fort Knox.

Way #2 to piss off a record reviewer – package the bonus DVD in the top tray instead of underneath, wasting needless time having to swap in the right disc.

Way #3 to piss off a record reviewer – give him no better new album to review in a week than Lil’ Romeo’s “Game Time.”

Let’s all be honest here – everyone knows that there are only two reasons Lil’ Romeo is in the rap industry: the first is the success of the Jermaine Dupri produced Lil’ Bow Wow, and the second is that his father is Master P. The latter has both an upside and a downside — Lil’ Romeo is a better lyricist than his father (or at least has better ghostwriters) but lacks his father’s charismatic delivery that makes even his ignorance entertaining.

Sadly though, this album’s idea of innovation with it’s first single was to cover – or some would argue rip off – the Rob Base and DJ EZ Rock hip-hop classic “It Takes Two” under the guise of “2 Way.” If you were born after 1984 and didn’t seriously listen to hip-hop music before the age of 4, you probably need a late pass on this important fact. Trust the elders when we tell you, this version stinks. In fact, ask us for a copy of the 12″ of the original, although you might end up listening to some N.W.A and EPMD in the process when we go digging through those crates.

I’m not really sure whether to blame Rome or his producers, but it’s evident that they have no shame about ripping off classics whether they’re old or recent. Jay-Z’s “Hard Knock Life” is shamelessly remade into “We Can Make it Right.” “Girlfriend and Boyfriend” lifts it’s entire sound from another old school classic; “Friends” by Whodini – although some new jacks may actually think of it as “If I Ruled the World” by Nas (featuring Lauryn Hill). If “Wanna Grow Up” sounds like another song from “Annie” to you (or even “Hard Knock Life Part Deux”) it’s not a coincidence. “Richie Rich” doesn’t explicitly say it’s a cover of “I Got it Made” by Special Ed but the true schoolers will know.

The problem is that the original songs are so banal, they actually make the ripoffs and covers pleasant by comparison. “My Biz” features the kind of run-of-the-mill singing that would get you voted off “American Idol.” “Throw Em Up” sounds like a Master P bounce track, but an older No Limit rapper with a deeper voice belongs on something this hard. Thankfully that’s at least true of “Where They At 2” when P makes a guest appearance. Nobody could save the obnoxious “Clap Your Hands” though, a song whose video game inspired production does a disservice to Atari and Intellivision. Let’s not even go there with “Bring It,” because not only is the Myke Diesel beat pathetic but I doubt anybody Rome’s age can “bring” more than a platinum Nerf gun and a chromed out 10-speed, let alone the pythons needed to scrap in a street fight.

These days listening to No Limit’s releases seems to be an exercise in testing your patience; that is how long you can hold out before you rip it out the CD player and chuck it at the nearest brick wall. Lame copies of old classics, weak rappers who can’t even hold Silkk the Shocker’s jockstrap (and he’s no mic virtuoso to begin with), and beats that make you cry for the days when Beats By The Pound were large and in charge. It’s been a long time since anything the caliber of “Make Em Say Uhhh” or “It Ain’t My Fault” has been heard from this label, and things just aren’t getting any better. Fans of little kid rappers or the screaming teenage girls of 106th and Park might like this, but I’ll pass on it. If I want the classics I’ll hear them done by the right rappers, not Rome; if I want new No Limit shit I’ll wait until P drops a new album.