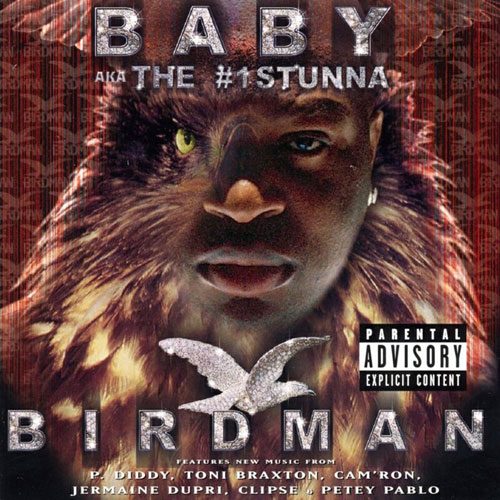 This shit is getting silly.

Over the years, the Big Tymers went from regional notoriety to national sensation due to Mannie Fresh’s self-production and the simplistic charm of his and Baby’s raps on songs like “#1 Stunna” and “Get Your Roll On.” Neither one of these erstwhile MC’s originally had the intention of being as Big Tyme as their name, they were just filling space in their label Cash Money’s roster so they could put out more product. Ever since Juvenile left for greener pastures though (he was reportedly getting ganked left and right) the Tymers have increasingly made themselves the stars of their recording empire. And even when Baby spit corny punchlines like “The Birdman daddy, I’m fly in any weather” you could forgive him because Mannie’s beats really were just too damn hot not to pump in your ride.

Somewhere along the line though, Baby’s ego went straight to his head. Perhaps he actually believes he’s a dope rapper now? Well he certainly thinks the aforementioned cornball line from “Still Fly” was hot, because now he’s based an entire solo career around that gimmick. Ladies and gentleman, Baby (aka The #1 Stunna) is now officially the “Birdman” in every song on his thusly titled debut album. And this shit isn’t about B.G. or Juvey no more – it’s about Jermaine Dupri, Petey Pablo and P. Diddy. You heard right – TWO erstwhile label owners are now rapping together on the same song and this album’s first single “Do That (Shit).” Lord have mercy on us all:

“See I walk through the club wit my Prada on
Valet to the keys cause the car so strong
Twenty four whoooo, mami know too
Ballers come through the side do’ wit they crew
I went left, and Puff went right (I’m here Baby)
Plus we had on all that ice
I had a bald chick, he had one too
I had a mink on, she had one too” – Baby

“Now shake it fast, watch yo’self
Ma show me what you workin wit – twurk dat thang
Bounce like that girl work that thang
Make a nigga wanna hurt that thang; stop frontin ma
and do that dance, make ya knees touch ya elbows
and do dat dere – what you got dere?
Bend over, show that tattoo right there
Just shake it, shake it, break it, break it” – P. Diddy

It’s obvious neither of these CEO’s know the first thing about lyricism, and Puffy even has to borrow from Mystikal in an attempt to set off some heat with his rap. For better or worse though, this Jazze Pha produced track is catchy enough that it will still be a hit on the charts. It’s hard to ignore how bizarre things are on this album though, especially when you hear “Looks Like a Job 4…” at the beginning of this CD. I may be the only one, but I don’t need a whole hip-hop song full of a grown man trying to sound like cooing pigeons and screaming “BIRD CALL MUTHAFUCKA!” And since it’s Baby rapping, don’t expect anything more sophisticated than this:

“I get what I want, what I want I can have it
Lexus, Bentley, and the Jag nuttin average
Never got married but I’m lovin Ms. Lavish
Bird lady in that brand new Caddy”

Even as one who is not the world’s biggest fan of Lil Wayne, THANK GOD for his guest appearance on “I Got To.” He’s the only one of Hot Boys to show up on this whole CD, and his rap is a tall refreshing drink of water after nearly choking on the syrupy sweetness of Baby’s flow:

“You probably see me sittin on the Range, I’m hustlin
Look up in the sky, it’s a bird of some ‘caine!
Ey, I flip it twice and I serve it a-gain
Shorty ride fly, twenty-birds on that thang
I say shorty ride hydro, burn my brain
Gotta love the boy, I be durrin my thang!”

This track is wisely produced by Mannie Fresh, but surprisingly quite a few of the songs on “Birdman” aren’t. “Baby You Can Do It” is handled by Timbaland, who gives the song a classic old school funk. “What Happened to That Boy” produced by The Neptunes and featuring Clipse is unsurprisingly one of the best songs on the CD. Jazze Pha does a lot of work throughout the album, but one of his best is the pimped out stylings of “On the Rocks.” And of course, Jermaine Dupri produced his own song “How it Be,” which also features TQ. This is not quite the union “Welcome to Atlanta” was with Ludacris though.

Overall, the music on this CD is a-ight. It’s not quite as fly as “I Got That Work” or “Hood Rich,” but then those albums had a more cohesive sound by being Mannie Fresh products from start to finish. It’s obvious that for Baby’s solo career, they attempted to branch him out by bringing other musicians in the mix, but in the process lose some of the charm that made the union of the Big Tymers so interesting. Although a Mannie Fresh solo album would really be taking this runaway train way off the tracks, let’s at least hope he does it all himself. For diehard fans of Cash Money who can overlook how preposterous the idea of a man who has minimal rap skills acting like an aviary buffoon, “Birdman” is an okay album. Nothing astonishing verbally, mostly sufficient musically, and to the rest of the music world in general it’s just plain comedy (but really not that funny).