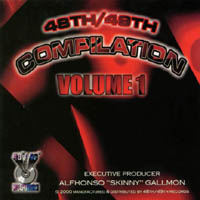 Welcome students. The topic of today’s lecture is: How to Put Yo City on the Map. It’s quite simple, really. If you’re looking for recognition beyond your city limits, you have to come with SOMETHING DIFFERENT. Why sould anyone bother to check out some local rapper 1000 miles away when hundreds of acts in his own area are doing EXACTLY THE SAME THING as the guy 1000 miles away? In the late ’90s and beyond, there were countlesss regional rap labels who put out music that became increasingly interchangeable. Unfortunately, this type of music is not music you couldn’t get enough of. It’s not like you’d say to yourself: Now that I checked out every local dealer that provides that kind of stuff, let me make this 1000 mile trip to see if I can find some more of it. In fact, most of it sounds like it’s sampled from a sound library from the do-it-yourself kit that comes along with the ‘How to Suceed in the Music Business’ book. It’s music that has never really crossed over, always remained regional, music that doesn’t seem to be influenced by anyone and doesn’t seem to influence anyone, music without a past and without a future. It’s music that doesn’t really matter that much because what matters is that the rapper is talking about your town.

That said, it’s clear that the “48th/49th Compilation Vol. 1”, a record that falls exactly into the above category, is not very likely to gain attention outside of the District of Columbia, where 48th/49th Records is based. But that’s not really label owner Alfhonso ‘Skinny’ Gallmon’s concern. The real challenge in Washington seems to be to establish a sustainable record label period. Here’s an excerpt from the fictional business meeting they held for this album: “There’s a lot of independent rap labels here in D.C. that constantly drop their releases but are unable to make a successful run because of limited funds for promotion and lack of support from these D.C. major commercial radio stations. But our strategy here is to appeal to the people in the streets first and monopolize neighborhood by neighborhood, then state to state until we conquer and destroy the supposed myth that D.C. area rap labels can’t make it.”

Often, grassroots promotion is indeed the only way to gather up local support. Call it industry rule 4081: Want spins on the radio? You got to pay me, son. Closely related to #4084: Want daytime airplay? You got to pay me more. Therefore 48th/49th Records, like so many rap labels before them, did the most obvious and took it to the streets, figuratively and literally.

Tha Royal Family sets the hustle off with “NtroducN… Tha Royal Family”, which is by no means unpleasant to the ear, featuring a strong but subtle melodic background. All the while The Royal Family let’s us know where they’re coming from and where they intend to go (“Three teenagers introducing ourselves to the rap game / before we leave it everybody gonna know our name”). Despite repeating the capitalist mantra of “it’s all about the dollar bill, cream and cash,” The Royal Family members don’t only look out for their own interest:

“People say they see my future, that’s me rottin’ in a jail
but I don’t, I see me doin’ somethin’ right
like buyin’ Benzes for the mother, buyin’ mansions for the wife
Right now I’m on a misssion
I don’t have no time to worry about haters or the competition
I’m tryin’ to make major moves like the President
lower people taxes, help the people pay the rent”

It’s always good to see a rapper displaying confidence in his own abilities and concern for the next man. Who cares if The Royal Family is about as much “a lyrical dream team” as this year’s US team that played the World Championships in Indianapolis was a basketball Dream Team. As with all music, rap goes beyond the mere technicalities of it. I should mention that this record came out in 2000, thus reflecting the apocalyptic mood that was prevalent in rap music during that time. Not that anybody was really expecting the grand finale, it was just something rappers chose to reflect upon. That’s why you got two versions of a song called “Armageddon” on this CD. That’s why God gets called upon so many times. And this ain’t even a gospel rap album.

Back in the mid-90s, the ever-struggling Tupac Shakur laid the foundation for this genre. Following his lead, what was once known as ‘gangsta rap’ became more and more spiritual. Often, with disastrous results. Sometimes there is a disarming honesty in these stereotypical remorseful thug lyrics. For instance, in the song “Valley of Decision”, one rapper goes: “Lord forgive me for my sins,” only to add, within the same breath: “…even though I’ll probably commit ’em again.” It’s the perfect marriage of hipocrisy and honesty. I tell you, the Catholic church could learn something from these rappers. All these rappers need is someone to tell them that their Lord probably won’t forgive them ALL of their sins, especially if they already admit they’ll commit them AGAIN. This goes especially for this guy: “Lord forgive me for my sin / cause I murdered again.” That’s how rappers, who are ULTIMATELY ON THE RIGHT TRACK, stray from their course and come up with completely absurd conclusions. Then again, this reviewer has never had to “dodge these white man prisons walkin’ through valleys of decisions,” so…

In the end, if it makes people think, if it gets a positive message out in some shape or form, a rap album like this is actually beneficial to society. But since it came out two years ago and you haven’t heard of it ever since, you can bet it remained local. I hope at least some people in D.C. heard it, because that’s who it was talking to.