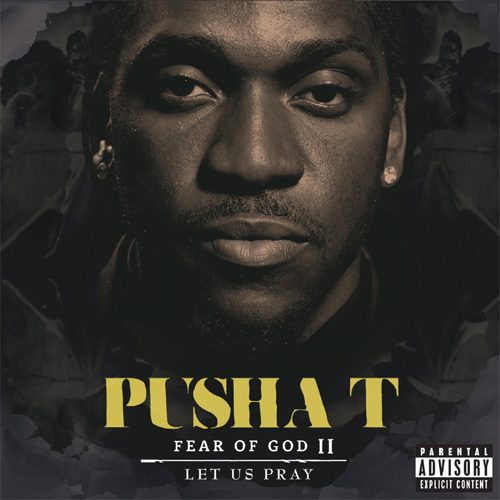 As one half of rap duo the Clipse, Pusha T is responsible for one of my favorite albums of all time, 2006’s “Hell Hath No Fury.” On that album, he and his brother Malice perfected the art of coke rap over ice cold Neptunes beats. It was an album that critics and hipsters loved, but that the general public stayed away from. It sold 78,000 in its first week, an unimpressive number back in the halcyon days of 2006, and as far as I can tell it didn’t even go gold.

They followed that album up with 2009’s “When the Casket Drops,” which sported a new sound, and production by people other than the Neptunes. The critics were unimpressed, and it sold less than HHNF. In March, Pusha T released a solo mixtape via Kanye West’s G.O.O.D. Music imprint, and this sequel contains songs from that mixtape as well as new material.

Those of you who are expecting the sparseness and cold-blooded coke rhymes of HHFN are in for a shock. If there is a signature sound, it is Lex Luger’s melodramatic trap rap, not the Neptunes minimalism. Not that Luger handles any production, but Rico Beats, the VIPs, Tha Bizness and Hit Boy have all clearly learned from Luger how to make Fruity Loops rattle trunks. The result is an album that is part trap rap, part New York champagne rap, and much less weird than the beats on the first two Clipse albums.

Pusha’s brother Malice is M.I.A., but a slew of other rappers are on deck to take his place. Rick Ross, the rapper Pusha most resembles, shares verses on “I Still Wanna.” Kanye and Young Jeezy make an appearance on “Amen.” 50 Cent gets off some tight bars on the sinister “Raid.” Juicy Ja, Meek Mill, and French Montana bring Pusha back to the trap on “Body Work.” Tyler the Creator shows up on “Trouble On My Mind,” where the two rappers go hard over a stripped-down Neptunes beat, the only one on the album. Both rappers have made careers out of being apologetically wicked. In Pusha’s case, it’s being the unrepentant drug dealer who knows his product has ruined lives but doesn’t feel bad about. Tyler excels at being a juvenile asshole with a gift for delivering diatribes in rap form. I’m not a Tyler fan, but I have to admit that his surreal curse-filled rants sound fresher than Pusha’s aging coke rap. Pusha does manage to nail the split worlds he inhabits, rapping:

Pusha seems to be rapping both about cocaine and the Clipse, and the way that both the drug and the rap group make unlikely bedfellows of African-American street criminals and white hipsters. There are also some signs that the whole coke dealer persona is a put-on, at least to some extent. “What Dreams Are Made Of” starts off with a quote from wrestler Ric Flair, telling an opponent “last year I spent more money on spilled liquor, in bars from one side of this world to the other, than you made!” It’s almost as if Pusha T were admitting that his persona is as staged and exaggerated as the flamboyant Ric Flair’s wrestling personality.

One of my favorite songs on the albums is also one of the most ridiculous. “Feeling Myself” has a hook sung by Kevin Cossum that is so silly it could almost be a Lonely Island parody (I’m feeling myself/It’s my world/Spending money like a rich white girl/I’m gon’ ball like I’m 7 feet tall”). The song is a celebration of the good bad life, and both Cossum and Pusha make it work despite the goofy lyrics.

Pusha’s drug pushing bona fides have never been questioned. He’s been rapping about it for nine years now, and it is getting tired. There are points on this album when Pusha reminds me of my Dad: telling the same old stories about the same old period of his life. Of course, my dad’s stories are about being a surfer in Santa Cruz in the 70s, and his tour of duty in Vietnam where the only casualties he suffered were hangovers from shitty beer. But listening to Pusha’s billionth reference to selling coke was in many ways like listening to my dad’s billionth story about stumbling on the local gangster’s marijuana fields while trying to find a surf spot on Kauai (he was politely asked to leave by several heavily armed Hawaiians). It’s all bragging about stuff they really shouldn’t be proud of that they did a long, long time ago when they were more interesting.

The saving grace for both Pusha T and my dad is that they’ve grown older and wiser since their wild days, and that perspective makes their nostalgic ramblings worth listening to. In my dad’s case, it’s his first-hand understanding of how horrible war is, and the idiotic things young men do sometimes. For Pusha T, there is an undercurrent in many of his rhymes that the life he is bragging about is nothing to be proud of, that lives were ruined to get him his money, and that the cars, planes, and expensive baubles he has weren’t really worth it. This is best captured on the last track of the album, “Alone in Vegas.” Nottz provides a melancholy beat, and Pusha raps about being the last one left in his suite in Las Vegas.

It is that sense of isolation and moral reckoning that made “Hell Hath No Fury” so good, and that has kept “Fear of God” in my stereo since it came out. I don’t care how much money Pusha has, I’m not that interested in the mechanics of coke dealing, but Pusha’s anti-hero persona keeps me coming back. He’s never too sappy, too apologetic, or too mean-spirited. He’s blunt about the terrible things he’s done, and he’s blunt about how much he enjoys the fruits of his labor. Still, underneath it all you get a sense that he knows that the day is coming when he will have to atone for his sins. His album titles are loaded with biblical sentiments, and you get the sense that Pusha T is alone in his mansion waiting for the Old Testament God to punish him for his wickedness. The fact that this drama is set to banging beats is icing on the cake.