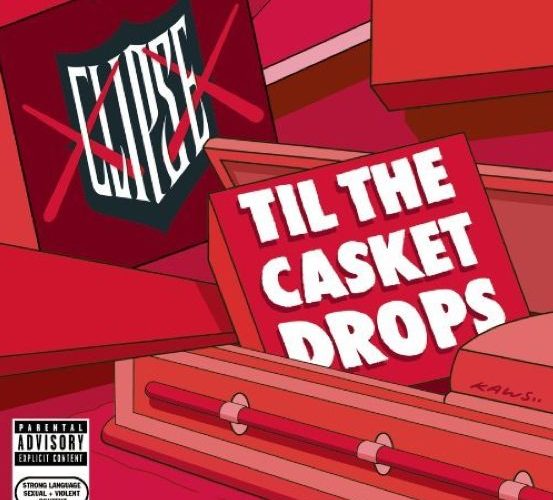 Clipse :: Til the Casket Drops

“Be careful what you wish for…”

Ne’er a truer word spoke. After spending much of this decade in label limbo, the Clipse have finally jumped ship to Columbia Records â€“ an aptly named major for the Virginia-born duo, cooking up coke rhymes for most of the Noughties. In production terms, it means a break from those Neptunes-only beats, opening up an untold world of, erm, DJ Khalil’s, not to mention Sean C & LV’s … And that’s about it. So “Til the Casket Drops” comes a full three years after what was a critically-acclaimed classic (“Hell Hath No Fury” â€“ one of the few albums this decade that genuinely deserves that accolade), and anticipation levels are fever-pitch amongst hardened hip hop heads, hoping that another HHNF would somehow rescue an entire decade mired in mediocrity. This represents a different kind of pressure for the Clipse, and they finally got what they wished for: a great major label behind them, somewhat more varied production and a fervent fanbase that passionately wants them to succeed.

The question that arises from getting what you wish for is whether it becomes a help or a hindrance. For example, opening up production duties to non-Neptunians results in the stunning album opener “Freedom,” involving a glorious instrumental from Sean C & LV, passionate lyrics and an insane outro. Being on a major label, however, brings commercial pressure to at least try and break even, hence the somewhat clunky and out-of-place “All Eyes On Me” featuring Keri “The Kiss of Death” Hilson (everything she guests on seems inexplicably destined to turn to dust). As for their loyal customers, they have received two noticeable differences on TTCD: the first, a roster of guest MC’s and singers, and the second, a change in lyrical subject matter.

After the first couple of spins, it is clear that this is no “Hell Hath No Fury” â€“ in that 2006 epic, a singular cause was underpinned by unilaterally superb Neptunes production, and the Clipse breathed new life into a fast-forgotten sub-genre of hip hop. They were focussed with a crystal clear vision of what they wanted to achieve, and fuelled by a sense of perpetration and injustice at the hands of a big, bad record label. Everything worked exactly as it should have, but now the element of surprise has been removed, so the formula could never be lazily duplicated. One of the best lines from their last album was on “Hello New World” when Malice spits “But this information I must pass to the homies/If hustling a must, be Sosa, not Tony…” That is somewhat their viewpoint on TTCD, where they rap about love, loss and happiness being able to watch “Madagascar” with the kids. They are past having to live the life of a street hustler, and want to enjoy more simple and, dare we say it, honest pleasures, enjoying life sitting above the game on songs like the exquisite “I’m Good” rather than immersed in the harsh “Grindin'” they used to face.

Of course the various caveats of coke, money and bitches are forced to provide the backbone that fans have come to expect, but the Clipse almost undermine it all â€“ at this stage in their careers, having enjoyed success through albums, mixtapes, guest appearances and live shows, would anyone even slightly believe them if they just rapped about being cocaine kingpins? It’s almost all delivered with a knowing wink, being victims of their own success, whilst not having a comparable output to Jay-Z or Kanye West. After all, those two have evolved hugely since 2002, but have managed to specifically detail how over five and four albums respectively (plus countless guest appearances). This is only the third Clipse album in seven years, so whilst they have clearly matured, they have had to balance their albums with music that may not have fully represented their actual personalities. They go some way to changing that, with impassioned and deeply personal lyrics on certain songs, though there is always a “but” attached to everything. This doesn’t help the first few listens, as, quite frankly, it doesn’t make too much sense, either sequentially or in pure and simple terms, believability.

One of the problems with TTCD is that, whilst it succeeds as a long play, it doesn’t withstand dissection particularly well. The first half of the album is practically flawless, with superb music, diverse (if not technically up to their usual standard) lyrics and some notable guest appearances (with Kanye and Cam’ron doing particularly well). Up to (and including) “Doorman” it is pretty much on par with HHNF, at least on a superficial level â€“ for sure, “Popular Demand” and “There Was a Murder” are numbers that soon grow into bangers. The second half, however, is more variable â€“ none of the songs are straight up trash (hence why it all works well as an album) but some feel either substandard or slightly out of place. “Counselling” isn’t a bad song, but combined with the musically decent but chorus-less “All Eyes On Me,” it smacks of commercial desperation gone wrong. Whilst in the past they have always included a female-centric song (like “Ma, I Don’t Love Her” or “Dirty Money”), those have always been interesting due to the slightly subversive viewpoints taken on such tracks. Here, it is simply corny mama-got-a-fat-ass or TGIF Club 101 nonsense that has no place on a great Clipse record. (They may as well have replaced them with the more fitting Scott Storch number “Fast Life” which was released on their Re-Up Gang album last year).

Then you have the other sub-contracted ones, like the Sean C & LV-helmed “Never Will It Stop” and DJ Khalil’s “Footsteps.” The former sounds like a Neptunes joint on HHNF, except not quite as authentic â€“ in other words, what’s the point? As for the latter, it is a perfectly decent album track but doesn’t quite match either of Khalil’s other excellent contributions. The other two Neptunes efforts, “Champion” and the military verve of “Life Change,” are much better suited, helping to ensure the album signs off in style. If last time out, they were having “Nightmares,” at least now they are able to sleep with both eyes firmly closed.

In the end, isn’t that really what life is about? Whilst we can bicker over the relative merits of “Til the Casket Drops” or whether “Hell Hath No Fury” was better, none of it truly matters that much to the Brothers Thornton. The Clipse are now in control of their own destiny, in a way that they have never truly been over the last decade. They have moved on from their former life, both in reality and in terms of what they rap about. And yes, they probably do sleep just that bit better at night. This, of course, has little to do with how well that translates into an album â€“ one that ultimately you or I would brave the cold to purchase. There are misgivings, mostly to do with the unfocussed second half of the album and, if we are being harsh, some of the flows and subject matter (it does seem randomly assembled and somewhat confused, certainly lacking the focus of their previous effort). “Hell Hath No Fury” was one of those rare albums where the music and lyrics meshed perfectly, until they were barely distinguishable â€“ the result was a product that you could happily play in any situation. That is what separates it from “Til the Casket Drops” â€“ I just can’t say the same. But over the course of just under an hour, the Clipse still do a good enough job of selling us their particular brand of music, and whilst this may not be a sure-fire classic, it is still an interesting enough listen to make it one of the more worthwhile purchases of the year. After all, in this 2009 hip hop landscape, any album with 8 or 9 truly strong tracks is, let’s face it, as good as it gets now.