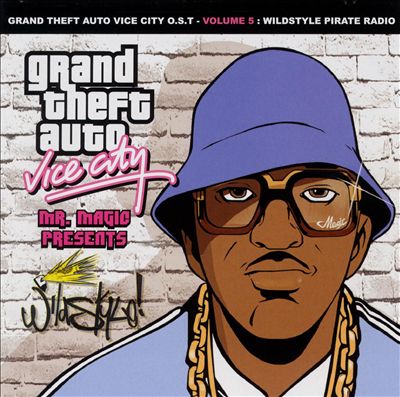 Big gold chains. Shell-toe Adidas with the fat laces. Kangol hats, Dapper Dan leather jackets, and five-finger rings. If you recognize this period of hip-hop, then you grew up in or lived through the 1980’s. “Grand Theft Auto: Vice City” is a game which embraces the look, style and fashion of that excessive era; one that even includes a “Wildstyle Pirate Radio” channel you can tune in while cruising in the jacked whip or ride of your choice.

In the game and on this soundtrack, these retro-hip sounds are brought to you courtesy of hip-hop legend Mr. Magic. It’s refreshing to see the thought put into presenting these vintage tunes the right way, with a DJ from the times who certainly understands how pioneering these songs were. You may remember pop-locking and headspinning to some of these classics: “Rockit” by Herbie Hancock (featuring an uncredited Grandmixer DST), “The Message” by Grandmaster Flash & the Furious Five, and “More Bounce to the Ounce” by Zapp & Roger — and that’s just the first three songs!

Admittedly, this is a compilation for the nostalgic and for afficianadoes of the old school. That’s TRUE OLD SCHOOL y’all, not what most kids today mean when they say “old school” referring to songs by Public Enemy and N.W.A. We’re talking “old school” like “One for the Treble” by Davy DMX and “Looking For the Perfect Beat” by Afrika Bambaataa & the Soulsonic Force. For those same kids though, there’s a lot to learn about how hip-hop grew up in it’s nascent days to be the powerhouse of music and the recording industry today. Kurtis Blow may not be mentioned today except by those watching “Krush Groove” on VH-1, but back when he recorded “The Breaks” he was the undisputed king of rap. Peep the stylistics:

Kurtis had all the tools – a golden voice, a gift for the flow, and a witty and humerous lyrics with a sob story that everybody of all colors could relate to. The great part about these “Breaks” was their ability to make you forget your troubles on the dancefloor, thanks to a funky groove and smooth rap to make you stomp your feet and finger-snap. It’s no wonder that even 20 years later, up and coming rappers like Lil’ Bow Wow still cover his classic “Basketball.”

There’s no shortage of gems on this CD. From better known songs like Run-D.M.C.’s “Rock Box” and the tribute to Magic’s Rap Attack radio show by Whodini called “Magic’s Wand” to somewhat more obscure songs like Man Parrish’s “Hip Hop Be Bop (Don’t Stop)” and Hashim’s “Al-Naafiysh (The Soul)” it’s all guaranteed to make you want to rock a pair of Pumas and a fresh Fila jacket. Even if you’re not a fan of the line of hyperactive and somewhat ultraviolent Grand Theft Auto video games, fans of new school and old school hip-hop alike should look for “Volume 5” of the Vice City O.S.T. This one actually succeeds where a lot of retro compilations fail by not only capturing the sound but the FEEL of that pioneering era, and with this album you’ll be practicing spins and windmills to the break’a’dawn.