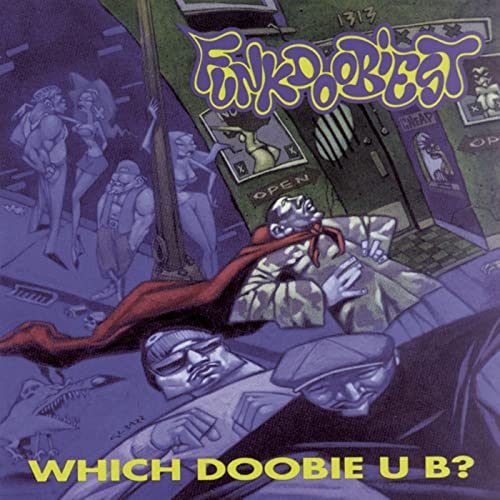 Which Doobie U B?

Funkdoobiest :: Which Doobie U B?

My oldest memory of “Which Doobie U B?” dates back to its release in 1993 when I was still a pimply teenager. There was no WhoSampled.com at the time, and hell to be honest there was barely even a world wide web. As an observant listener though I didn’t need either of those things to recognize a sample from the Funkdoobiest track “I’m Shittin’ On ‘Em” immediately.

For the unfamiliar the track in question is Joe Williams and The Jazz Orchestra’s “Get Out of My Life.” For a short period of the early 1990’s this was one of the MOST sampled tracks in all of hip-hop. Several songs had already made this beat jack legendary in my view. Kool G. Rap & DJ Polo’s “Ill Street Blues,” Double XX Posse’s “Ruffneck,” Pete Nice’s “Outta My Way Baby”, a “Latifah’s Had It Up 2 Here” Remix, and hell even an interlude on House of Pain’s sophomore album all flipped the track. To be honest when I heard it on “Which Doobie U B?” I was the one who “had it up to here.” I was just ready for hip-hop to move on but producer T-Ray was clearly not.

That’s the thing about Funkdoobiest in general — it felt unnecessary. I get that everybody in the group was Soul Assassins family, something that the single “Wopbabalubop” played up big time thanks to T-Ray giving it a slinky DJ Muggs flavor and B-Real vowing to “Play your punk ass like a hannnnnd of poker” in the opening verse. I don’t think it’s a coincidence that it’s still my favorite song from the album over a quarter of a century later.

Just being friends with B-Real, DJ Muggs, T-Ray and the like shouldn’t be reason enough for an album. Of course that statement holds true for every clan, posse, crew and clique in hip-hop — it feels like everybody gets put on because of their family or friends. That’s not strictly true 100% of the time, but if you want to rise to the top it doesn’t hurt to know somebody that already has the access code for the elevator. The group also has a personality problem similar to the one that plagued Cypress Hill, where B-Real’s nasal delivery and charismatic flow often overshadowed his partner Sen Dog. Even though Funkdoobiest was ostensibly a group featuring Son Doobie, DJ Ralph and Tomahawk Funk, you couldn’t be blamed after hearing “Bow Wow Wow” if you only remembered Son.

“I bow wow wow yippie yo yippie yay to the funk, punk/I put you in my trunk.” His partner in rhyme was sunk from this single on. Tomahawk isn’t even on the lead single. Yeah he’s visible in the video but he’s not heard for even one iota of a second anywhere on it. Hey Tomahawk brother, “Which Doobie U B?” Oh right. You’re the one who left the group in ’98 after being forgotten and going uncrecognized for five years. Can’t say I blame you.

This was a problem with all of the singles off their debut album. Once again on “The Funkiest” it was Son Doobie front and center on the song and in the music video, with Tomahawk Funk playing an unspoken role. You have to dig deep into the 40 minutes of “Which Doobie U B?” to find anything close to Tomahawk getting the shine, as he does for the length of the aptly named track “Here I Am”, where he’s literally “stepping up” into the spotlight.

With DJ Muggs, Ralph M, T-Ray and DJ Lethal providing the production the entire album has a solid early 1990’s boom bap funk. If you put any song like “Doobie to the Head” or “Freak Mode” on a mixtape or playlist of rap from the era, it would fit in perfectly. The latter is also one of the few times it really feels like Tomahawk gets equal billing to Son Doobie in both the single and the accompanying video, but calling it a “single” exaggerates ever-so-slightly as it was the B-side of “The Funkiest.” I was surprised then and still am now they actually took the time and budget to drop a clip for it.

There’s one more thing we need to address about Funkdoobiest though and it’s lingering over the review like a black cloud — Son Doobie’s lyrical style. It’s certainly distinctive. It’s also the kind of flow that gets tiresome to listen to very quickly. It typically plays out in short bursts of the same word in two bars: funk, punk, trunk. It comes off stilted and a little bit cornball. “Like Barney Rubble, who’s always in trouble.” Son, was that the best punchline you could come up with? It’s infuriating because he clearly put thought into his rhymes — he just didn’t put enough thought into them. It’s like he said, “Oh yeah. That sounds good. As long as it rhymes, I’ll just keep going.”

“Where’s It At” is a damn good question. I probably appreciate “Which Doobie U B?” more today than I did in 1993, just because I’m somewhat nostalgic for Son Doobie’s awkward sounding ass, and the production is largely (though not always) on point. I see used copies of the CD going for $30 or more though, which is probably due to a similar amount of nostalgia and a small print run given that only one single from it did well on the charts at the time. Perhaps I should flip my own copy for a few bucks, because it’s “aight” but a MP3 copy would allow me to easily revisit the few songs I care about enough to do so.

Funkdoobiest :: Which Doobie U B?
7Overall Score
Music7.5
Lyrics6.5