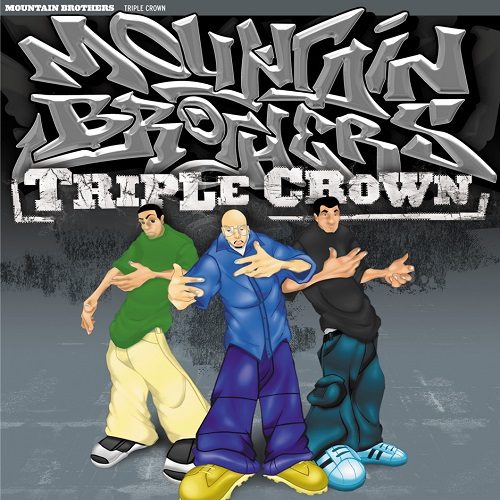 Standing alone atop a peak the size of Mt. Everest, the Mountain Brothers are the undisputed kings of Philadelphia’s independent hip-hop scene. It was a long hard climb to get there. After years of paying dues with tapes out the trunk and demos for every label in the stable, Mountain Brothers thought they hit a peak in the mid 90’s when they won Sprite’s “Rhymes From the Mind” contest and got signed to Ruffhouse/ Columbia. The peak was only a plateau though — the “Paperchase” single they released burned up the underground but the label wasn’t visionary enough to push them and ’98 saw the relationship go down in flames. Unfazed, the Mountain Brothers put out “Self Vol. 1” themselves through Pimpstrut Records, and climbed even higher thanks to an unexpected MTV indie label showcase featuring their video for “Galaxies.” In the years since, MB rapper/producer Chops has been blessing other indie rap acts like Bahamadia and Grand Agent with beats – leaving some to wonder if the Brothers had come down from the Mountain never to ascend again.

The long wait since ’98 is now over; so have no fear, the Mountain Brothers are once again here. “Triple Crown” perfectly surmises the way that Peril-L (pronounced parallel), Styles and Chops come together seperately to be one of the hardest hitting acts in rap’s big leagues. It’s simple mathematics, you gotta love it. Twenty-one MB’s tracks kill off a lot of whack motherfuckers. DJ Jay-Ski spins and scratches the Rakim quote forming the hook of “Microphone Phenomenal,” and Peril-L is not afraid to lay down the law on cornball MC’s:

Don’t sleep on Styles though – not a gangster, but definitely a gentleman of the puglistic rap arts who keeps the punches coming:

“You know what you shouldn’t oughta do? Try to contest
My rhyme texts is complex like Napoleon at Waterloo
Idealogical, profile psychological
When my squad drop a new record you need to cop a few
Slay lots of dudes and that is why I’m phenomenal
When I gets through you’ll be wishin your moms swallowed you
Mission impossible, sicker than when you caught the flu
Like Tupac and Q, I’m droppin you, now I got the +Juice+”

There’s no letting up on the follow-up track “I’m Talkin Bout You.” This track is Styles chance to shine solo, and he gets even more vicious when he doesn’t have to fear showing up his MB brethern:

“Styles Infinite, I’m steady pullin catses cards
You think you’re dope cause you’re average in a below average squad
Wanna diss but can’t approach — hidin like a phantom ghost
An emperor in your mind and like no skills and no clothes
My name is Styles, daily dissin whack bitches
I tapped your mistress, yes I have pictures…”

Don’t think Chops is just chilling in the background though. On “Hostile Takeover” the deep voiced member of the trio again show-and-proves why he ranks with Diamond D and Celph Titled as one of the best rapping producers on the M-I-C:

“Restore the balance, time or talent, the rest got to go
You’re not hip-hop, you’re a pop-ass ho that can’t rock a show
Make you confess face to face with the greats where you copped your flow
Then what? Put in on the news so your mom and pops can now
Throw a public humiliation parade, death penalty
for biters, sick writers, and so-called industry insiders
A show of force, with no remorse, bring many changes
like snipers that shoot you on sight for usin trendy phrases”

It almost goes without saying that the rest of the tracks are this well crafted lyrically, from the funked out solo “Peril-L Universe” to group cuts like the bouncy “Can’t Miss” or the b-boy head-bop anthem “Yes Yes.” It’s rare today in major OR indie rap for an album to keep getting better the further in you go, but from “Madness” featuring DJ Kwestion to the closing “Microphone Phenomenal” remix by DJ Cheapshot from Styles of Beyond, it’s nothing but hotness. The aptly named Beatnuts style track “Opin Wide” with DJ Jay-Ski won’t fake the funk on a nasty dunk, it just dishes off to Chops for him to throw it down for delf in your FACE:

“Chops burn the house down, rebuild it from the ground under
Run through your town, catch pounds and bounce like flubber
Hotter than a Stevie Wonder summer; makin tracks
to spank that ass like, ‘Thank you can I please have another?’
A number of hip-hop lovers listen to my disc and discover
The shit I write tight like hip-huggers
Bust the type of rhymes to make your eyes bug out, like Chris Tucker
Face stunned ‘The Color Purple’ like your name was Danny Glover”

By giving each member of the Mountain Brothers time to shine on their own but keeping the group aesthetic in tact for the album as a whole the Mountain Brothers have expanded on the qualities that made “Self: Volume 1” an underground rap classic. The only glaring mistake, if you could call it that, is wasting our time with a few unnecessary skits that just keep the listener from getting to dopeness like “The Roli Rho Show” and “Forest Gumption” a little longer. Once again, the MB’s show that Illadelph is not the city to sleep on. If you thought it was all about Schoolly D and The Roots, it’s time to elevate your ears to the peaks of the Mountain Brothers.