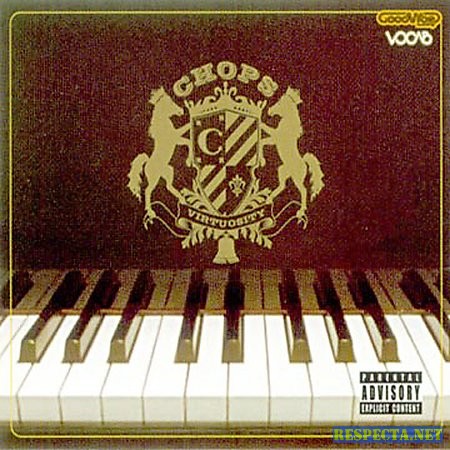 Among underground rap’s musical kingpins, Food for Naught” in 2003, Chops served notice to hip-hop that the self-proclaimed “Magnificent Butcher” would be cutting shit up for years to come.

Not one to rest on his laurels though, Chops was already at work on a new album even as the first solo release was banging on the rap scene. While Vocab Records and GoodVibe may be claiming that this is his first, don’t believe the hype. On the other hand, don’t doubt it either. While the first time around was definitely impressive, Chops got dealt a new hand and is upping the ante this time around. You can’t front on the impressive roster of guests contributing to “Virtuosity” – Bahamadia, Mystic, Planet Asia, Phil the Agony, Ras Kass, Raekwon and Talib Kweli among others. This leaves little doubt even to the uninitiated that Chops is much beloved among indie rap, although he doesn’t front on showing love to the fam. Remixing the classic “Thoroughbred” b-side to their hit single “Galaxies,” an intense attack of pounding low ends and beautiful piano riffs make the song brutally beautiful, not unlike Chops’ opening verse on the track:

“Kitty cats be jockin when they catch me in the hallways rockin
My tracks is like Jehovah’s Witnesses – always knockin!
Just when you thought you had all forgotten
The album is droppin, stoppin all of your cockblockin
Chops and MB’s is hittin off the meters
I lace tracks with the strings from Run-DMC’s Adidas
Cooler than water rice from Rita’s, your daughters fight to meet us
My rhythm has given hella divas the yellow fevers
You know the steez, chill like zero degrees
Folks notice me both locally and overseas
Those with ovaries, be standin close to me, hopefully
_Enter the Dragon_, essentially bag them like they were groceries”

Hot damn! It sounds even fresher now than when it first dropped back in the day. Despite his potential to completely upstage the guests on his album, Chops is hella magnanimous about sharing the spotlight and his dope beats with others. Right from the “Git Dat Mutha (Intro)” of this 70 plus minute opus all the way to the “Git That Mutha (Outro)” that closes it, you’re in for a treat. The opener is appropriately cinematic – a musical score that’s parts blaxploitation, martial arts movie, and action blockbuster. What follows is a true treat for hip-hop fans, a song that could just as easily have been called “The Chef Meets the Butcher.” Raekwon spits some of his finest on “What’s Fuckin Wit Us” in what will hopefully be a trend of the Wu’s hottest getting down with Chops:

“There he go again with his shit, who give a fuck if he rich?
I will yap that, nigga and his bitch
Comin through frontin he can get it, vivid-ness
Comin at y’all niggaz take dat, we want our paper back
We in the hood with the wolves with the wool on
The best made put-ons with the best made goods
Stop, flocked and locked, every block your great dame got shot
Oh you know it all look good
Stay up, we into sprayin niggaz, straight up, pay up
Fuck playin with him, make that nigga dead or I’ma lay up
He just a new player, kid just recognize I been Mayor
Been flippin cribs, killed different haters”

It’s some of the most graphically brutal Rae lyrics since “Criminology,” but it wouldn’t work without Chops providing a spartan melody in the back with a kung-fu style that could make RZA cream his jeans. That’s the way it goes on “Virtuosity” though – beats and rhymes designed to make the lesser competitors geal’ with envy or hot with enjoyment. There are so many styles to this aptly named album it’s hard to pin down just one. You can find a funk swing with smooth singing from L. Dorado on “Trouble.” Claps, hi-hats and horny horns are in full effect as Bahamadia swings her “B-Girl Session.” Grand Agent and Chops duet together on the appropriately named “Blockbuster Smash,” while Planet Asia does a dead-ringer for Slick Rick over the ren faire sounds of “Niggarachi.” Yes, you heard me right – he sounds like the Great One, and the music sounds like something you’d hear while washing wenches whip wiry lads and armor-clad knights swing swords. Is it unusual? Yes. Is it dope? HELL YES. As Asia himself says, “Even got the hippie dudes yelling out YIPPIE-DOO.”

If rap needed to be shown the direction to go in the year 2004, “Virtuosity” is as good a pointer as you would or could find. From the powerful simplicity of Chops beats and Baby Blak narrative on “Tears” to the funky and melodic freshness of Kanye West rapping to Chops tinkling ivories on “Changing Lanes,” it’s all good here. Yes, imagine that for a minute if you will – one of the hottest producers in commercial rap today, a man who coined countless hits for Jigga Jay-Z, is flowing not to his own beats, but the beats of Chops. Damn. If that doesn’t make a statement, what does? “Virtuosity” may not come out until January 27th, but you might as well pre-order right now because this is the one you’re gonna want to have in your hands the day it drops. As Dave Ghetto says on “The Remedy,” this album is “distinguishing between what’s hot and what’s not.” In 2004, Chops is clearly what’s hot.