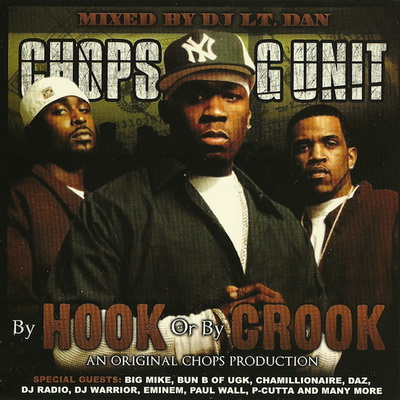 When beatmaker extraordinaires like DJ Premier, The RZA, and Daz Dillinger dub a producer to be hip-hop’s next up-and-coming phenomenon, it’d be wise to pay attention. Voila, the stage curtains open, and in comes Chops â€“ a humble-looking Chinese brother whose production credits include working with Raekwon, Talib Kweli, and the producer-of-the-hour himself, Kanye West. Originally one-third of the oft-praised Mountain Brothers, earlier this year Chops branched off and released the acclaimed “Virtuosity” that was well-received by many. Now walking down the trodden paths of DJ Danger Mouse and 9th Wonder, Chops presents “By Hook or by Crook”: a compilation of G-Unit remakes entirely produced by the man himself.

Mixed by DJ Lt. Dan, “By Hook or by Crook” is a musical venture that tries a hand at morphing popular G-Unit club-bangers into a mixture of smoothed out, lounge blends and thumping percussions. So what’s the verdict? Does it fly or die?

Well, with Chops’ help behind-the-boards G-Unit’s “Poppin’ Them Thangs” turns into a synthed G-funk party anthem, 50 Cent’s “In Da Club” transforms into a laidback club nouveau head-nodder, and “PIMP” morphs into a crunk, circus sideshow medley. Speaking of crunk, fans will likely appreciate the Southern flurry of hi-hats and rim-shots that add a boost of energy to “Patiently Waiting” and “Welcome To The South.” Even the romantic, neo-soul sitar on G-Unit and Joe’s “Wanna Get To Know You” had my head bopping â€“ considering that the original version hit my ears like nails scratching on chalkboard.

Chops’ musical talent really shines on Lloyd Bank’s “On Fire,” where the beat composer replays the hit song’s catchy loop on a vibrachord, adding subtle organs over it to boot. Later on “Stunt 101,” Chops dishes out a trunk-rattling bass that bangs like the Clipses’ Neptune-produced “Grindin” when it first hit the streets.

When arranging a hip-hop remix, it seems like many producers simply grab an artist’s vocals, close their eyes, cross their fingers, and slap random beats on top of them in the hopes that the two will mesh well. However, it’s evident that Chop meticulously plans out every layer of a song â€“ from the basic drum patterns to the overall sonic quality. And after listening to how dope Chops’ blends are, what really bugged me out was the eventual realization that there is not a single sample used on the entire mixtape! By combining programmed sounds with live instruments, Chops composes while others merely produce. Bass guitars, percussions, keyboards, synthesizers, even tinkering with a Jamaican steel drum or two — the man’s got talent.

So the question quickly arises: Why’d Chops choose to remix G-Unit? Whether it be Lloyd Bank’s ultra-baritone battle raps, Youngbuck’s southern twangs, or 50 Cent’s slurry gangsterisms — virtually all G-Unit songs fall into one of two categories: either a G-ed out “I’ma-kill-you-and-your-mom-dukes” ice-flossing club-banger, or a pretentiously mellow “I-need-a-girl” ditty complete with its very own annoying singsong chorus.

So why’s Chops wasting time remaking G-Unit’s greatest hits? Probably because he took a valuable lesson from Danger Mouse (“The Grey Album”) and 9th Wonder (“God’s Stepson”) – that is, if you remix a popular rapper’s album, there’s a chance that you may become more popular yourself in the process. I can’t hate on the formula. Lest we forget, before “Get Rich Or Die Tryin’,” 50 Cent first made a buzz on the mixtape scene by repeatedly jacking other rappers’ beats and throwing his own rhymes over them. It seems 2004 is the year where the tables turn: now producers are ripping off rappers’ vocals for their own musical experimentation.

But enough with the drawn-out analysis. Cop Chop’s “By Hook or by Crook”. If you absolutely love G-Unit and a 50 Cent poster hangs proudly on your bedroom wall, you’ll like it. If you detest G-Unit with all your heart and soul, here’s a chance to see the trio in a slightly different, more mellow light. If anything, you’ll probably regret not purchasing it when Chops becomes the next “big producer” that today’s “big producers” say he’s destined to be.