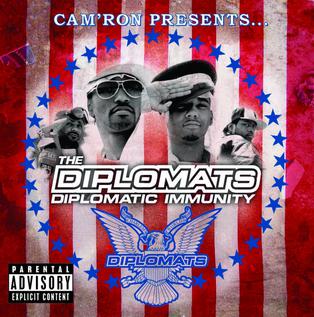 Diplomacy. At a time when the failure of diplomacy to resolve an international crisis has resulted in war and bloodshed in Iraq, it really seems odd for a hip-hop group named The Diplomats to be making their major label debut. Cam’Ron is introducing us to this new act regardless, hoping that his Diplomacy achieves succees others haven’t been able to reach.

The alleged newest member of The Diplomats though nearly kills off all hopes for Diplomacy before the album even starts. His name is Un Casa, but you won’t want him in the house for long. After repeatedly regurgitating the trademark Diplomats catch-phrase “what’s really good” several dozen times in the intro while begging to be on the album, Cam’Ron finally shuts him up by having Kanye West drop a beat. In what may be one of the quickest buzz kills in history, Casa wrecks any chance for shine by proudly proclaiming, “Taliban BITCH!” Say WHAAAAAAAAAAT? Not only is that precisely the opposite of diplomatic, it’s just pretty damn tasteless – even in a genre where rappers routinely compare themselves to Fidel Castro and Manuel Noriega. His braggadocious boasts following sound amateur at best:

“Whoa! Watch the flow, I’m the realest nigga spittin it
Niggaz talk hustle game, but I’m really gettin it
Anything I want and need, nigga I’m gettin it
745 Gucci topped with the stick in it
Ice is so clear, like the shit fish is swimmin in
I ain’t Diddy y’all but I’m strictly for the Benjamins”

After a time-wasting interlude by Juelz Santana, he gets down to rapping on the Heatmakerz produced “Who I Am.” They did a good job putting this song together, although they owe a large chunk of the credit to the O’Jays samples they used to lace it up. It’s a good thing too, because Santana is spitting ridiculous lines about pushing weight. Speaking personally for a second, I miss the days when rappers like Parrish Smith of EPMD bragged about NOT selling cocaine. Now it seems like everybody wants to be the neighborhood pharmeceutical kingpin – why? Nas may be right that the rap game is sorta like the crack game, but very few rappers can talk about it as convincingly as the late great Notorious B.I.G did; and Santana is definitely not one of them:

“I live the life of a loner, with a righteous persona
But still sell crack right on the corner
My life consists of, a big puzzle that’s mixed up
Big bucks, big drugs
If I get caught then it’s big cuffs
Big bail they get tough
I get out, shit what? The shit sucks”

He’s right, the shit sucks. To convince us this effort is worthwhile, he brags on and on about crying to show he’s a sensitive, vulnerable thug (who probably needs a group hug). Yawn, move on. The next track is titled “Ground Zero” and called “that 9/11 music” in the intro. Wait, didn’t your boy Un Casa brag about being Taliban a few tracks ago? Let’s see, Al’Qaeda backed the Taliban, and Al’Qaeda destroyed the World Trade Center. I don’t get it. Where do their allegiances lie, with the thugs and terrorists or with their innocent victims? In what may be a supreme act of irony, this is probably the best example of “diplomacy” on the album – someone who can take up both sides of an issue without alienating either side. Either way Cam’Ron undoubtedly believes his mediocre rap in the middle of this song is quite clever:

“Underground with people, lethal
Trapped in the +Desert+, surrounded by +Eagles+
Yeah, I see your bitch is impressed
My kicks is all fresh, the shit on my chest, by Mitchell & Ness
Got her open, hopin she’s not
I have her, crack in her tits, coke in her twat”

FYI, in the outro of the song they brag about being “Taliban DipSet” again – a last act of “Ground Zero Diplomacy” if you will. Strangely the concept of calling the album “Diplomatic Immunity” starts to make sense. Who but a drug dealer wouldn’t want that kind of untouchable status, and the ability to do whatever he wanted without any repercussions from U.S. law enforcement? Clearly these pushers turned rappers (or rappers turned pushers) want to be Diplomats, and on this album they are. That doesn’t make these “Real Niggas” any more interesting though. Although the track has another O’Jays sample that’s hard to argue with (it gives their music soul they themselves lack) the song is more meaningless bragging about how bad they are (Cam makes the disgusting claim his connects “move anthrax on Amtraks”) and how much money they have:

“I throw away 20’s on boots and stuntin
Waste 50’s and abuse my hundreds, I’m gettin money
I spend thousands on shoes for the Coupe, it’s nothin
Plus big truckin, to Ju’ it’s nothin”

The formula for Diplomacy is pretty clear by this point – spit as many run of the mill rhymes about how big they are compared to everybody else as possible, and rely on good beats to make it interesting. In particular, rely on the O’Jays – they do it again on “More Than Music.” They do mix it up a LITTLE bit though with the “Hey Ma (Remix)” though, which is built on the same beat as the original version. That’s right, it’s the Commodores instead of the O’Jays. This is what passes for the highlights on the first disc.

But wait, there’s MORE! After 50 monotonous minutes of disc one, this “limited edition double album” has another 55 minutes of Diplomacy in store. I guess nobody bothered to tell them that hip-hop double albums are a mistake unless you have the talent of Wu-Tang Clan or Tupac Shakur – and these guys don’t even come close. Their fascination with sampling gets a little more diversified here though; varying from Major Harris on “I Really Mean It” to The Moments on “My Love” featuring Freeway (his cameo is a refreshing break) to Dorothy Moore on “Purple Haze.” Unfortunately as good as the latter track is, it showcases another downside of this album and major label East coast thug records of late – everybody’s doing the “Cold as Ice” style that M.O.P. kick-started and Jay-Z made famous of blessing tracks with sped up or high pitched vocals in the background. Even when it sounds good, can’t anybody come up with an original idea?

Don’t expect rappers named Freeky Zeeky and Jimmy Jones to be the ones to be original though. They actually have the gall to re-interpret the Bone Thugs classic “1st of Tha Month” on the non-too-creatively titled “The First.” Do yourself a favor and listen to this one as opposed to the “Juelz Santana the Great” song that follows, because he’s definitely NOT. Once you get past the Heatmakerz produced “DJ Enuff Freestyle” with another 45 at 78 rpm sample to ride over, we finally reach the “What’s Really Good” track advertised on the album’s shrinkwrap. Although it claims to feature DMX, his contributions are limited to occasional vocal drops and contributions to the chorus. This is what’s really good? No. It’s followed by “I’m Ready,” which many have already heard by now on the “Dame Dash Presents Dream Team” disc packaged with “Paid in Full.” And yes, it has another fast sample in the background.

By this point, it should come as little surprise that a bunch of self-professed thugs and street chemists should link up with the man who turned an Eric B. & Rakim classic into a song about making crack. Master P and the Diplomats make “Bout It Bout It – Part III,” which is a welcome change of pace thanks simply to the slow beat it remakes from “Bout It Bout It II” with the same funk-synth whine; which means this is finally a song that DOESN’T have that over-abused “Cold as Ice” formula. It’s even good to hear from P. Miller busting raps on this track:

“I represent the South, now the world gon’ feel us
Worth fo’ hundred mill’, still thug with guerillas
I’m in the project posted up, like Toys ‘R’ Us
Retire my jersey 69 for every chicken I plucked”

It’s sad when a remake is as close to creativity as an album gets, but “Built This City” proves it. If you guessed without even listening to the song that the sample was “We Built This City (On Rock and Roll)” as performed by Starship, you’d be right. Not only that, the incredibly wrong references to Middle East regimes of terror continue as Jim Jones irritates the ears of the most forgiving listener:

“Aiyyo my DipSet Taliban, we on these streets
like them wars on them streets of Afghanistan
Better yet, or Pakistan – and to America, Harlem’s Al’Qaeda
Any problems I spray ya, not to startle the mayor
but in this fifty block radius, it’s get the rock and shave the shit
Or get the glock and blaze the shit”

Wrapping up this overly long album with “Let’s Go” featuring “Let’s Get it On” by Marvin Gaye, the only diplomatic thing one can say about The Diplomats is that they at least have good taste in old school funk and soul. Other than that, this is a hundred plus minutes of rap music that will not only insult your intelligence, but quite possible get under your skin like a nasty wood sliver. Any rappers who want to call themselves Taliban or Al’Qaeda are certainly entitled to do so by their first amendment rights to freedom of speech, but that certainly doesn’t give me cause to recommend their hardly believable braggadociousness that’s so ludicrous even Disturbing Tha Peace would take issue. In uncreativity, bad choice of concepts, and tiresome rap topics all combined together, the end result of their debut album convinced me that “Diplomatic Immunity” should be waived and these rappers expelled from the U.S. post-haste. Cam’Ron may just sink his finally blossoming career by being linked with these hacks, but if so he has no one to blame but himself.