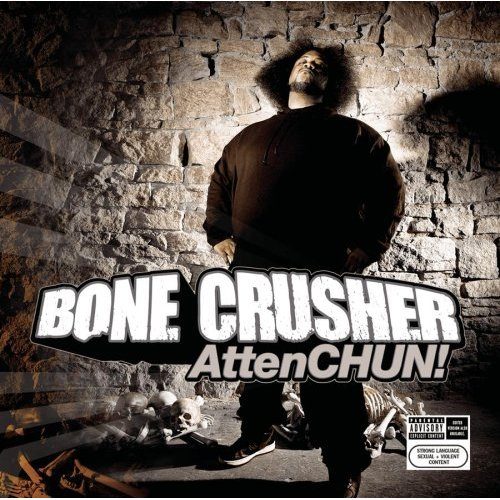 If you hadn’t heard of Bone Crusher before now, his national debut in rap came courtesy of the song “Never Scared” featuring Killer Mike and T.I. It never hurts to have big name guests on your first single, but what really got Crusher over was producer Avery Johnson re-using a familiar melody for the beat and pairing it with Crusher’s own militaristic rap delivery. Those who’ve heard Miracle or Pastor Troy will recognize his flow as kin to their own, but Bone’s baritone is much deeper than their own:

“Let a choppa go PLOOOOOOWWW! to yo melon
Now the plasma is oozin outta yo cerebellum
AttenSHUNNNNN! Fuck nigga, now you swellin
You ain’t talkin hardcore, now is ya? Lil’ bitch!
Got’em runnin scared of a… BIGGA NIGGA!
Cuz I put the heat to his ummm… HILFIGER!
Now on dat drank and on some of dat dank
Pistols gettin bursted now I need somethin to drank”

Unfortuntaely though, these lyrics are a fair indication of the fact that Bone is relatively unremarkable as a rapper. Despite the fact Bone Crusher has a hot first single, his writtens alone certainly can’t justify his chart position. In fact, Crusher’s album seems to be fairly repetitive. Start with the track “Grippin’ the Grain”: twenty-eight seconds of an instrumental introduction to open the song before any verbals. Then take “Gettin’ it (Get Dat Money)”: twenty-five seconds (well, at least they sped it up a bit). How about “Ghetto Song?” Twenty-one seconds before they start singing the hook. Of course getting off to a fast start is not necessarily better, when you’re writing hooks like the one for “Back Up”:

Repeat ad nauseum. Going through track after track of this album, one gets a feeling that Crusher is Lil’ Jon’s long lost cousin; which only makes it more ironic that the Southern icon shows up along with Chyna White on the song “It’s Me (Lane to Lane).” Crusher is fond of calling his rivals “fuck niggaz” but definitely doesn’t show one anything lyrically to give a fuck about here:

His style is certainly derivative of Jon’s trademark gutter language and Southern drawl, but Jon himself is intelligent enough to generally keep it to the hook of the song and let his guests and his Eastside Boyz do the rapping. Bone Crusher doesn’t have that luxury, so on track after track of decent Southern beats the music is thrown away by smack talking that’s at best uninspiring and at worst just plain tiring. Attempts to shore up the album with guest appearances like David Banner, Goodie Mob and Lil’ Pete can’t overcome the fact that Crusher is just an incredibly mediocre rapper with two gimmicks: he’sREAL BIG and REAL LOUD. What’s even worse is he tries to translate that from rap to singing on songs like “For the Streets,” which turns him into an even more annoying version of the Ja Rule shtick most rap fans are already tired of:

“This is for the streets, baby
Represent my niggaz on the grind, baby
This is gonna blow your damn mind, baby
Niggaz like us you can’t find baby, heyy heyy heyyyyy”

It’s hard to get across just how irritating this sounds, but let’s make it perfectly understood that his singing is so bad it makes Biz Markie’s sound GOOD. This album is a colossal waste of time. Crusher insults the intelligence of even the most dyed-in-the-wool Southern rap afficianado on dozens of occasions, who will have a hard as hell time overlooking sing-song lines like “Let me tell you what real niggaz do/if you ain’t hustlin, ridin, fuck you!” from “Sound the Horn,” though it’s still better than listening to him imitate the sound OF a horn – no kidding or bullshit, he really does. Listening to this album will only do one thing – give you a stronger appreciation for real Southern rap kingpins like OutKast, Scarface, Big Mike, Tela and Devin the Dude. While they write real lyrics with some actual thought behind them to go with their tight beats, Crusher relies on the beats to get his whack lyrics over. He talks a hell of a lot about niggaz and bitches, but even Kurupt’s stupid doo doo dumb line “bitch nigga, you more of a bitch than a bitch” sounds more intelligent than 95% of this CD. The other 5% was the parts where somebody other than him was doing the rapping.