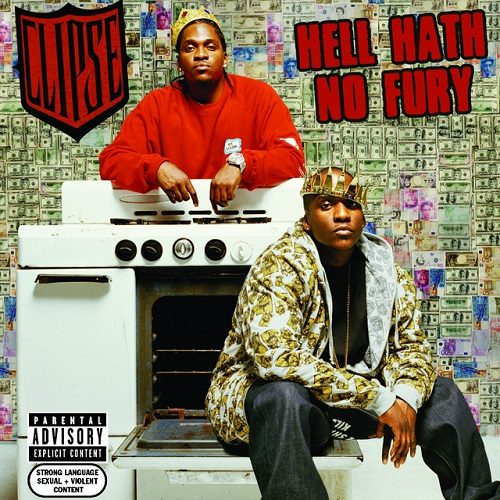 It’s difficult to find a starting point for the Clipse’s sophomore album. Should I take a straightforward approach and drop some background behind the album title and relate it to the content found within? Maybe readers would be better served by a summary of the oft-publicized difficulties of actually getting this album out and the Clipse’s mixtape grind in the mean time. Better yet, I could go into the re-emergence of cocaine raps in hip-hop and how the Clipse epitomize all that is good about the crack game/rap game relationship. Some guy named Pharrell would also probably be worth mentioning when talking about Clipse. The point is that for a group who is just barely dropping their second album, Clipse sure do give us a lot to talk about, more so than even the most established acts. Fans surely need no lengthy intro to be motivated to peep the album, and this group does have a large following of dedicated fans. Those people who are into the commercial aspect of rap need only listen to the lead singles to have plenty of motivation to cop this. So the best purpose an intro to Clipse could have is to convince those holier than thou underground fans that the combination of the game’s biggest hitmakers with the game’s most unapologetic drug dealers turned rappers is worth their hard earned cash. Well, all I can say is that no matter what preconceptions you have about “Hell Hath No Fury,” one listen is all that is needed to convince you that the Clipse have dropped one of the best rap albums of the year. Now, if my opinion isn’t worth much to you then you can sleep on the Virginia duo all you want, but be warned that you’ll end up playing the role of “Mr. Me Too” once you recognize the error of your ways.

The Neptunes are the top producers in the rap game. Whether you look at it from the standpoint of money made, hits, or celebrity status, no one can come close to the duo’s achievements. Even if you hate their music, you have to thank them for making the hip-hop producer the celebrity he/she is today. Without the Neptunes, guys like 9th Wonder would still be those dudes that made the beats and not celebrities in their own right. But despite what they’ve done for the role of the producer in the rap game, the duo has never come close to dropping a classic album of beats. They drop monster hits all the time, but when presented with producing a full album of beats (“Get Down or Lay Down,” “Clones,” “Lord Willin'”) the super-producers have never managed to rise above average. This has changed with “Hell Hath No Fury” as the Neptunes drop 12 superb tracks. Sure the short length of the album helps out, but you can’t deny the dopeness of the Neptunes this time around. “We Got It For Cheap (Intro)” couples some banging tropical drums with simple, soft synth line that allows the Clipse to sum up what they’ve been up to since the last album. The beauty of the track is that it’s as catchy as anything ever released by the Neptunes but doesn’t require too much energy from the rappers. “Momma I’m So Sorry” takes the same approach as the Neptunes craft a track that fits the Clipse’s cocky attitude without requiring the rappers to change their style.

“Mr. Me Too” was the album’s first hit and while the stripped down track has “club” written all over it, it still sounds like a proper Clipse track and not a ploy for radio play. Hence, the conclusion that in 2006 the Neptunes finally realized that they don’t have to be the stars on every track they produce. Rather than sound like a collection of Neptunes tracks featuring the Clipse, “Hell Hath No Fury” sounds like a Clipse album that happened to be produced by the Neptunes. Even playing the background, the Neptunes still come through with some truly original production. “Wamp Wamp (What It Do)” features steel drums literally dancing all over the track, but still sounds like a proper rap track. “Trill” is filled with synths that are absolutely filthy and scramble all over every frequency your speakers are capable of producing. Yet, while the same approach would sound amateur done by anyone else, it produces another certified hit for the Clipse. Overall, the Neptunes have come through with their best collective effort.

Of course, tight beats don’t mean anything if given to wack rappers, but the Clipse are anything but wack. Now I won’t front and say that Malice and Pusha T rap about anything new. In all honesty they rap about the same thing every other rapper is rapping about right now. The difference is that they do it so much better. The Clipse manage to captivate an audience the same way Lil’ Wayne has with his last two albums, with tight flows and witty lines that keep you begging for more. “Momma I’m So Sorry” could be your typical “Dear Mama” wannabe, but instead Clipse take their cockiness to another level, basically saying “I’m sorry, but I’ma keep doing what I do.” “Mr. Me Too” is the duo’s middle finger to the haters and imitators, with Malice getting especially vicious:

“Been two years, like I was paddy wagon cruising
Streets was yours, your dunce-capping and kazooing
I was just assuming you’d keep the coke moving
But I got one question, fuck y’all been doing?
Pyrex stirrers turned into Cavalli furs
The full length cap, when I waved the kitty purrs
All my niggas caked up, selling gray and beige dust
Have that money right or end up in the trunk taped up
We don’t chase a duck, we only raise the bucks
Peel money rolls until our thumbs get the papercuts”

So while the crew continues to address the same topics we’ve heard before, they do it in such a way that you can overlook the subject matter and get caught up in the style and cockiness. “Ride Around Shining” exhibits the phenomenon the best as the crew drops an anthem that amounts to brags about their cars, but Pusha-T’s hook shows that while they may have the same cars as other rappers, they talk about theirs in a much more interesting way:

“All I wanna do is ride around shining while I can afford it
Plenty ice on my neck so I don’t get nauseous
Float around in the greatest of Porsches
Fell like a chuck wagon cause I’m on 12 horses
And the three behind mine? They be the click
So much ice on they rollies, the shit don’t tick
Man, running through the summer, that’s what it cost me
While I’m shoveling this snow, man, call me Frosty”

Every track can be broken down the same way, which is not to say the group is monotonous, instead it’s a testament to their consistency and high quality output. “Dirty Money” is a ladies anthem, but instead of catering to the women in the typical way, the Clipse make a statement of sorts pointing out how the disapproval of the drug dealing lifestyle doesn’t stop people from enjoying the economic benefits it produces. “Hello New World” expresses the group’s well wishes for future rappers from their hood and almost serves as a glitzy updated version of “Virginia.” “Keys Open Doors” serves as an interesting play on words (reread the title if you have to) and finds the group mixing their crack raps with some social commentary. “Chinese New Year” could be another typical crime anthem had it not been for the style infused into the track, especially Pusha T’s hook:

“I’m at your door, your eyes are like why are you here
Judging by my steel I got something to do here
Give up the money or the angel cries two tears
Front of your crib sounding like Chinese New Year”

The album ends as dope as it began with the Clipse’s version of “Mind’s Playing Tricks” as Malice explains the nature of his “Nightmares:”

“They coming for me, they running up
I’m on my balcony, seeing through the eyes of Tony
They say we homies, but I see hatred
Do not they know brotherly-love is sacred
Niggas catch feelings, even contemplate killings
When you see millions, there are many chameleons
You’re not a gunner, for real, your just a runner
Haters I spot you from a far, and I’m the deer hunter
They be thinking nice car, nice crib
I be thinking, how long will these niggas let me live
I understand, cause people need things
And they will take it from you, and take you from your seedlings
So even when the mumble is talk
I still walk the most humblest walk
And one day, they may even catch up with me man
But til then, I’m Leonardo, Catch Me If You Can”

Once again it seems we’ve heard paranoia expressed by hustlers a million times since the Geto Boys made it a hit, but with the smoothed out beat and soulful vocals from Bilal, one can’t help but feel the Clipse’s pain and have a Tony Montana moment themselves. By the way, Pusha T’s verse on the track is a direct tribute to Bushwick Bill’s classic verse.

Describing the Clipse as dope is both a figurative and literal thing. And while I understand the apprehension many fans will have considering the hard core subject matter of the Virginia duo, there is simply no excuse not to pick up this album. The Neptunes have the beats down cold this time around, the Clipse are witty and gifted on the mic, and Malice and Pusha T (Pusha T especially) have got the hook game down to a science. While the usual result of labels pissing off rappers is a mediocre or shelved album, in this case all the delays have made the Clipse as hungry as ever. If the Clipse can keep up this level of output, there’s no reason to expect any more delays or label-related “fury.” Which leaves open only one question, will not having to deal with label issues and being able to concentrate purely on the music make the Clipse even better?