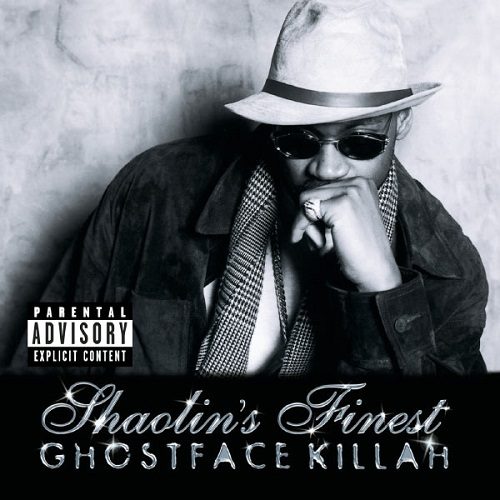 Greatest hits albums are all the rage. From LL Cool J to Shaquille O’Neal and the Fu-Schnickens, such compilations range from good to bad to just plain ugly – or from ugly to bad depending on your point of view. The bottom line is, few artists are of the caliber of LL Cool J, posessed with both the large catalogue of music and the depth of talent to justify such albums.

And that my friends, is what makes “Shaolin’s Finest” such a surprising treat. Even in a crew with as many colorful and charismatic characters as the Wu-Tang Clan, Ghostface Killah has always stood out as one of their top MC’s. Quality skills are what Ghost brings to the table every time the cards are dealt including a smoothly golden voice, an ability to write evocative narratives equal to those of Kool G. Rap or Scarface, and a willingness to lay his emotions bare in verses ranging from tender to shockingly brutal. Unfortunately it’s not always easy to tap into his dopeness, because his label Epic released some of the most confusing and erroneous tracklistings in the history of recorded music. Anybody who could make sense out of the back covers of “Supreme Clientele” or “Bulletproof Wallets” had to either be a nuclear physicist or an Epic employee – nobody else could possibly make sense of them.

Thankfully on this album, his last for Epic, they got it right. Nobody can really say whether it was their consistant fuck-ups or their lack of promotions that caused Ghost to leave the label, but if you’re playing “Def Jam Vendetta” you’ll see the flamboyant rapper and his impressive gold armpiece doing a variety of wrestling slams and holds on his new labelmates. What he left behind in the process was this CD, which really does cull the best of his solo work outside the Clan with incredible accuracy.

Starting with “Daytona 500,” a high speed power jam built off a riff from the Bob James song “Nautilus,” this song sounds just as good in 2003 as it did when originally released on “Ironman” in 1996. Ghost never lacks in lyrical ammo, and on this joint he threw razor sharp darts like “The conviction of my tape is rape, wicked like Nixon” while he “slapbox with Jesus, lick shots at Joseph.” Backed up by Raekwon and a surprisingly dope Cappadonna (better known at that point as Cappachino), the song was an instant hip-hop classic. While not released as a single, the track “Poisonous Darts” that follows is from the same album and equally as vicious. This time though, Ghost does it for delf:

“I pull stings like, guitar strings down in Spain
I’m so hyped Jakes label God ‘crack cocaine’
Why Equality Self God, yeah yeah you know it kid
Ricki fucked up, and G-Pac, blow his wig
he’s rockin Wu Wear, the latest in fleece uniform
He’s a newborn, look at money swearin like he on
But anyway back to furry kangols, Jamaican wallabees
My back is on the wall, bombin devils with trick-knowledgy
My heart is cold like Russia, got jerked at The Source awards
Next year two hundred niggaz comin with swords!”

The song that probably caught many Ghostface fans off guard at the time was “Camay.” A rough and rugged hip-hop ode to love set to a gentle piano loop and samples of Teddy Pendergrass crooning the words “Just another helpless fool in love, is what I am” the song seemed to be the penultimate opposite of the high-octane bangers Wu fans had come to expect. Ghost and his guests proved up to the task though, and on the closing verse the Killah injects some hip-hop attitude and edge into his protestations of love:

“You sexy motherfucker DAMN what’s the recipe?
You make a nigga wanna – GOD DAMN!!!
Can you cook darlin? At the stove you’re revolvin
Bake macaroni, turkey wings, a nigga starvin
Here take my number let me pull the chair from under
I had fun, plus your backyard speak with thunder!”

On an even more mellow note, the tender ballad “All That I Got is You” featuring Tekitha may be Ghost’s best known song from “Ironman.” For anybody who never lived through poverty and welfare, Ghost’s personal and touching raps put you right there, walking a mile in his own worn soles:

“And there was days I had to go to Tex house with a note
Stating ‘Gloria can I borrow some food I’m dead broke’
So embarrasin I couldn’t stand to knock on they door
My friends might be laughin, I spent stamps in stores
Mommy where’s the toilet paper, use the newspaper
Look Ms. Rose gave us a couch, she’s the neighbor
Things was deep, my whole youth was sharper than cleats
Two brothers with muscular dystrophy, killed me
But I remember this, moms would lick her finger tips
To wipe the cold out my eye before school wit her spit
Case worker had her runnin back to face to face
I caught a case, housin tried to throw us out of our place
Sometimes I look up at the stars and analyze the sky
And ask myself was I meant to be here… why?”

Jumping suddenly to the 21st century, the song “Child’s Play” is the the fifth track in a row produced by the RZA. For those early naysayers who dismissed his early success with the Clan as happy accidents, they can hardly argue with his incredible depth in this track. Sounding like the best of an old school movie or blaxploitation flick, the vibe perfectly matches Ghost reminiscing about “back in the days” and his early “puppy love” experiences; and even has the rapper giving a little ode to the Boogie Down Productions classic “South Bronx” in the process. If anybody had to break this streak though, it might as well be JuJu from The Beatnuts. His track for “One” from the same album was as good as anything his crew has done, and blended as perfectly into a Wu mix there as it does here. The lyrics are somewhat esoteric, but like his partner-in-crime Raekwon it’s a good excuse to replay dope tracks repeatedly; so if this doesn’t make much sense to you hit rewind:

“Tangerine sofa, two super soakers in the Rover
Hit the sport’s bar, tell a young lady to bend over {“one”}
Meditated yoga, powder ball, dancin with the vulture
Castor Troy layin for Travolta {“one”}
Yo, switch the lingo, five-nine-seventy
God glow, seven-fifteen, fall be ebony {“one”}”

“Malcolm” on the other hand was much more clear. Produced by “The Specializt,” he left no chance for misinterpretation by starting the song with a sample of one of Malcolm X’s speeches; nor did Ghostface by opening his verse with the words “I’m like Malcolm, out the window with the joint.” Ironically, the song isn’t a political diatribe at all except for the chorus stating “we gettin rid of all the prostitutes, Tony want the streets back” – the rest is more of an autobiographical narrative, which was probably what Ghost and his producer were really alluding to. As good as this song is, you may be tempted to skip over it just to get to “Apollo Kids” – one of the strongest cuts to appear on any Wu album. Ghost pulls no punches over the “Cool Breeze” samples by Solomon Burke, challenging “all y’all fake motherfuckers up in the joint [..] stealin my light.” When the question asks “who’s the best MC, Biggie Jay-Z or Nas” it’s not giving the credit due to rappers like Tupac, Ras Kass, and Ghost – and he knows it too:

“Since the face been revealed, game got real
Radio been gassin niggaz, my imposters scream they ill
I’m the inventor, ’86 rhymin at the center
Debut ’93 LP told you to +Enter+
Punk faggot niggaz stealin my light
Crawl up in the bed with grandma
beneath the La-Z-Boy where ya hid ya knife”

Sticking with the theme of songs from “Supreme Clientele,” the next track is the well known single “Cherchez LaGhost,” which mixed the songs “Cherchez LaFemme” and BDP’s “Jack of Spades” skillfully under the direction of Carlos Bess. While U-God makes his usual stream-of-conciousness rap cameo, this song is all about the thematic sound which carries you through the uncredited singing by Madam Majestic. The album then finally moves to Ghost’s most recent album, “Bulletproof Wallets.” “Ghost Showers” took it back to the old school with an interpolation of the song “Sunshowers” mixed with the sounds of Biz Markie’s “This is Something for the Radio.” Ghost gave warning signs of his plans to leave Epic hidden as jewels in this song:

“Yo, who got the biggest burner?
Ask the Terminator, Wes Snipes shit plus Ghost meets Vegas
Stage show magician, dip with with a bunch of candy
I got a lot of babies, y’all ain’t family
If y’all don’t hear me, y’all don’t feel me
My album is +Bulletproof+, y’all can’t kill me
In 2003 the lease is up
We on the block now, no need for y’all re’in up”

Closing with the songs “Never be the Same Again” featuring Carl Thomas and “Strawberry” featuring Killah Sin from the same album, the chronological order of the album and it’s excellent selection of tracks is highly appreciated. As great as this album is though, one can argue that the possibilities for an even GREATER greatest hits album have been missed. While Ghost was unlikely to record any new material for a CD if he was in dispute with Epic over his contract, it’s possible they could have unearthed some unreleased songs from the vault. Alternatively, the “missing in action” Ghostface songs cut from his albums before release like “The Sun” featuring Slick Rick and obscure promo songs like “Ghost Heard it Before” would have made excellent additions to the line-up. With enough cajones, Epic could have even contracted with other labels to include some of his best work in the Wu on other albums, or excellent cameos such as his work on the “Freek’n You” remix by Jodeci. Sadly for an album dubbed “Shaolin’s Finest,” neglecting these opportunities means that some of his finest work from the slums of Shaolin WON’T be heard, as strict adherence to only including songs from his Epic solos was followed to the letter of the law. Still his fans will appreciate this album, both for it’s vintage selection and for a tracklisting that finally makes SENSE. Unlike many greatest hits albums, this is not an end for Ghostface, but merely another chapter in an ongoing epic (if you’ll forgive the pun) saga.