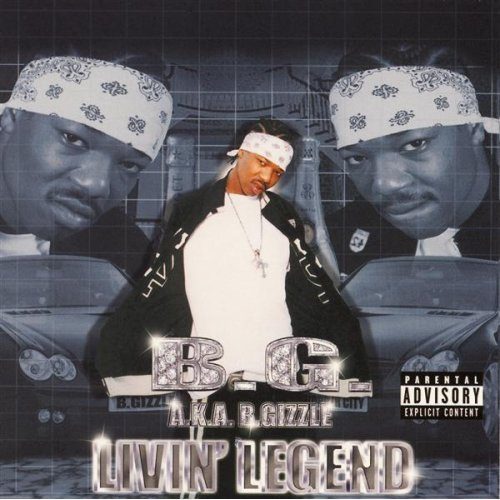 If the Hot Boys “Let ‘Em Burn” left any doubt about the future of the group on Cash Money Records, B.G.’s solo album “Livin’ Legend” on Chopper City/Koch Records definitely doesn’t. The intro of the song is quite simply titled “Fuck U” and it’s lyrics definitely leave one with the impression there is no love lost by the group’s ex-members for their label or labelmates:

Without a doubt, this record announces the return of B. Gizzle, the Hot Boy who in his own words “ain’t gon’ sugarcoat nothin” and “keep it all the way real.” It’s admittedly a little odd at first to hear the rapper who coined the phrase “Cash Money is an army” rapping anywhere else, yet the artist whose name once stood for Baby Gangsta could just as easily be a Ballin’ Gangsta now. He’s not out to get fucked by a label any more, he’s out to run his own. Unsurprisingly all of the artists on Chopper City Records contribute to this album: Hakim on three tracks, Gar on two, Sniper on three and a smattering of other artists throughout. It’s also not at all surprising there are no Cash Money artists here or even making cameos. Juvey may have gotten a shout out in the intro, but he’s probably so busy with his own UTP Records he didn’t have time to bless a track. That’s alright though, because on this album B.G. is clearly the star and not to be upstaged by anyone. His syrupy deep drawling voice can’t be mistaken for any other in rap, and dominates three straight solo tracks: “Clean Up Man Part 2,” “I Keep it Gangsta” and the anthemic song “Hottest of the Hot”:

“I ain’t seen a girl shake like a hot girl shake
From Detroit, Texas, to Orleans, to M-I-A
Alabama, Cash-ville or Atlanta, GA
They damn the do, I mean they do the damn thang
Down South raw, can’t forget rough and rugged
We be clubbin, thuggin, hustlin, and head bustin
Teeth platinum or gold, everyday dress code
T-shirt, Reeboks, bandanas and Girbauds
It’ll be uncivilized, don’t stick to the G-Code
Under twenty, ya ride natural, I’m on twenty-fours
Two-thousand-three black Hummer, H2O
415’s, DVD, X-Box TV’s
Mouths drop, I come through, heads turn, eyes bug
Like – ‘Whoa, who that is? He burnin up!'”

On each song, Kidd writes the music while Kidd and B.G. co-produce the track, and it creates a pleasant consistancy that will have the album’s deep bass reverberating in your speakers. B.G. has always sounded best over slow and dank beats that match his low rumbling and slurry voice, and Kidd obviously learned that and knows how to mix the formula almost as well as Mannie Fresh did. He hits the mark time and again on songs like “Batt ‘Em Up,” “Real Niggas & Real Bitches” and B.G.’s surprisingly touching song “My Son & Daughter”:

“Now my son, he ain’t three years yet
Oooh he can walk, and he can talk a lil’ bit
But I bet, when he get to that stage I’ll tell him
Don’t be like daddy, fuck up become a young convicted felon
Go to school, get education, say no to drugs
Though, still be a small Hot Boy, and a little thug
Fuck bitches, be bout money and duck snitches
Don’t let nuttin come between you and your riches
Respect momma, listen to everything that she say
It’s guaranteed to pay off on judgment day
Believe, long as I breathe, I’m here for you
To tell the truth I don’t want you to go through what I went through
My daddy got killed, on me when I was 12
FELL victim to the game, and gave grandma HELL
Back and forth to jail, stealin cars and shit
Smokin ‘gars and shit, botherin by the laws and shit
But uhh, believe, I’ll teach you another route
And, watch how good everything turn out”

B.G.’s fan base was undoubtedly already aware of his engaging flow and smart writing ability, but leaving Cash Money and starting his own label seems to have brought it into sharper focus. From more crossover oriented songs like the T.Smooth produced “Only 4 U” featuring Wyndi to hardcore head bustin songs like the Soulja produced “Do What You Do,” B.G. is hitting on all cylinders. He’s so on point in fact that the Chopper City recruits suffer by comparison, and although they’re competent at rapping none distinguish themselves to any degree except on the posse all-in song “Let it Flow.” The disc is surprisingly low on skippable material on the whole, and only “The Club Scene” skit is completely necessary to blaze through. The downside of such consistancy is occasional monotony – the tempo and beat pattern so well established that throwing a monkey wrench in the mix would have been interesting; such as a surprise appearance by Mobb Deep whom he probably still has ties with thanks to his rap on Prodigy’s “Y.B.E.”

“Livin’ Legend” doesn’t end when you finish the main album though. If you flip up the lid on the compact disc there’s a “Bonus Bootleg Disc” underneath that offers still more material from B.G. At seventy minutes long, this reviewer recommends you listen to these two discs seperately and not back to back, or else even a B.G. fan mind find the presentation a bit overwhelming. No production or musical credits are available on this set of material, so you’re left to guess who did what. Highlights include the swinging “That’s What I Want,” the explanatory “Fuck That Shit” where he officially retires B.G. for B. Gizzle, the surprisingly Mannie Fresh-esque “Been Doin This” and the deep bass and personal narrative of “In the Hood”; a song which seems to have drawn lessons from Juvenile’s occasional style of finishing every line the same way:

The presentation of the album is somewhat questionable in the end. Given there are as many good tracks on the “bootleg” disc as the “album” disc, the CD probably should have been packaged and marketed as a straight up double CD sold at a value price, with full tracklistings for both parts on the back. And like most double albums, it eventually just becomes much too much to take in anyway. B.G. could consolidate the best of these two into “Livin’ Legend 2.1” by taking a page from Jay-Z, but would undoubtedly be a little more selective in doing so and offer more exclusives that S. Carter did. Regardless the bottom line on “Livin’ Legend” is that B.G. probably worked on two albums worth of material between leaving Cash Money and forming his own label, and decided to put it all out in one big shot. In doing so he’s proven that Cash Money made a serious mistake by pissing him off to the point he’d leave, because the most talented Hot Boy next to Juvenile himself will “Bling Bling” his way through the 21st century. With the caution that this album is not meant for those who are not hardcore Dirty South rap fans, “Livin’ Legend” is a value worth shelling out YOUR bling bling for.