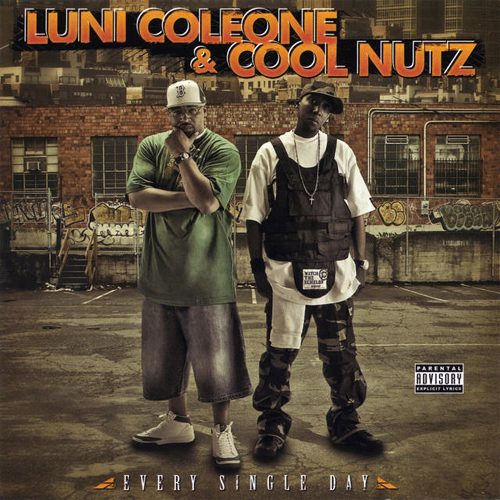 North Cali is bubbling. I’d like to get out there to see the scene, the strange musical mix of hyphy, g funk, gangsta, indie and alladat. For those too far inland to catch Left Coast radio waves, there’s “Every Single Day” for a nice artifact of the current bitches brew out West.

The duo wants play in the clubs and the cars, straight off. Tracks get both slow and low smooth and hyphy hype, a messy track mix of clear genre exercises, with tons of vocalizers, crazy flutes and space age funk all in there. There’s even some Raphael Saadiq type flavor (courtesy of Von Op) on the title track. So the generic Zapp rip-offs can be overlooked, as there’s too many moments that are great examples of hyphy, crisp funk and just plain hard shit. Bosko-produced “That Doe” might just be heavy metal for the rap people.

Don’t sleepâ€”Luni and Cool espouse the creative philosophy of “the truth over music.” But with possible influences like Too Short, Lil Jon, Fat Lip, and MC Ren, it’s got to be interesting. Even more, it manages to stay on the positive tip, at least for a â€˜gangsta’ album. A lot of the best and worst aspects lyrically, for better or worse, are truisms (though not tired) of a decade of rap music, both comforting and problematic. Why are we all still stuck in the egoistic greed of Reagan’s “make money money” eighties?

The second half of “Every Single Day” slows considerably until a triumphant reprisal of hyphy. “Cop a Room,” somehow both empowering and repressive to female sexuality and ambition, nonetheless features sweet slow sonics. As does “Come Get It,” a coying treatise to a cutie, straddling the always tricky edge between heartfelt genre-mixing or the Wu’s R&B (rhythm’n’bull-sh). Curiously, these two gentle tracks are followed by the tough love moneyoverbitches of “Ya’ll Don’t Know” (â€¦ “you really can’t trust a ho”). Is this a complete picture of the complex spectrum of Black male perspectives on sexuality, or just a hypocritical absurdity?

Eventually, the line between originality and archetype personas is crossed in a few too many verses, but the really real always comes back to the former in the end.

In sum: Good for the cars and the clubs. Not so good for headphones on a Tuesday afternoon. Cop it anyway if you wanna catch a glimpse of a specific time and place, heavily nostalgic but no less real.