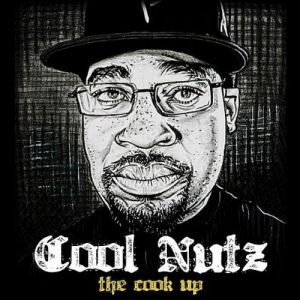 Cool Nutz :: The Cook Up

I don’t want to describe the Northwest Hip-hop scene as “burgeoning” or “growing”. It’s true that the Northwest hasn’t contributed a superstar name to the rap game since Sir Mix-a-Lot, but it’s a scene that has been grinding and putting in work for the past few decades. Enter Cool Nutz, who has been putting pestle to the mortar for Northwest Hip-hop for close to two decades. If there’s anything I learned about the Northwest, many of its people have a fierce pride in independent development. Things are to be done their way and grow with their people. It’s pretty similar to Cool Nutz’s game plan in Hip-hop, to put the Northwest on his back and showcase it to the rest of the world.

The title of Cool Nutz’s album could refer to a couple things. “The Cook Up” could refer to the traditional street terminology of making crack rock from coke and baking soda. “The Cook Up” could be a metaphor for the well-simmered mixture of mostly Portland-origin producers and guest rappers. The culinary symbolism could be furthered as a sign of Cool Nutz’s 20 years of marinating in the game. “The Cook Up” is a culmination of all these things. It’s a street record that places as much emphasis on gangsta shit as it does with putting Portland on the map, and Cool Nutz’s flow and delivery definitely show a seasoned approach in creating a rap record in today’s Hip-hop market.

The album starts off with its title track “The Cook Up” produced by HI-Q and showcasing Cool Nutz speaking about that crack game. His flow is measured, refined, and weathered. It’s not flashy or dripping with “swag”, but it’s clean and it’s easy to listen to. The lyrics aren’t mind-boggling ill, but the punches hit with enough weight to keep the listener interested. Cool Nutz does a good job of convincing the listener of his credentials as a rapper and presumably a crack dealer. HI-Q’s beat uses keys, strings, and bells to create a street anthem feel that offers the proper dÃ©cor to Cool Nutz’s gritty verses.

Tope takes over the boards in “The Gas Team” with Bosko and Pricy sharing the studio with Cool Nutz. Tope creates a simple beat that emphasizes the drumline with a single synth sound understated in the background. Cool Nutz goes first with his verse:

“I’m really on that legend rap shit
Gall of fame game that can tame a man quick
House of Pain mayne, they’re scared in this bitch
Boy Scout model, I’m prepared in this bitch
Green Lantern, rings around Saturn
Amazing stargazing, alluring rhyme patterns
Put the muzzle to, clown I will humble you
Hubble telescope hopes, I bring the trouble to
Example one million swag that is ample
This is real wordplay, niggas just ramble”

It’s a little ironic when he says others “just ramble”, since I find a lot of his verses have the same filler that most rappers need to keep their bars running, but Cool Nutz does bring some fire to his lines and exhibits enough confidence to keep the song interesting. Bosko and Pricy also do a decent job in keeping things rolling with raspy deliveries and some stone-cold punches.

DJ Quik does a guest spot behind the boards with “The Good Life” featuring Potluck. It’s the same ol’ fire from Quik with some high strings providing the setting for Cool Nutz, Quik, and Potluck to speak on their lives as hip-hop artists. Cool Nutz doesn’t try to overhype his status as an independent rapper, but he does showcase the virtues that hip-hop has bared for him. It’s a nice ode to “The Good Life” and it’s a nice take on the true humility and appreciation Cool Nutz has when it comes to rap. It’s nothing new, but it’s not a stale take, so it’s a nice highlight to this album.

Other high spots include “Tax Brackets” with Lawz Spoken bringing one of the best beats on this album, crafting some soulful melodies and soft drumlines that takes a page from vintage 9th Wonder production. Cool Nutz doesn’t have his usual oomph in his verse, but there’s enough grimy talk to keep it cool enough.

“Take Home Money” by Nonstop has the same keys used to make G-Unit songs, but it’s enough to have Fli Boi Moe and Kenny Mack to shine some Portland game with Cool Nutz. “Killin” with Trox features two of Portland’s most technically gifted rappers with Illmaculate and Only One. Illmaculate and Only One have the same clean schemes that they’ve showcased on the battle rap scene, and Cool Nutz switches his flow up to meet the bar set by his guests.

The entire album isn’t a success however, “Aint a Game” produced by Trox with guest spots from Maniac Loc and DJ Fatboy is a repetitive song that gets old quick. Cool Nutz starts slow, and the sample that separates his verse from Maniac Loc’s was more amusing than intimidating. “Never Met” features the first misstep from the otherwise impressive HI-Q. The beat has way too much going on, so much so that it’s a chore to focus on what Cool Nutz is saying. Cool Nutz’s proves that he can make a track about his ladykiller skills with “The Greatest”, but his lines in “Never Met” sound forced. “Never Met” is the last track on the album, which makes me feel like it was a hurriedly composed song that was tacked on at the last minute. It’s definitely not a good closer, especially when most of the tracks before it are all good listens.

In all, “The Cook Up” is a good introduction to those who have no previous experience with Northwest hip-hop. Cool Nutz makes a point to showcase the best that Portland has to offer in terms of beats and rhymes, and it’s left me with a newfound focus to never sleep on the Northwest. Cool Nutz as a rapper is above average, his guests definitely bring their A game, and the production hits the mark at a more consistent clip than most other albums. I definitely recommend this to anyone who hasn’t heard from Northwestern Hip-hop since “Baby Got Back”, the game has definitely changed for the better since then.