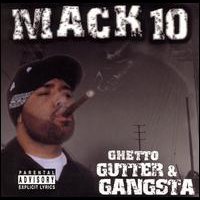 If rap fans think of anything when they think of Mack 10, it’s catchphrases. “Hoo bangin’.” “Wessyde!” “Gun hoe Mack one-oh.” “The chickenhawk.” “Inglewood swangin’.” The list goes on, as does Mack’s prolific career. Since first being introduced to the rap world by Ice Cube on his self-titled debut in 1995, 10 has released 7 solo albums or compilations, not counting his Westside Connection album with Cube and W.C. His status as a veteran of the hip-hop game and a West coast pioneer well established, 10 seems gradually to be fading to a role behind-the-scenes. Since his last solo album “Bang or Ball” on Cash Money in 2001, he’s been working on projects like “Mack 10 Presents Da Hood” which feature the next generation of artists who strive to fulfill his credo: Ghetto (true to your roots), Gutter (uncut and raw) and Gangsta (achieving success by any means).

Unfortunately for 10, “Da Hood” was a rather lackluster effort, with some bright moments by rising star Techniec and a lot of filler in between. 10 aims higher this time though and starts his album off right with “Lights Out” featuring his Westside Connection fam and Knoc-Turn’al on the hook. Damizza’s beat is not overwhelming, but it does give 10 the room to flex his G properly:

“I keep a nine millimeter cocked and ready to blast
So when the phone jump off, a nigga ready to smash
I drink my ‘gnac out the bottle, I don’t fuck with a glass
And I ain’t set-trippin dawg, that’s a thing of the past
And I stay in good shape, so my stamina last
And put hands on a muh-fucker bout my cash”

K-Mac from The Comrads shows up next for a solo track, “K to the M.A.C.” Young Tre’s beat will give you the ghost of G-Funk tracks of the past, but it doesn’t stop with this blast. If you aren’t immediately reminded of “The Watcher” on Da Hood’s “Please Believe It” featuring Money Grip, you need to get a late pass and go pick up a copy of Dr. Dre’s “2001.” Unfortunately that’s the problem with giving Young Tre a lion’s share of the production duties on “Ghetto, Gutter & Gangsta” – he’s clearly derivative as opposed to innovative. B-Brazy’s “Figaro Rida” would be more interesting if the beat didn’t borrow from Tha Dogg Pound and the rapper didn’t borrow from Suga Free. “Ain’t Got a Penny to Give” by the Young Hoggs screams DJ Quik. Even when you can’t put your finger on it on songs like “Gangsta,” you’ll get this uncanny sense of deja vu that you’ve heard it all before.

What’s really disturbing though is that Mack 10’s line-up of players has actually gone from AAA (some just about ready for the majors) to AA or less. Some clearly wouldn’t make the cut playing softball. Just take songs like the Damizza produced “Dirt” where he raps with Fat Joe and Mack 10, and notice how the latter two music industry titans outshine many artists 10 has taken under his wing. Joey Crack’s rap has the style and flair that a lot of these G’s lack:

“We the click that made the Trizz anthem
I know I got you sick when you heard the kid’s shit’s platinum
(Cha-ching!) We Thuggin’s killin ’em dead
Tell the bitch watch her teeth while she givin me head
We on the bed with the Gucc’ covers
Cut her so bad, made her think I was Slimm Calhoun’s brother”

The same problem is self-evident on E-40’s “Double Fisted” featuring The Mossie. I believe in Mack 10’s mission to spread the wealth and to push a new group of MC’s to the forefront, but it’s a mistake to put them on the same album with E-40 because the Vallejo veteran upstages them all. The question you’ll be asking after this song is not where Da Hood was on this cut, it’s where the hell E-40’s new album is hiding:

“In the V.I.P., twerkin and eatin some chicken wings
Surrounded by a whole bunch of pretty young tender things
Smokin and tokin and pokin game at the brigadales
Talkin on the T-Mobile phones; the Nex-Tiggadale
We don’t say fo’ shizzle no mo’, we say fo’ shiggidale
E-40 Fonzariggidale”

Do any of the lesser known rappers impress at all on this CD? Few and far between they may be, but there are a few. Turf Talk’s rap is pretty gangsta cliche on the Droop-E produced “In the Heart of the Ghetto” but he’s got an original vocal tone and good flow. King Tech’s Troutman-esque track for the Reservoir Dogs on the “S.O.O. W.O.O. Remix” helps, as does Mack 10’s guest appearance. The Young Hoggs “Weed Song” is pleasantly inoffensive, even though Young Tre is clearly ripping off Dr. Dre again – this time borrowing from “The Roach” on the original “Chronic” album. On the whole though this album exhibits the same problems that “Da Hood” did previously, only this time Techniec is AWOL and can’t lend vocal or lyrical support to prop it up. The production is a little better, the guests are tighter, but the album leaves a listener asking the same question they did after the last Mack 10 compilation: when’s the next REAL Mack 10 album? Unless your proteges are as tight as you are dawg, save us all the time (and money).