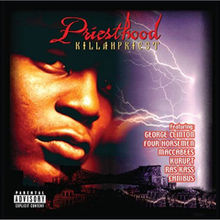 At one time Killah Priest was one of the highest profile members of the Wu. He first appeared on the Gravediggaz debut album “6 Feet Deep” in 1994 and raised his profile on Ol’ Dirty Bastard’s “Return the the 36 Chambers” in 1995, but his song “B.I.B.L.E.” on GZA’s “Liquid Swords” album really caught the attention of Wu-Tang Clan and hip-hop fans alike. They appreciated both his well crafted lyrics and a gravelly voice that made the young MC sound eeriely like a wisened old man. While he could be heard on Wu-Tang Clan’s “America” from the “America is Dying Slowly” compilation and the obscure “Greyhound Part II” from a Jon Spencer Blues Explosion remix EP, most heads kept wondering why the Wu didn’t hit him off with a solo album. 1998 finally saw their wish come true with the “Heavy Mental” album, with RZA-esque production from 4th Disciple, True Master and Y Kim and guest appearances by GZA, Inspectah Deck, and Ol’ Dirty Bastard. For a second tier Wu-Tang Clan member who didn’t even get name-checked in the long intro to “Clan in Da Front” from their debut LP, the fact his debut hit #24 on the Billboard charts may have surprised some. To others it was validation of the theory that attaching the Wu emblem to any album’s cover would make it sell. Rap heads just smiled at the second-guessing and bopped their heads to dope beats and rhymes like “One Step” and “Fake MC’s.” Whether a Wu-Tang junkie or not, “Heavy Mental” was one of 1998’s must have albums.

Despite this success (or perhaps because of it) Killah was on his way out with the Wu-Tang. Guest appearances were fewer and farther between, and his follow-up album “View From Masada” had none of the major Wu-Tang Clan MC’s making cameos. Hardcore rap fans though were happy to hear he had been enlisted as a member of the rap superstars Four Horsemen, and that group’s members Canibus and Ras Kass both made strong cameos on his CD. The album received little promotion though, the single “What Part of the Game?” quickly came and went, and tepid sales were ultimately the nails in a coffin for his contract with MCA; a contract that only existed as a result of his prior label Geffen disbanding their hip-hop division to begin with. When no Four Horseman album was forthcoming despite all the hype, many suspected Priest’s career was stuck in limbo, unable to move forward either as a soloist or member of a hip-hop supergroup. At a time when the Wu-Tang’s support clearly could have bolstered his sagging career, no support was to be found.

Despite these obstacles, Priest persevered and released the album “Priesthood” in 2001 on the incredibly obscure Proverbs Music. How obscure? This reviewer wasn’t even able to find a copy of this album in stores until 2003. The saying “better late than never” is always wise, but it’s even more apt in Priest’s case. The intelligence of Priest’s verbiage can at it’s peak give the rhymes a timeless quality; in fact, calling them “rhymes” doesn’t really do them justice. While Priest does believe in flowing to the syncopation of a beat, at times he eschews the simplistic patterns of ending each line the same way in favor of a more poetical flow that better enables him to share his deep thoughts. That’s why in the “Heat of the Moment” Priest often shines the brightest:

“I’m tied up in the basement, blindfolded by nine soldiers
With rare paintings and fine sculptures, they spoke blatant
Their nine’s loaded, they put a gat to the back of the blind poet
I want to cry but I try and hold it, one of them notice
Crack me over the skull with a crime motive
They made a toast to my death, I rose to my feet
With the heat close to my flesh
May I say these last words to my enemies passing the Earth?
Laughing at my passion and merge, ‘Ok, kill me if y’all wanna’
Slay me and never play the corner, cold winters
You’re all gonners, tell your momma call the coroners
You get me, and God gets you, it makes sense don’t it?
In the heat of the moment”

At other times, Priest disguises a more basic rhyme structure within the complexity of his thoughts and delivery that carries the connecting link words past one bar partway into the next. It’s likely that just reading it won’t do the flow justice, but “C U When I Get There” is still a harmonious melody even Bone Thugs fans would relate to:

“Y’all heard the stories of the miseries
Rivals between enemies, there’s no love or no sympathy
Y’all heard the stories of the stress, death and debts
Project sex and welfare checks with tecs
Automatics, y’all saw the graphics
Well, I know y’all had enough of that shit
I wanna see thrones, I want a land of my own
I want a zone, finally found my way back home
Sit back and relax, readin my poems
While the sunlight hit and gleam off the stones
It’s only natural, I want castles and black jewels
I want statues and marble floors
That’s what I have toppers for
Open up Solomon doors
Surrounded by priests, scholars and moors
Say my name, dollars just pour
Not that fake paper money
But the coins that they take from mummies
Everybody in my world ’bout the age of 20
Smell a rose, taste the honey, no achin tummies
I could write about my miserable life, critical nights
Fought physical in the spiritual fight
Israelite, mystical type, like a Hindu in white
Let me tell you what my visuals like
Insights of a High Priest, mind’s deep as the blue sea
Purple robe, brown Cuffie is all beauty
Absorb the ruby from yours truly, truly”

Rap’s great orators transcend the musical background to draw you into their tales, whether narrating true life events or describing scenes inspired by them. Priest achieves that goal, but that’s no reason not to appreciate the dope beats found on this CD. Luminati, Nirocist and Nastee handle the majority of the album’s production. While you may never have heard of any of them, Priest’s album proves it’s not about big names behind the boards. Actually the big names are in front of it – George ‘P-Funk’ Clinton appears on both “Come With Me” and “The One,” while “Horseman Talk” features Four Horseman rappers Canibus, Kurupt and Ras Kass. This song may depress some though, since it shows the potential this group had if their vision had ever been carried to a major label debut. At times this album can be downright spooky. Priest seems to be channeling both the spirit and flow of Tupac Shakur at his ghetto illustrative best on “My Hood,” and again on “Thug Revelations” featuring the Maccabees. His verse is this song’s best and it may just give you cold chills:

“Fuck this world and everything in it
I ain’t gonna stop until my job is finished
And my words are infinite
My life is governed by a higher force
Sometimes I think I’ll end up like Christ and die on the cross
The sacrifice, close my eyes and the fire come forth
Start spazzin then I blackout, I’m grabbin my Mac
Clap at the dragon, the beast, that paddin my streets
It’s organized in the hood where we gaggin police
I wake up stabbin my sheets, see the monster grabbin my feet
Pullin me beneath, havin a head like Bill Gates
with a mouth full of platinum teeth”

This album has plenty of highlights. The soft guitar sounds and lightly tapped beat of “My Life” give him breadth to lavish details in your ear, “Theme Song” is majestic enough to be just that with a chorus bluntly asking “Have you really understood what Priesthood means,” while tracks like “Madness” and “Witness the King” will give you that understanding. The latter clearly shows a rapper striving for heaven yet living in hell, forced into a lifestyle he clearly can’t condone:

“As my soul gets darker, my guns will spark ya
Greet the night stalker, meet your fate
Bow and pay homage, I rap with a garment
Like one of the profits that’s teaching faith
One mistake and your life gets tooken, I’m from Brooklyn
Two blocks over from where Satan lives
Where my niggaz break in cribs and we shake your kids
Turn ’em upside down, ‘Where that bacon is?’
But we don’t kill toddlers, feel the revolver
On the side of the father or the mother
It’s time for you to suffer, I kill your brothers
Front and be laying under covers”

Easily his strongest work since his debut, it’s unfortunate that “Priesthood” received so little mainstream recognition or commercial success. As a rapper though Priest has continually evolved over the last decade, progressively polishing his flow to a razor sharp style that seems both rooted in the Wu-Tang yet also to have moved beyond it to an undiscovered degree. Whether those same fans from his Clan affiliated days support him now is uncertain, but despite the lack of love “Priesthood” proves that all he needs is a beat and a mic to continue making quality rap songs worth the investment of your money and the time it takes to finally track down a copy.