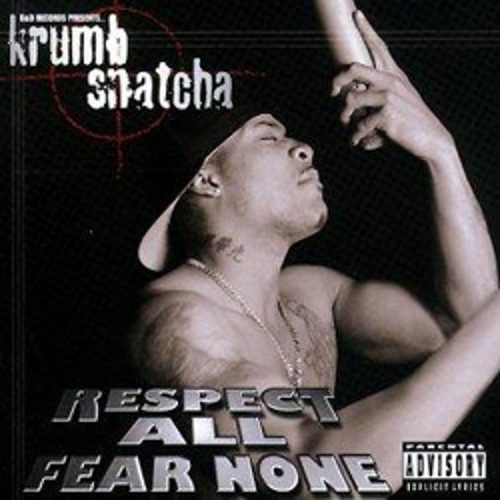 Krumb Snatcha :: Respect All Fear None

GangStarr fans and followers of indie rap already know the name Krumb Snatcha. His appearance on “Make ‘Em Pay” from the “Moment of Truth” album generated some buzz, but it wasn’t until his “Snatcha Season Pt. 1” EP with songs like “Hip Hop” and the industry critique “Gangsta Disease” that his profile got national rep. Dueting with M.O.P. for the song “W.O.L.V.E.S.” on the Training Day soundtrack only served to solidify his position, setting the stage for his full length album “Respect All Fear None” on D&D Records in 2002.

If there’s a template of underground hip-hop to follow when making a big splash on the national stage, Snatcha’s album follows it to a tee. This is not a bad thing though – who would complain about having an LP with producers like Alchemist, Da Beatminerz, DJ Premier, and Easy Mo Bee? There aren’t many rappers who have those kind of connections, but Krumb and his label clearly called in all their favors and cashed them for this album. The only downside might be picking which songs thump the hardest. Curt Cazal bangs hard on “Prison Life”, but “Streets is Calling” is the typical Alchemist track of beautiful instruments and hard beats. Both have to compete with Beatminerz bangers like “Rich Man Poor Man” and “Strike Back (Closer to God Pt. II),” but some may just declare GAME OVER when they hear Primo’s “Incredible,” on which Guru returns the favor to Krumb with a cameo of his own:

“Give it to Krumb, I live it up for my son
And you industry niggaz, you really lost it
First you slept on Boston then you kept on flossin
Shouldn’t do that, around us hungry niggaz
Cause we the chosen Godly warriors, tougher than rugby niggaz
Live lovely niggaz
Although the times is harsh, all my soldiers know it’s time to march
All you punks, huh, you better find a heart”

Krumb has no intention of being outshined on his own song, and thusly flips shit:

“A child with a destiny, ain’t no testin me
Mental menus send you a recipe
Chef like Rae how I bake a track
Give the streets mo’ yeast until the cake is back
Stack to my own bakery, why niggaz hatin me
Can’t see the fake industry makin me
Anti-flossin, poppin at the bar
This is ashy-ass knuckles and razors in the jar”

Krumb Snatcha clearly takes his rap credibility seriously, and it shows on the majority of these tracks. That’s why some people might find the Nottz produced “Oxygen” surprising. Snatcha calls it a “beat so strong need an asthma pump” but the truth is that it’s pretty damn boring. More than that, it’s a bad attempt for Snatcha to have a crossover club hit when that’s not even his core audience. It might be advertised on the album’s shrinkwrap, but most of his fans who buy this album will skip over this one entirely. In fact it kick starts a regrettably bad section of the album, continued with Omen’s monotonous “House Party” and Arabian Knight’s “Get Down.” Snatcha is clearly confused, trying to get jiggy when nobody who bought any of his records to date is trying to hear it.

Still, despite the lackluster wannabe pop tracks, the overall strength of this album is enough to win Krumb Snatcha more converts. By closing the album with “Rich Man Poor Man” Krumb manages to bring things back full circle, and will leave most purchasers happy they picked up this CD. His lyrics resonate strongly:

Say word. The intelligence of Krumb Snatcha shines through on this slept on gem, and though D&D Studios may not be around any more this D&D Records release is a fine testament to their legacy. “Respect All Fear None” is Krumb Snatcha’s mantra and the name of his album, and it works on both levels.