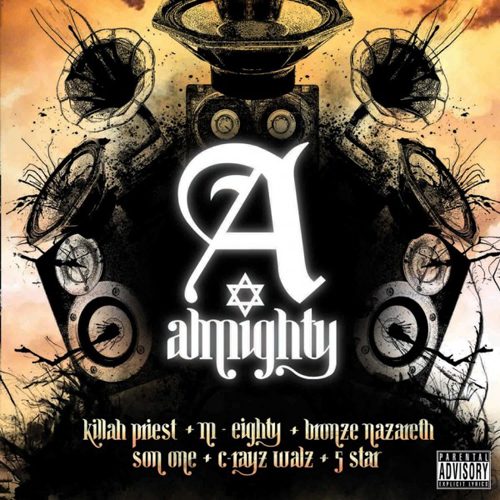 The left coast luminary Murs once noted, “Opinions are like rap careers â€“ everybody’s got one, and most amount to shit.” He was right, of course, as aspiring MCs are a dime a dozen nowadays, and rap “supergroups” aren’t far behind. Seemingly every rapper today has a side project working with some other rapper’s side project, leading to the supposedly larger-than-life and usually beneath-expectations collaborative effort. Some do work (see eMC or The Mighty Underdogs for recent examples), but just as often they fall flat, even when they have an authentic and reputable history of working together (213 comes to mind here).

So when the Almighty album shows up with a press release boasting about its six man line-up and dropping the word “supergroup” like 50 Cent drops label-mates, skepticism is the order of the day. Luckily, these guys have a lot of ammo backing them up. The first item in their favor is a strong line-up of MCs that actually makes sense and doesn’t seem thrown together just for shits and giggles. The group consists of Killah Priest, Bronze Nazareth, C-Rayz Walz, Son One, M-Eighty, and 5-Star. If some of those names don’t mean anything to you, don’t worry; they will after a quick listen. The next plus comes behind the boards, where production duties are held down quite capably by Bronze Nazareth and Preservation in particular and scratches are contributed by DJ JS-1 on most tracks. As with the MCs involved, even the lesser-known producers will have embedded themselves in your brain by the end of the album. The featured artists are equally impressive and include the likes of Canibus, Keith Murray, and Planet Asia, none of whom disappoints.

With all the elements in place, the only question that remains is whether they can bring it all together in a unified package. The answer to that is an unqualified yes. Most prominently, the music on “Original S.I.N.” is some of the most consistently banging stuff you’ll hear this year, with a sound that is simultaneously soulful, upbeat, and ominous. Think Jedi Mind Tricks meets Wu-Tang Clan and you’ll have an idea of the type of beats on display, which isn’t surprising given the MCs involved. What is surprising is how well producers not named Stoupe or RZA hold their own over the course of an 18 track album, but they clearly do.

Davey D contributes a lovely mash-up of horns, piano octaves, and vocal samples for lead single “Obey (The Statesmen),” which Planet Asia sets off with an opening verse full of his trademark intricacy. “Handle the Heights” is one of many bangers produced by Bronze Nazareth, but it sounds like a Stoupe production left over from “Rip the Jacker,” especially when Canibus shows up for a rare cameo appearance. Like the individual members of the USA men’s basketball team, all of Bronze Nazareth’s beats could be superstars in their own right on another album, but here they simply blend in with the stellar beats strewn all over the tracklisting. Some of his highlights include “Dead Flowers,” with its rueful violin melody and chopped up vocals, and “Killa Bee Swarm,” whose delicate layering is no less impressive for its subtlety. Even the painfully short “Interlude #1” is remarkable and proves his adeptness at manipulating musical input into refreshing compositions, in this case turning muted humming into a haunting melody and making an autoharp sound gully as hell.

And oh yeah, there are some guys rapping over these beats too, and they’re not half bad. Killah Priest’s rambling flow is potent yet again, and C-Rayz Walz sounds as impassioned as ever, but the revelation here is the performance of the less familiar names, particularly Son One and M-Eighty. Both MCs shine on every track they appear on, as Son One does on “Obey (The Statesman)”:

“Yo, these darts leave a grim scene
Watch the shark dive in like a swim team
I spit the science that’ll blind the mind of common thinkers
Thoughts as wide as vast knowledge, you can swallow liters
Replenishin’ life, a menace on mics, the sentence I write
Black out like dimmin’ the lights, yeah
A Killah Priest looked up at the sun/Son and said the prayer
A comet fell and Almighty landed on Planet Asia
Fans demandin’ flavor, my man organized
the squad to rise before your eyes
then slaughtered guys, the plan was major
Microphone Sinatra, playin’ my position
Listen, come up missin’ like the bones of Hoffa
Quiet storm, I perform till the fire’s gone
If I die I’m reborn in a higher form
Starvin’ like I’m malnourished, I sound perfect
Say my name, they hold me high like I’m crowd surfin’
Bow worship, my style flourish
Burn grass off the ground surface, lurkin’ where they found serpents”

That’s not even his full verse, but you get the picture. Perhaps the best that can be said of their performances is that they complement each other well and sound comfortable together, which is no small feat in a group that runs six deep.

If there is a flaw with the album, it is the lack of much variety in terms of subject matter. Sure, there’s the song for the ladies and a couple of story tracks here and there, but for the most part it’s all braggadocio through the lens of dark imagery, complete with violent descriptions and religious undertones. It becomes noticeable over the course of 18 songs, but it’s hard to fault them for their ferocity on the mic, especially when it is so skillfully delivered.

All nitpicking aside, “Original S.I.N.” is an impressive album on its own merits. With beats and rhymes that place them easily within the Wu-Tang/Jedi Mind fold and a viciousness to their lyrical attack, the Almighty have crafted an excellent debut album that stands above so many other projects that bear an affiliation with these legendary groups. Whether or not they have more music in store for us remains to be seen, but if they continue to perform at this level, there will always be a market for their work.