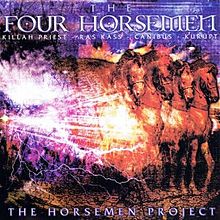 The Four Horsemen :: The Horsemen Project

Albums like Diamond’s “Grown Man Talk” and Killah Priest’s “Black August Revisited” are indicative of a growing trend in hip-hop. Fed up record labels, the RIAA or both, underground and indie rappers are pressing up their albums personally and shopping them directly through outlets like HipHopSite and Sandbox Automatic. They’re often not much to look at – slim line cases, ink-jetted CD labels, and hand-printed liner notes. It’s hard to deny the argument behind these quasi-legit homemade releases though when you have rappers who are internationally recognized and yet can’t get any publishing or distribution, and would give up 95 cents out of every dollar earned even if they did.

“The Horsemen Project” is another of these quixotic releases, but it has a deeper significance for hip-hop than most. Rather than featuring just one popular indie rapper, it features four MC’s who have ALL been signed to a major and had albums in stores nationally at some point in their careers. Canibus, Killah Priest, Kurupt and Ras Kass – they’ve each had big albums covered by RapReviews in the past. Rumors of their collaboration have been circling around the internet for a long time, with the details always changing but their group name staying the same – The Four Horsemen. In religious terms these apocalyptic figures represent Conquest, War, Famine and Death – charging on their mighty steeds and leaving ravaged earth and destruction any place they trod. For wrestling fans it may also evoke memories of Ric Flair, Arn Anderson, Tully Blanchard and Ole Anderson as a click of wrestlers who dominated NWA in the 1980’s. The line-up changed over the years, but the name and concept were so provacative it lived far beyond it’s original conception. Even today, Nature Boy Ric Flair is part of a foursome of fearsome grapplers dubbed “Evolution” that can be seen as successor to his exploits of old.

Either way you slice it, dubbing a group of rappers “The Four Horsemen” is bound to raise eyebrows. With the prophetic voice of Killah Priest one might suspect it’s strictly a biblical reference, yet on the third track “Leather Steeds” Ras Kass slips a wrestling pun into his opening verse: “Can you smell what The Glock is cookin’? Whip your +candy-ass+ with a dessert receipe book from Watts to Brooklyn.” It may just as well refer to both. What’s more important is whether this assembled collective of all-star power can achieve the dominance of their namesake, either way. It’s not entirely clear who put the beats together on this album, which at 38 minutes and 9 tracks is a little longer than some EP’s but more than a bit shorter than most full-length albums. Still with the busy careers each exercise outside this group, it’s amazing they could get together at all for 9 full songs. Things start out promisingly on “The Horsemen (Are Here)” with a majestic musical backdrop and pounding bass, while Canibus tells a tale of conquest:

“For I am your King, so shall it be
So shall I rule, bow before me
I’ve grown amongst thieves, lived amongst wolves
Fought amongst bulls, failed amongst fools
I’ve robbed from the rich and taken from the poor
I’ll steal from them both, that way I’ll get more
Sleep with many whores then see them no more
Oh my Lord I can’t wait until tour
I’ll march towards France, teach them to dance
Teach them about arts, wine and romance
I’ll stalk them with knives, torture their minds
Cause them to die then run off with their wives
I’ve lived for the day, do as I may
Then plan my escape for the day I’m betrayed”

“Shaky Love” follows this titanic opener, and is an immediate buzzkill. It has a 100 second opener with terrible singing, as a crooner who wishes he was Maxi Priest or Rell spends too much time proving to us that he’s not either. By the time Kurupt finally grips the mic, he kicks one of his retarded style “all over a motherfuckin bitch, ain’t this a bitch” raps that have caused people to question his lyrical competence in the past. While things do pick up steam on the aforementioned “Leather Steeds” and “Fourth Windz Blow” it isn’t until the sixth song “Revelationz” that they regain full form. Structured in a way that parodies Puff Daddy’s “All About the Benjamins,” the track features killer raps from each member with a show-stealing verse by Ras Kass coming third:

“Made it hard to figure me
Remi be, kickin me, in my asshole
Tyrant Fidel Castro
Slash Adolf Hitler, slash The Riddler
Slash ya windpipe, then I’m a snipe Bette Middler
Cause both ya’ll shows is wack, trash can
I’m half man, half ram like Pan
When John Hancock box, it’s like Mike Shamrock
U-F-C if you M-C
I’m every rappers nightmare like D.O.C. or D.M.C.
Lose my voice {*whispering* then I’ll speak silently}
Rather contract H-I-V than hate on me
This H-I-P-H-O-P
Fuck whoever H-O-T
H-I-T that nigga over the dome piece
With 16 bars
Vehicular manslaughter by 16 cars
32 bitches equals 16 balls
(hahaha) Almost famous, I fuck the program director
then wipe my dick on the playlist”

Concepts and verses this hot should have been what “The Horsemen Project” was all about. Unfortunately the quality of this release varies wildly, from the mediocre “4 Horsemen of the Apocalypse” to the pounding bass and ferocious attack of “The Fourth Seal.” By the end of the album it’s unraveling on “Cavalier,” with a beat that was poorly thought out which the members unwisely choose to mimic while an opening Kurupt verse again shows him to be the weak link of the group. It’s not that Kurupt is whack per se, but he’s spitting verbal pugilism like Mike Tyson while the other members lyrically float like butterflies and sting like bees. It’s a mismatch of styles that suggests Kurupt should be replaced with a rapper whose nasty lines have more to do with innuendo and metaphor than saying everyone is “more of a bitch than a bitch.” I nominate Chino XL, he doesn’t seem to be doing anything these days since being dissed by American Records and he already has previous ties to Ras Kass verbally. In the end it’s not the mismatch of Kurupt’s gangstafied rhymes and the spitting of the other rappers that kills this album – it’s a lack of impressive beats and songs that underwhelms listeners who should be expective sheer dominance from such a powerful quatro. These titans need some equally titanic producers – Kanye West, Alchemist, DJ Premier and Chops all come to mind. They shouldn’t abandon the concept of The Four Horsemen, but before trying again they need to go back to the lab and tighten it up a little bit.