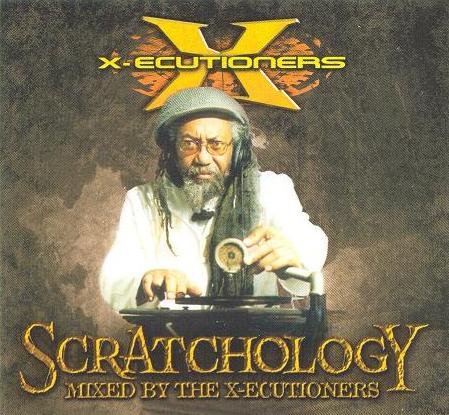 There’s really no better way to describe this album than with the words that what the artists who put it out wrote for it’s back cover: “The purpose of this mixtape is to educate people about the history of scratching and the scratch songs that have influenced the X-Ecutioners. It is by no means a comprehensive compilation, as there are many songs and artists vital to the history of scratching that are not included on this CD. However, it is a great introduction to scratching, its evolution, and the progression of Hip Hop from its origin to present day.”

Truthfully though, the X-Ecutioners are not giving themselves enough credit for the excellent work they did putting together this album. For a large part of this album these turntable maestros are playing host as opposed to performing, but few have ever put together a better slection of songs showcasing the art of DJ than this; and in hosting this compilation they’ve wisely chosen to include interview snippets from turntablism’s greatest practicioners. Simply put, the effect is that not only do you hear great hip-hop classics like “The Adventures of Grandmaster Flash on the Wheels of Steel” by Grandmaster Flash and “Military Cut” by Grand Wizard Theodore, you get to hear from Grand Mixer DST between tracks talking about the history. Don’t recognize that name? That’s why this is called “Scratchology” Dunn. Here’s a short primer though – if you remember Herbie Hancock’s “Rock It,” he was the uncredited DJ doing all those great cuts – and yes this song is included too.

Some of these classics are obscure enough that even hardcore fans of vinyl manipulation may have missed out. “Like This (Full & Fresh)” by Mixmaster Gee is a historically vital song that Rob Swift writes in the liner notes was not only the first recorded example of a back scratch, but the first time a DJ referred to his weapon of choice as a musical instrument. In fact the full title of the performer is “Mixmaster Gee & The Turntable Orchestra.” It might seem like common sense to recognize a DJ as a musician these days, but when this song came out in 1985 many people still took scratching for a joke – the whole ingorant “anybody can run a needle of a record and make noise” attitude. Of course, these are the same people who when presented with a turntable and a record moved the needle ACROSS the surface with the armbar as opposed to putting their hand on the vinyl and moving it UNDER the needle. Undoubtedly these idiots ruined a whole generation’s worth of records, but at least they learned the hard way that deejaying really WASN’T that easy.

Even if you’re not a lover of scratching in particular, a healthy apprecation of great hip-hop songs still make “Scratchology” a must have. The selection runs the gamut from old school jams like “Ugly People Be Quiet” by Cash Money & Marvelous to more modern songs like the “Product of the Environment (Remix)” from 3rd Bass (brilliantly featuring DJ Richie Rich on the ones and twos) and Public Enemy’s “Shut Em Down” remix by Pete Rock, mixed in a tributory style scratch by Total Eclipse. As one progresses further and further into the lessons of “Scratchology” the songs get closer and closer to modern day music, until one comes up on “Dilated Junkies” by Dilated Peoples featuring the Beat Junkies, “Felonious Funk” by D-Styles featuring Melo-D, Babu and DJ Q-Bert, and even “Premier’s X-Ecution” from last year’s “Built From Scratch” album. By the time you hit Q-Bert and D-Styles duet “Razorblade Alcohol Slide” at the end, it’s been one hell of a funky ride. Simply put, this undoubtedly is one of the best compilations that will come out this year, and one hell of a worthy tribute to scratching. It’s a must have for DJ’s, rappers, and rap fans in general.