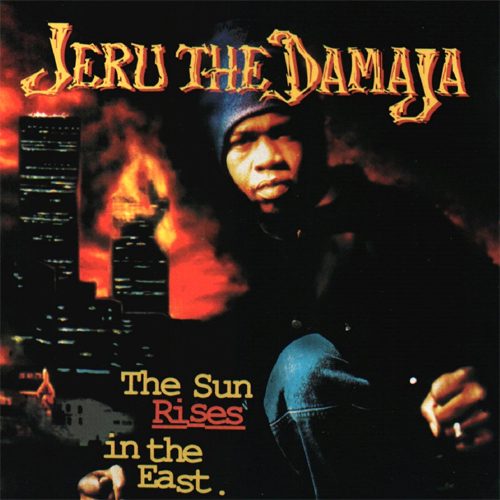 The Sun Rises in the East

Jeru the Damaja :: The Sun Rises in the East

A revolution dawned in hip-hop in 1994 that had been years in the making. It had started with GangStarr, the well known and much beloved underground rap group known for mixing rough and tumble scratches and beats (courtesy DJ Premier) with street smarts and lyrical intelligence (courtesy Guru). GangStarr was happy with their relative level of success in hip-hop, but felt compelled to bring along the next generation of MC’s both as a show of support and a recognition of the natural evolution of newer rappers surpassing and surplanting their elders. With appearances on their “I’m the Man” in 1992 and the follow-up “Speak Ya Clout” two years later, Jeru the Damaja seemed poised to fill that role. To those who caught their first glimpse of him on the former track, he may have seemed only to be a braggadocious rapper gassed off his own ego:

“Drugstore with more, dope rhyme vendor
Not partial to beef, the chief ambassador
Niggaz get mad cause they can’t score
Like a wild west flick they wish to shoot up my door
But I incite a riot, don’t even try it
Bust up chumps so crab kids keep quiet
Like I said before, I tap jaws, snatch whores
Kill suckers in wars, vic a style you said was yours
Moneygrip wanna flip but you’re fish
House the mic like your hooker and did tricks on the bitch
Dirty Rotten Scoundrel and my name is Jeru
Utilizing my tools in ’92
MC’s step up in mobs to defeat us
When we rock knots and got props like Norm Peterson”

Even as a braggadocious rapper, Jeru got notice for his booming, commanding vocal tone on the mic, and the incredibly crisp diction of his flow matched with his impeccable breath control. As the word spread that Jeru was preparing a solo album from the GangStarr Foundation to be produced by DJ Premier, heads started buzzing. What would a Jeru the Damaja solo album be like? When “Come Clean” first hit the scene in 1993, those who formerly dismissed him as just a braggart got a rude awakening. On first listen, many were mystified by the mix, which has been widely compared to dripping water and hammers banging on pipes. That, and a scratch of Onyx screaming “Uh-oh! HEADS UP cause we’re dropping some shit” for the chorus were the sole musical elements. Was it bizarre? Different? Totally unique? Hell yes, and what better way to set off a song literally designed to wash away fraud in rap. Jeru didn’t just come clean, he scoured away the grime of rap like a brillo pad gone mad:

“I don’t gang bang, or shoot out bang bang
The relentless lyrics the only dope I slang
I’m a true master, you can check my credentials
Cause I choose to use, my infinite potential
Got a freaky, freaky, freaky-freaky flow
Control the mic like Fidel Castro, locked Cuba
So deep that you can scuba dive/my jive’s
origin is unknown like the Jubas
I’ve accumulated honies all across the map
Cause I’d rather bust a nut than.. bust a cap
in ya back, in fact my rap snaps ya sacroiliac
I’m the mack, so I don’t need to tote a mac
My attack is purely mental and its nature’s not hate
It’s meant to wake ya up, out of your brainwashed state
Stagnate nonsense, but if you persist
You’ll get ya snotbox bust you press up on this
I flip, hoes dip, none of the real niggaz skip
You don’t know enough math to count the mics that I ripped
Peep the Dirty Rotten Scamp, as his verbal weapons spit
(Uh-oh! HEADS UP, cause we’re droppin some shit)”

Instantly the most quotable song in rap the moment it was dropped, it was almost a badge of pride for true rap heads to be able to recite the song word for word. His line “unplug it on chumps, with the gangster babble/leave your nines at home and bring your skills to the battle” was the mantra of rap fans who then as now were fed up with too much fraudulence in rap and not enough lyrical verbal skill. If his debut single was the wind of fresh air in hip-hop “The Sun Rises in the East” was a hurricane force gale by comparison. Clocking in at 13 tracks long and just under 40 minutes in length, this short album still stands tall as a titan compared to it’s peers. Building on the first single’s success, the follow-up release “D. Original” was just as hell bent on going 180 degrees in the opposite direction of rap’s mainstream. Premier crafted a beat comprised solely of an piano striking an off-key chord, and as unbelievable as it sounds it turned out to be pure musical perfection. Jeru rode those keys like a surfer coming under the crest of a huge wave, and the pounding sound crashed eardrums coast to coast:

“Before trains were graffiti proof I used to get loose
Dirty Rotten since the days of the deuce
Dirty, because of the skin I’m in
The fact I have melanin automatically makes me a felon
Even though I’m righteous, rotten’s what you’re yellin
But I’m not chain-snatchin, or drug-sellin
According to your books you said I would be damned like Kam
Scoundrel, opposite of the King that I am
But wanna get funny, we can get bummy
Take you to the East and back again money
Filthy putrified trickster past your sister
Challenge the Damaja, and you’ll be histo-ry
Mortal Kombat fatality
The original don’t sing no R&B
Nasty MC deity
Chop off domes, with the poems that come out of my pin-eal
gland, as I expand
You know who I am”

Two classic singles alone would qualify most rap albums for the hall of fame, but Jeru and Premier were far from done. The third was in fact the best of all, an epic superhero-esque struggle between good and evil dubbed “You Can’t Stop the Prophet” – and Jeru of course was the Prophet. Who were the arch-villains for our superhero? Hatred, Jealousy, and Envy – all lead by Mr. Ignorance. The song is a metaphorical joy to behold, and personifies the highest form of rap excellence. The beat dips low, soars high, and repeats endlessly under Jeru’s narrative; only to be occasionally broken by skits between verses featuring set-up moves to bring our rhyming superhero down. But you know what the title of the song says:

“I, leap over lies in a single bound (Who are you?)
The Black Prophet
One day I got struck by Knowledge of Self
It gave me super-scientifical powers
Now I, run through the ghetto
Battlin my, arch nemesis Mr. Ignorance
He’s been tryin to take me out since the days of my youth
He feared this day would come
I’m hot on his trail, but sometimes he slips away
Because he has an army, they always give me trouble
Mainly – Hatred, Jealousy and Envy
They attack me, they think they got me
But I use my super-science and I twist all three
I see sparks over that buildin – they’re shootin at me
I dip… do a backflip
Then hit em in the heart with sharp steel bookmarks
Ignorance hates when I drop it
But no matter, what he do.. he can’t stop the Prophet”

The funny thing about “The Sun Rises in the East” is that you can randomly start and stop this album at any point and not find a track any less compelling than the three singles spun off from it. In fact, one of the album’s best tracks was probably so brash that radio spins or MTV airplay would’ve been near impossible. The title? “Ain’t the Devil Happy.” And if you haven’t brushed up on your X-Clan vernacular since the 1990’s, here’s a refresher course – WHITEY is the Devil. The simple-minded (or Klan members) might be offended, when in fact it’s a powerful way to express the concept that for struggling inner city youth, Hell is not a far away place, it’s right here on Earth. And when you live in that struggle daily, in ghettoes that grew up out of the racism and oppression of wealthy upper class, that upper class is (at least then, and perhaps still largely so now) white. Jeru’s determined to rise above hatred and racism to a higher plane of existance, figuratively AND literally:

“As Devils search for the secrets to immortality
I alter my physical chemistry
Walk through the valley of the shadow of death
I exist even when no things are left
Vibrations transcend space and time
Pure at heart because I deal with the mind
That’s why I compose these verses
Audible worlds, my thoughts are now universes
Written on these pages is the ageless
wisdom of the sages, ignorance is contagious
So I hope you keep your focus
There’s no hocus-pocus, in the end, it’s just us
Devil got brother killin brother, it’s insane
Goin out like Abel and Cain
Wisen up and use your brain
There’ll be no limit, to the things that you can gain
In positivity, balance it with negativity
Until then, ain’t the Devil happy”

On every song, Jeru emphasizes the power of the most dangerous tool any man has; or as Ice-T once quipped, “My lethal weapon’s my MIND.” On song after song, from the lush and eerie “My Mind Spray” to his “Mental Stamina” duet with a newcomer named Afu-Ra, it’s all about springing the trap of sharp raps, so powerful “they slam harder than Shaq.” After getting used to this dangerous verbal artillery, seeing a song titled “Da Bichez” might seem oddly out of place on an album with more intelligence than a MENSA convention. Not to fear though, Jeru’s hidden some jewels in this track too:

“Now a Queen’s a Queen, and a stunt is a stunt
You can tell who’s who by the things they want
Most chicks want minks, diamonds, a Benz
Spend up all your ends, probably fuck your friends
High-post attitudes, real rude with fat asses
Think that the pussy is made, out of gold
Try to control you by slidin up and down on the wood
They be givin up sex for goods
Dealin with bitches it’s the same old song
They only want you ’til someone richer comes along
Don’t get me wrong, strong, black women
I know who’s who, total respect I’m givin
While Queens stand by you, and stick around
Bitches suck you dry, and push you down
So it’s my duty
to address
This vampiress, givin the black man stress
Recognize what’s real and not material
Or burn in hell, chasin Polo and Guess
Dumb bitches”

Ouch. Some female rappers should probably think twice about bragging on their baguettes and their Prada bags after hearing this song. Then again, everybody should re-examine their own lives more closely after hearing this album, from the “Life” intro all the way to the greasy dirty vinyl soul of the “Statik” closer at the end; with the appropriate Positive K quip “And I could rock a rhyme to just static” as the hook. Indeed, so could Jeru. After listening to “The Sun Rises in the East” and letting it set in the West, most rap afficianadoes would be spent by an exercise in pure oratorical and musical joy; or put simply, hip-hop this good comes too few and too far between. Sadly, neither does Jeru – while his rap career lingers on, it sounds increasingly more impotent and futile compared to his debut. If you have to check one entry in his entire catalogue start with this – his first and his best – and you won’t regret it.

Jeru the Damaja :: The Sun Rises in the East
10Classic
Music10
Lyrics10