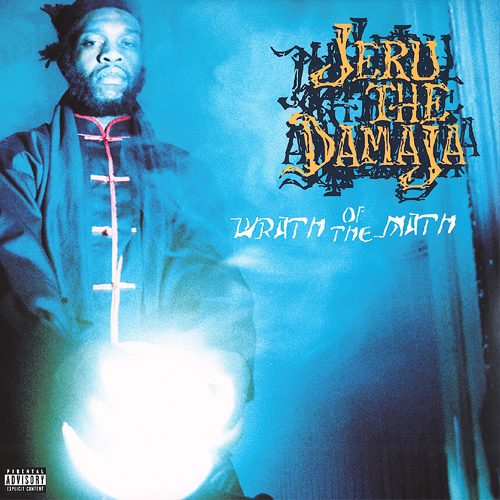 Wrath of the Math

Jeru the Damaja :: Wrath of the Math

After Jeru’s stunning debut in 1994, he was primed for a big letdown. For many people, his sophomore effort, “Wrath of the Math,” was lost in the shadow of “The Sun Rises in the East.” This is understandable, as his first album was groundbreaking and an inspiring twist on hip-hop’s formatted expectations. One constant remained for his second album, though, with DJ Premier producing the entire thing once again. Premier was at the top of his game, in a year when he laced three tracks for Jigga’s classic debut, not to mention the entirety of Group Home’s “Living Proof.” “Wrath of the Math,” though, is just as powerful an example of Premier’s greatness as nearly anything else. With Jeru on the mic, an emcee who’s style is tailor made to fit Premier’s offbeat production style from this period, this record is wonderfully realized and nearly classic.

Primo’s DWYCK-esque bassline opens the first song, “Frustrated Nigga.” Jeru picks off right where he left off on “The Sunâ€¦,” as a more recent, warped incarnation of KRS’ “teacher”:

“Systematic destruction of the original man
Drugs by nigga on nigga
Cocaine, morphine, nicotine
The evil of men run through my bloodstream
And the blood of kings runs through my bloodstream
This dignified bastard
Hazardous to the health of America
Black rebel in your area
Psychoanalyze this
Then send your forces ’cause now we mean business
You should now bear witness to a new brand of nigga
This nigga is smarter than the nigga of times past
This nigga is the nigga of the future
This nigga will emancipate himself from the title of nigga
And restore his title as king
So beware, beware, beware, beware
The frustrated nigga”

During a time when hip-hop was securely into the early stages of East coast gangsta rap, Jeru continued to swim against the current. On the incisive “One Day,” he takes names, hurting plenty of feelings over Primo’s melancholy violins:

“One day about six ‘o clock I’m woke up
By the sound of my buzzer and a car or a truck
Screechin’ off, so I jump up, scratch my nuts
But when I’m like ‘Who’s that?’ nobody speaks up
So I go to the door there’s a note it says:
‘We have Hip-Hop hostage with guns to his throat
Do the right thing and we might let him go
But if you call the police, that’s all she wrote
You know what the motive is, it’s all about dough
And in case you think we bullshitting here’s the photo.’ I couldn’t recognize the clowns because they was all hooded down
But I peeped Foxy Brown sippin’ Cristal in the background
With fake alligator boots on
And smack dab in the middle was hip-hop with a Versace suit on
I immediately called Primo
I said “hip-hop is in trouble, meet me at my rest on the double
Don’t even jump in the shower
Matter of fact, scratch my rest, meet me and D&D in a half an hour
And bring all your shit with you, ’cause you know what we got to do”

He goes on to fault Puffy for the kidnapping, and manages to get hip-hop back from Suge Knight after a trip to LA. It’s no mistake that Jeru was such a great influence to underground hip-hop’s inception, as he is clearly unconcerned with anything other than his vision of the truth. There are several brilliant concept songs on “Wrath of the Math,” such as “Bullshit,” on which he assumes the place of a jiggy emcee to mock those that are in it for the money. “Physical Stamina” is the sequel to the previous “Mental Stamina” with Afu-Ra, and features a pounding, heavy-metal production as the two trade verses.

Aside from “Physical Stamina,” nearly the entire LP is unified on the production front, with mostly uptempo tracks that are accentuated by the occasional slowly paced beat. All of the music on this record is catchy and intricate, and DJ Premier wraps each cut around Jeru’s distinctive, decidedly un-rhythmic style. If he had smoothed out the production more, it wouldn’t have worked with Jeru’s disjointed rhyme patterns, and he is able to find the perfect balance on “Wrath of the Math.”

Lyrically, Jeru takes a slight step back from his magnificent debut. There are a few moments which don’t really work, such as the bizarre “Not the Average.” Regardless, though, he is a unique and refreshing voice whose words are probably more relevant today than ever. “Ya Playin’ Yaself,” the single which strips the beat down to the rhythmic bass, has Jeru claiming that money is ruining even those who have a lot of it. He believes that the quest for cash throws too many people off of the path to true happiness, which is a message that holds plenty of truth today.

On “Wrath of the Math,” as with most everything from this era, DJ Premier is nearly perfect. Over the fifteen tracks, there is remarkable variety, and there are very few missteps. In fact, as hip-hop music goes, nothing here is uninspired at all, but Primo sets the bar so high for himself that it is impossible to maintain such brilliance across the entire LP. He puts up a valiant effort on every song, though, and comes excruciatingly close to perfection. “Wrath of the Math” isn’t his very best work, but it is near the top.

With his sophomore release, Jeru the Damaja falters slightly, but his musings are consistently intelligent and thoughtful. His odd flow (or lack thereof) perfectly fits Premier’s dramatic production work, and the fifteen tracks all contribute to the record’s cohesiveness and beauty. This is the last truly notable work that Jeru has done, and Premier’s involvement ensures its timeless quality.