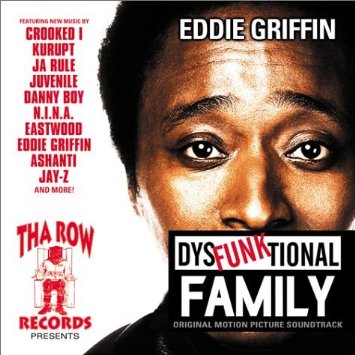 There was a time in hip-hop when Death Row Records was as well known for their movie compilations as for their artists. With a string of well-received all-star compilations like “Above the Rim,” “Gang Related” and “Murder Was the Case,” Death Row held it down for movies that needed a HARDER sound to their soundtracks. When Suge Knight went behind bars though, these deals seemed to dry up, as a lot of the talent on the label left for greener pastures.

Eddie Griffin’s “DysFuntional Family” may not be the biggest movie of the summer. In fact, to say the promotion for it is low budget is an understatement. Martin Lawrence’s “Run Tel Dat” was similar in it’s comedy concert performance scop, but had a bigger presence in theaters and in television spots. Of course, neither compares to “The Kings of Comedy,” except in one aspect – while “Run Tel Dat” didn’t have a soundtrack, “The Kings of Comedy” did – and so does this film. And going back to the roots of hardcore gangster-affiliated soundtracks, Griffin has called on Tha Row (TLFKA Death Row) to provide that credibility. If the movie doesn’t sell the soundtrack, maybe the soundtrack can sell the movie? Stranger things have happened in Hollywood.

The glory days when Tha Row was home to artists like Snoop Dogg, Dr. Dre, Tha Dogg Pound, Lady of Rage, Nate Dogg and 2Pac are long gone though. The last vestiges of that heritage are represented by Kurupt on the remix of “I’m Back.” At least, one takes it at their word it’s a remix – who ever heard the original? Still, any writtens from one-fourth of the Four Horsemen has the potential to be type nice; though with the infamous “you more of a bitch than a bitch” rapper they also have the potential to be mad stupid. This song falls somewhere in between:

Unfortunately, a lukewarm rap by Kurupt is not supplemented by the beat here, produced by the appropriate anonymous “Tha Row Hitters.” If they were taking major league swings though, one would suspect the bats are corked. They shell out a rip-off of soulful funk on what’s ostensibly another “remix” on the title track, with decent rhymes by Crooked I and Eastwood and mediocre singing by Danny Boy, a man who today as he was back then is a lesser version of Nate Dogg. The biggest surprise of the soundtrack to this point is the “Hovi Baby (Remix)” by Jay-Z, which one suspects has more to do with Griffin’s clout as a comedian than Tha Row’s clout as a label. Just Blaze chops the track up nicely, and Jigga flips his old verses with some new twists:

Things stay at this stronger level with Juvenile’s “I’m a Gangsta” featuring Skippa and Young Buck (U.T.P.’s recent addition to 50 Cent’s own G-Unit posse). Unfortunately this is somewhat symptomatic of the soundtrack – strong appearances from outsiders, mediocre ones from Row members. “We Ballin'” by Eastwood and Crooked I is as good as it gets, and the ridiculous “Who Wants to Fuck Tonight” featuring everybody and Ja Rule as the kitchen sink guest thrown in is the worst. When you hear raps like, “Aiyyo I once had a bitch named Chilli, and she wouldn’t do it my way so I slapped the bitch silly,” you’ll realize how skippable it is. Ashanti probably came with Ja Rule as a package deal, and if you like R&B her “All My” is probably okay, although it sounds like a weak imitation of Aaliyah to this reviewer, may she rest in peace.

It’s been obvious for a long time that Death Row (or if you prefer Tha Row) has been trying to replace the old rappers of their glory days with lesser imitations. For Snoop Dogg, we got Tha Top Dogg; and for The Lady of Rage we’ve got Gail Gotti, with “Gangstress (How I Roll).” Gotti? I’m sure I’m not the only hip-hop fan tired of hearing rappers and producers call themselves Gotti by now, as if referencing a reputed mob gangster somehow gives them credibility. Here’s a tip for Gail – dope rhymes would give you credibility, but biting Snoop’s “please, at ease” style from “Gin & Juice” doesn’t. And perhaps just to thumb their noses at Dre, his former protege Michel’le appears on the song “I Know Where I’m Going,” a surprising highlight of this album despite Tha Row Hitters on production. It’s all downhill from here, with no-names like Ganxta Ridd sharing the spotlight with Kurupt on “I Call” and wannabes like Phobia (doing her best Da Brat imitation) rapping with Crooked I on “Get Off Tha Block.” As you wind out this album, you may want to stop briefly on “I Thought U Knew” given The Dramatics make a guest appearance, but that’s about the extent of it. While nothing here takes whackness to an extreme, seventy-three minutes of material will make you realize if you didn’t already that Death Row’s glory days (and soundtracks) are long since over. If you can pick up Jay-Z or Michel’le’s songs on a white label 12″, you may want to skip this medicore release entirely.