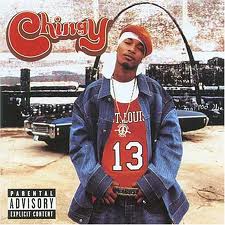 “Right Thurr.” If Chingy wasn’t from St. Louis, haters across the country would say that his first hit single from “Jackpot” was biting Nelly’s style. Since he can claim the Lou’ as his home though, that’s not so clurr. It may just be the way slanguage has evolved thurr, just to differentiate them more clearly from the East and the West coast. It’s certainly worked for Nelly Nel, since the master of “Pimp Juice” easily sells multi-millions any time he drops an album.

Whether the similarity of his speech is coincidental or intentional, Chingy certainly wouldn’t be mad at tasting a little of that “Juice.” And in order to hit the “Jackpot,” Chingy has doubled down on an extensive list of guest artists. I-20 and Tity Boi from Disturbing Tha Peace appear on “Represent.” St. Lunatic’s own Murphy Lee shows up for “Sample Dat Ass.” The sextafied “Holidae In” features Ludacris and Snoop D-O-double-Gizzle. Last but not least, the album’s closing “Right Thurr (Remix)” brings in Jermaine Dupri and Trina for extra flavor. It’s safe to say on this list alone, he’ll push a few hundred thousand units easily.

No album can reach gold or platinum status on guests alone though. Rap fans wants to know if “Right Thurr” was a fluke or if Chingy is packing more ammo in his musical clip. The good news is that the Trak Starz, producers of “Right Thurr,” handle all the production duties save for track 16 “Bagg Up.” That may also be the bad news. While the Trak Starz are functionally competent in that they don’t produce straight noise, they are no Jason ‘Jay E’ Epperson like Nelly’s main man. As a result this album has a St. Louis sound that comes off a little watered down. “He’s Herre” kicks bass, but the beat’s whimsical in a way only E-40 can pull off. “Wurrs My Cash” is pimpish, but not over-the-top funkalicious. “One Call Away” does better though with a hard pounding drum and a stripped down lick straddling the rap/R&B fence. And those who already heard the “2 Fast 2 Furious” soundtrack won’t be mad at the inclusion of “Gettin’ It”:

“I’m on top of my game, droppin the flame
My name, got me dodgin the fame
Watchin the dames, surround us when we poppin champagne
Cop the new Range, customs got it dropped on them thangs
Like that’s a shame, I’m countin thousands, dudes is poutin
Did a show in I-owa, backstage, girls is shoutin
Haters hate but it’s alright, if it’s a race then we won
Took some yurrs, to get hurr, now mama look atcha son
Blastin ’em witout a gun, just a mic and some beats
No mo’ eatin whurr it’s cheap, ad-just-in to fine meats
Women lookin like, “that’s him”, like they seen the Pope
Wallet full of crispy bills, now I’m never goin broke”

Unfortunately as enjoyable as this song is, it points out that the St. Louis style of speak still sounds best when spoken by Nelly. Truthfully one doesn’t get the impression Nel leans on it like a crutch to the degree Chingy is on “Jackpot.” Anywhurr that a wurrd can be hurrd with an ‘urr’ sound in it, Chingy’s gotta stick it in thurr. As such the tracks with guest stars end up being something of a relief, since Chingy’s style gets a little tiresome. Truthfully so does his voice, which lacks in charisma and distinctiveness. Truthfully so does his rap, which consists of typical playerisms and cliches of rappers getting endless vices – you know – cars, clothes, liquor and sex.

As a summer album, Chingy’s “Jackpot” is a take it or leave it affair. It’s relatively inoffensive, and certainly has some songs you’d want to play at a party, club, or while driving around. The main problem is that Chingy doesn’t have enough depth lyrically or the Trak Starz enough beats musically to make this one last for the long haul. “Jackpot” is a bit of a gamble and while it does pay off more than some competitors it’s not the Powerball sized hit that your ears can retire on comfortably. After enough of Chingy you’ll be quick to reach for that slot handle again and hope for a bigger payout.