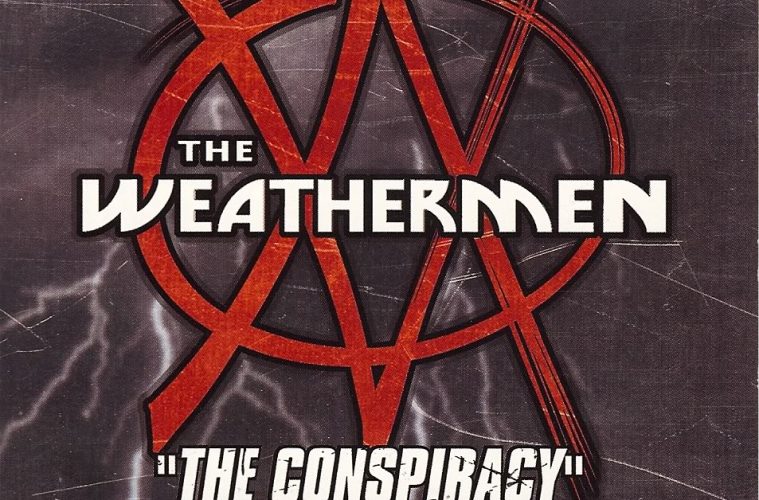 The Weathermen :: The Conspiracy

Now there’s a supergroup if there ever was one. Tame One, Breeze Brewin, El-P, Cage, Copywrite, Vast Aire, Jakki Tha Mota Mouth, Camu Tao and Yak Ballz make up The Weathermen. Many of them (through crews such as Juggaknots, Company Flow, Artifacts and MHz, or, in the case of Cage, on the solo tip) have been frontrunners for the ever-growing underground movement that has now reached a level of exposure it’s hard to still tag it with the u-word. It is no coincidence that the majority of these rappers are also signed to (or, in the case of El-P, owner of) two of the most popular labels in independent hip-hop, Eastern Conference and Definitive Jux. Columbus’ Megahertz crew even splits along this very line. Producer Rjd2 and rapper/producer Camu Tao (as part of SA Smash) are signed to El-P’s label, Copywrite is down with The High & Mighty’s Eastern Conference.

Conceived by Cage in 1999, The Weathermen have only a handful of official collaborations billed to their name (on “Eastern Conference All Stars III” and “Definitive Jux Presents II”, for instance), but there has been plenty of guest-starring among individual members. With this professionally edited mix CD the crew is finally gearing up for a proper album release, scheduled to follow shortly. Due to other obligations, not everyone had the same amount of input into “The Conspiracy” (El-P and Vast Aire have each only one verse), while formerly earmarked members like Masai Bey, Mr. Eon and Tage Proto don’t appear at all.

The mix CD starts with a bang, when, after a solid intro, Copy, Yak and Cage play Jada, Luda and Nas over the “Made You Look” beat. Dubbed “Made You Shit Your Pants”, this is the first of 9 cuts on “The Conspiracy” that exploit the current jacking-for-beats trend that was popularized by 50 Cent with his many mixtape appearances. From the jump Copy drops the heavy load:

“My next album’s gonna come with lotion, homeskillet
you go fuck yourself if you don’t feel it
All it took was liquor, marijuana, six strippers in a sauna
pen and pad, now I got a buzz quicker than Nirvana
First you non-violent, now you in your verse wildin’
your only criminal record’s BDP’s first album”

What separates joints like these from spitting writtens or freestyling over someone else’s beat is that they often are a take on the original. Usually, the hook gets amended, and flows get appropriated. Of the above-mentioned cast, Yak does a nice impression of Ludacris (it won’t remain his only one) and with a song title like “Made You Shit Your Pants” you know the hook’s going to allude to the original. But you haven’t fully grasped the potential of this gimmick until you hear El-P mimic Missy’s convulsions on the not at all inappropriately titled “Missy Done Justice”. Delivered over the “Gossip Folks” beat, his harsh words are indeed doing Missy strangely justice. It’s hard to top something like that. Jakki, Copy and Tame give it a try, spitting over Erick Sermon’s “React”, dubbing their effort “React Shun”, but only Jakki’s misogynist musings are really in tune with the hook: “Whatever she said, probably none of it fact / cause most chickenheads be runnin’ they yap.”

Further jack moves include Jakki and Copywrite over 50’s “Back Down” (“Columbus”), Yak and Camu over Trina’s “BR Right” (“Where I Wanna Be”), the MHz crew over a Megahertz track (“Mhz Over Megahertz”), and Brewin, Tame and Cage over Ghostface’s “Fish” (“Fried Fish”). For “What Happen To That Toy” (based on, you guessed it, Baby’s “What Happened to That Boy”), Cage and Tame resurrecct an ancient hip-hop term (‘toy’), which is always appreciated around these parts. Yet the one that will probably be most talked about is Cage’s “Beverly Crabs”, and it won’t be because of the “Dead Wrong” beat. On this follow-up to “Haterama”, he responds to 7L & Esoteric’s “Do It” single:

“You need a firehose to get that shit offa the shelves
Left a crumpled up rap trail, lost in my twelves
Wishin’ death on me, soundin’ like my ex-hoes
Wasted verses on haters, me and Copy collect those
Get milk to sponsor the Where Has He Been? Tour
Came to the rap mecca and had to cancel every in-store”

With Cage, Copywrite, Tame One and Camu Tao doing the majority of the verses, battling and bragging are the order of the day. There are moments when you feel like Tame’s dissing of rappers who are “sponsored by Punchliners Anonymous” falls back on The Weathermen, as “The Conspiracy” increasingly starts to sound like a meeting of Punchliners Anonymous. But since this is only a pre-album teaser, nobody expects new grounds to be broken. Wordplay has long enough been neglected by rappers, let’s cherish that fact that there’s a crew about to storm into the spotlight that define their very existence as rappers through wordplay.

For those who turn their noses up at so-called mainstream beats, “The Conspiracy” features 6 exclusive tracks, plus the Rjd2 remix of “5 Left in the Clip”. Tame One’s “Slick Talkin” gets updated with a guest spot for Breezly Brewin, Yak prepares for a possible full-length with the boisterous “Volume”, SA Smash bring attention to their debut LP “Smashy Trashy” with “Gangster”, Copywrite continues to polish up his delivery on “10 Times”, The Nighthawks present a nice non-album cut (“Come to Daddy”), Vast Aire and Camu Tao marvel at their fame (“Chris Lighty”), Tame One sets a possible world record for the most pop culture references over the classical background of “Concerto”, and finally (taking a clue from Aceyalone) Copywrite, Cage and Yak leave us with the simple message of “Every Rapper in the House Shut the Fuck Up”.

After this appetizer, the true test for The Weathermen still lays ahead. They will have to prove that they’re more than an excuse to put out more product, that they’re not dominated by Cage and Copywrite, that talent like Breeze and Jakki won’t waste away, that there’s room for less compatible MC’s like El-P and Vast Aire, and that the slightly differing profiles of Eastern Conference and Definitive Jux can actually be attuned as well as it now seems.