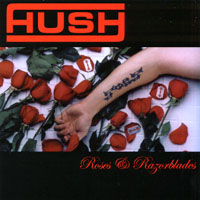 Detroit has been made recognizable as a legitimate hip hop farmland seemingly on the name of one boisterous Caucasian emcee. Since then, the floodgates have opened for many of Detroit’s most lyrically inclined residents to try and make a name for themselves. MC Hush is another Rock City rapper/producer, trying to make his mark on the industry with his album “Roses and Razorblades.” An adept performer on both sides of the spectrum, this album is a testament to his potential, but also stands as a blueprint of imperfections for him to modify on his subsequent efforts.

The opening track is “Get Down”, an ode to both Hush’s lyrical prowess and his street mentality. “If you ever hear my sound in the street, it goes BLAOW! Get down,” goes the prosaic chorus. It is however, an appropriate opener for an album filled predominantly with gritty lyrics and banging beats. The next track is the impressive collaboration with fellow Detroit representative Royce Da 5’9″entitled “Knuckle Up.” Over the course of these 2 tracks (and for the rest of the album), Hush displays a good use of wordplay and cadence in his rhymes. Unfortunately, you can’t build a strong album on a foundation consisting of only those two qualities, and a lot of the album tries to do just that. There are a few bright spots though, which show some of the star potential that MC Hush possesses.

“Detroit Players” is without a doubt the most infectious track on the album. An ultra-funky beat courtesy of guest emcee Cadillac Dale, combined with overtly simple rhymes make for a very refreshing listening experience. Forget the tiresome subject matter, the lyrics are delivered with so much flare that you’ll look past the fact that there is little substance to the verses, and just vibe with the song. Note to all artists making songs about the clichÃ© topics of rap: Your songs should rival this one in terms of emcee caliber, production quality, and pure enjoyment in order to be deemed dope. This track is definitely a standout cut.

Easily the best track on this album is the superb title track “Roses and Razorblades.” Deviating from the themes prevalent throughout the first 10 tracks, Hush adds another dimension to his arsenal, balancing the album by showing his more artistic side. The beat produced dually by BMX and Hush is a moving concoction; the live instrumentation creating a somber, climatic mood for an introspective Hush to ponder this enigmatic existence we call life:

“I’m a simple man all I want is lifes gold
But I never wanna leave, not until my life’s told
Through a pen and a pad I write ministries
Frustration with these suicidal tendencies
I can’t blink cause if I do it might pass by
Just leaving me, once again I only ask why?
I’m waking up in the morning just to fight work
Trying to figure out where I fit in this tight world
I’m living proof you can hustle for your life’s gold
Struggle with the muscle of a knife in your minds soul
I never thought I could express what the real was
Till I understood what the phrase ‘keep it real’ was
Does it mean loyalty or does it mean hate?
Cause most of y’all do the latter just to instigate
I don’t really care cause I be own man ’til the night’s out
Fighting in the blind till the lights out”

“Roses and Razorblades” works so well because of the accessibility of the emotions to the everyday person. Conversely, the narrative Hush describes as “the most personal song he’s ever wrote” in the liner notes falls flat on the performance level. This track is more of an open vent that rhymes than a well-narrated song. The passion poured into this song is admirable though, from the personal lyrics to the fervent verbalization, he even has his mom making a cameo appearance doing the standoff skits. But as a song it lacks the creativity and cohesiveness that make most effective, enjoyable narratives usually such great listening experiences.

A large problem with this album is the amount of filler, and not in terms of songs either. A lot of the rhymes are lackadaisical, and should’ve been written more carefully. For every “So you rappers go ahead and get your bling bling on/With no fans at your show saying: Is this thing on,” There is a “When I know my CD is the bomb it’s insane.” Many of the songs feel incomplete, sloppily composed and rushed. Aside from this, and the solid if not unspectacular beats, this album is very good. But a large part of making a good rap record is the ability to write meaningful or highly entertaining lyrics, and Hush just seemed to settle for average on this album.

There is no mistaking that MC Hush is a talented emcee. He has a passionate delivery infused with a genuine love for hip hop, and has shown that he can hold his own producing banging tracks and writing dope songs. But when an artist has the qualities it takes to be successful, you can’t help but be disappointed that he isn’t able to construct something more solid then what this album has to offer. That’s not to say this is necessarily a bad album. There are a few really dope songs and most of the rest is all decent. But the quality of the album is plagued by problems that could be easily fixed, had he had a little more time to tighten the screws. This is an album that shows promise for Hush, but also contains flaws that need to be addressed if Hush is to take his game to the next level. If you like street sounding music combined with braggadocios and hard lyrics, you will probably enjoy this album. I’m going to be listening to it every now and then, in hopes that I’ll be hearing another album from MC Hush that lives up to his potential.