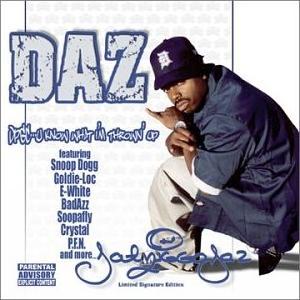 Lemme holla atcha playa. Daz may not be on TV Monday nights, but clearly he’s ready to start “thuggin and buggin” on his competition in hip-hop, and why not? Throughout his career he’s been getting jerked more than chicken. They dismissed his beats on Death Row as being second to Dre. They dismissed his rhymes in Tha Dogg Pound as being second to Kurupt. They dismissed DPG Recordz as merely an attempt to piss off Suge Knight. In the underground though, Daz kept rolling despite the critics and the haters. Albums like “R.A.W.” may not have been widely distributed, but their cult status among fans of West coast hip-hop is hard to ignore.

In 2003, Daz is clearly still fed up, but now he’s ready to take it to the next level. Having concluded that former partner-in-rhyme Kurupt is a punk for re-aligning himself with Suge and the row, he’s broken solo for good and come extra heavy with “DPGC: U Know What I’m Throwin’ Up.” That would be noteworthy in itself, but it’s extra gravy that for the price of one disc Daz threw in a bonus DVD with his “Dogg Catcha” video for a fat middle finger to any cable channels that won’t air it. Hold up, raise up, it gets even bigger than that – Big Snoop Dogg is all over this 31 track long album, hollering for his lil’ cousin and pouring extra fuel on the Death Row fire. If you couldn’t see it burning, listen to “U Ain’t Shit” and you’ll feel the flames:

“It’s a new time and a new day, a new way and a new era
A new mind a new nine, I had to cock back and spray
Lay ya down for that title and crown
And that’s why we X’ed your bitch ass from the pound
(Kurupt, Kurupt) Switch sides like that
Cuz, we can’t fuck with no niggaz like that (sucka)
And that what I call a bitch
I second that emotion he was dropped from the click
Better start your own gang, better watch where you hang
Real G’s do real thangs
Hang out of the window blow out your motherfuckin brains
And let you know about this Long Beach Gang
Motherfucker I’m a Death Row Killa, Suge Knight can die too
Kurupt Dumb Gotti, It’s on when we find you
Transformin niggaz don’t deserve to breathe
How many niggaz down to ride with me (yay yay!)”

Hard feelings are good, but hard beats are better. Soopafly’s production here has plenty of twonk for the trunk, as does his beat on the aforementioned “Dogg Catcha,” which busts “Atomic Dog” in a way fans of Death Row should already be familiar with. The aggressive spitting of Daz on the track will take heads back to the days when “The Chronic” set the stage for a whole era of G-Funk to come:

“Now drop, to yo’ knees
And picture me diggity Daz – flowin through the breeze
My style stretch from miles from miles, check my files
Ten years in the game I’ve been puttin it down
I loc with the finest, you love the way that I’m rhymin
I time it with precision, and you know I be grindin
Cause I’m a Dogg House Dogg Pound chittey chow pow pow
Y’all know how we do it, you know we put it down
Yea, they lovin these hits for years
When the smoke clears, Diggy Daz appears
I’m here for whatever never the less I got the remedy
to get the party pure energy before the next century
Swoopin down the block in the drop-top
I kept comin with hit rocks, and it don’t stop”

y It’s still surprising that Kurupt has been getting the props all these years while Daz gets no love. He may not hang with Canibus and Ras Kass, but he also hasn’t penned any “you more of a bitch than a bitch” rhymes like Young Gotti has. The key to Daz is consistancy. Consistancy in his flow, consistancy in his gangsta style, consisitancy in what he hollers about and who he’s hollering to. Within that consistancy is an unrecognized complexity, where he can spit as hard and fast as Twista, or as smooth and pimpish as his big cousin Snoop. The D-oh-Double-Gizzle does more than provide skits between songs though – he throws up his DPGC and gets straight down to rhyme on songs like “It’s Dat Gangsta Shit”:

“It’s the mythological chronicle diabolical
psychological make a model hoe fuck a G
Polish ya, demolish ya, turn ya all into particles
Shade tree niggaz in the game, I lose ’em like follicles
But that goes empathatical, that-a-goes into articles
Read by prodigals, and I heard that I shot a few
But that’s what you gotta do when you livin so radical
From me to you my nigga {*BLAM*} never yap without your gat, fool!”

It should serve as fair warning to the listener that this is one of the longest albums that’s been released all year long – nearly 80 minutes on the CD disc enclosed. As a result you’ll eventually want to skip over the interludes and skits (which occur almost every other song) and blaze past a few of the less inspired beats and rhymes, such as “Skirt Out.” In fact, making “skirt” tire noises in your songs these days is about as cute as calling yourself the Birdman and making bird calls in every track you appear on, but I digress. “Deez Niggaz Trippin'” has plenty of bass but that’s about it, and the same goes for “Who Dem Niggaz” featuring P.F.N.; and the irony of the title as pertains to the latter won’t be lost on the listener.

On the flipside though, the album is packed with a lot of can’t miss songs for anybody who considers themselves fans of Tha Dogg Pound or the G-Funk sound. “All Night Long” is a Mike Smoove hit of Cali funk shit, as is “Can’t Stop That Gangsta Shit” – a Soopafly cut that in Daz own words will make you want to “dip skip the switch [..] hydraulic lift up the front and [..] drag the back.” Noteworthy is the “Introduction 2 Mayhem” featuring Soopafly, whose title accurately describes his hard track and lyrical thuggery. He does equally good work on the music for “Round N Round We Go,” a track so high octane in presentation and flow it’ll take you straight back to “Dogg Food” circa 1995. Fredwreck’s work on “Ain’t Nothin’ But a Gangsta Party 2” make it a worthy sequel to the original despite Tupac’s absence. He also laces the title track and the song “World So Cold.”

At some point though, you might wonder why Daz seems to have done almost no production on this album save for “A Message to Ricardo Brown.” Perhaps by playing the background on the board though, it gave Daz more time to work on his rhymes and his flow. It seems to have worked, since he hasn’t sounded this fired up since Snoop told him to “step up on that ass, and give these motherfuckers a blast from the past.” While he’ll never be accused of being a social commentator or a ghetto narrator, why should he be? What you expect from Daz on the mic is what you get – a lot of shit talking, a do or die attitude, and a willingness to throw caution to the wind whether it comes to partying or riding. Taken strictly at face value “DPGC: U Know What I’m Throwin’ Up” is his best solo album to date, lyrically and musically. If he’d cut back on the number of skits, produce a few of the songs himself, and get the obligatory guest like Redman or Nas on a track, the next album could straight murder the music business, or Suge himself – whichever he reaches first. Keep an eye open for Diggity Daz Dillinger, DPGC.