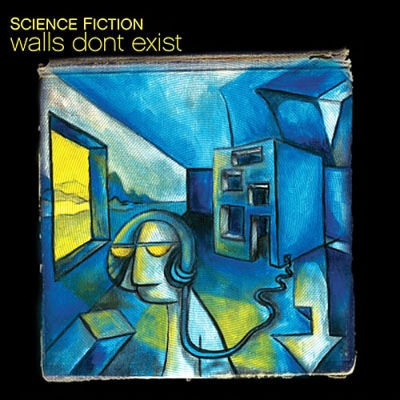 However, it’s most evident that hip-hop is embracing silence by the pure number of new â€“ and relatively successful â€“ b-boy instrumental albums being released over the past year or so. DJ Shadow’s “Private Press” sold well considering its strangeness, Premier-esque Profuse 73 came up with two great LPs, “Uproot Studies and Uprock Narratives” and “One-Word Extinguisher,” and The Avalanches, with “Since I Left You,” were called the next by thing by everyone from SPIN to URB. Science Fiction’s “Walls Don’t Exist” fits well among this group, though it doesn’t quite have the bite that its competitors have. It’s not entirely the fault of Sci Fi: Like the third Terminator verses the second, the latest addition pales in comparison just because we’ve seen it all before.

That’s not to say that “Walls Don’t Exist” does not have some crazy beautiful moments. One could guess the title of the song “Carousel” just by the bassline and shifting sounds, making the listener feel like they are going up and down and around. Another shining star is “Hold On,” one of my favorites partially because it flips the juicy bassline from The Beatnuts’ “Props Over Here” and turns it into a Les Nubians song. Even more encouraging is one of the first cuts, “…Ever After,” a scary stalker narrative hosted by a Jim Morrison-sounding motherfucker.

However, the album highlight would have to be “Losing You Is What Drowning Feels Like,” in which the beat shifts and wiggles faster than Shakira on top. It’s a risky cut that could have easily been a disaster. Ironically, that’s the one problem with Science Fiction. It sounds too damn clean. “Je Reve de Vous, Et Je Me Reveille en Pleurs” is like DJ Shadow avoiding complex structures â€“ in other words, boring. And “This Is Where I Landed When I Fell For You” and “I Sat By The Phone At Nights And Waited For My Dreams To Call” are so mellow, it’s apt to put someone to sleep.

There are a handful of great cuts on this 17-track LP, but I can’t help but think what an essential EP this could have been. Or how incredible things would be if Science Fiction went beyond those musical walls that don’t exist. And furthermore, how I could grab any of their competitors’ two-year old CD’s and get my mind-blown all over again. “Walls Don’t Exist” makes an excellent stop-gap between now and the next Avalanches/DJ Shadow/Profuse 73 albums. Just don’t expect brilliance until the next Science Fiction album.