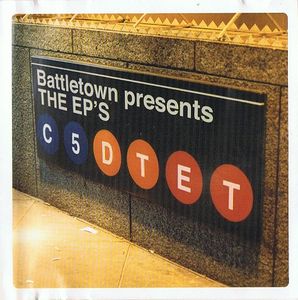 We all know EPs. They’re typically anywhere from five to ten tracks sampling an artist’s skills, oftentimes a teaser for a full album which is to come sometime in the future. Unfortunately, shelling out $10 for five songs isn’t always the nicest way to treat your pocketbook, regardless of the artist or the hype surrounding the release. Battletown (an Australian based record company), thankfully, has found a way around this problem: package EPs from their three premier artists on to one CD. CL5’s “Comewhatmay EP”, Detect’s “Dropzone EP”, Ethic’s “Ethic is Anguish EP”, and seven extra Mp3 tracks from the Battletown crew fill this CD with 96 minutes worth of hip-hop. Due to the obvious partitions here, I will continue by examining each EP on an individual basis.

CL5 is Bizzan, who handles most of the production, and Digga on the vocals. The first thing to be noted is Digga’s commanding presence on the mic. His voice is clear, consistent, and able to manipulate to fit the beat, areas of strength the EP does a very good job of exploiting. The “Comewhatmay EP” begins with “OTB”, a steady moving track with wonderfully beautiful string melodies which balance out with Digga’s mid-toned voice for a truly exquisite product. From here, it the tempo and upbeat-ness of tracks slowly dwindles, giving Digga ample opportunity to display his versatility. Also, on most tracks, Digga’s lyrics intelligent, thought-provoking, while remaining entertaining. On “Manifesto”, which is set to a dark piano loop, he uses the whole song to document the life of an average person, making clear his views on the “play by the rules” society we live in. Check the questions he poses to those nearing their last days:

“About this time, maybe it’s time to make a will
Organize the funeral and a home for when you’re over the hill
And yet still, maybe about this time you start to think
“What if my life was over suddenly in just a blink?
What did this all mean and whom did I really serve?
What was the point now that it’s just a downward curve?”
So for everyone, the same insole, on and on it goes
9 of 10 are guaranteed to live a life they never chose
With the opportunity, you’d never buy into a system
That equates to spending one’s life within a prison
Just think it’s human, with a multitude of gifts
You’re designed to spend the best years of your life working for it
Don’t be deceived, for soon there’s no reprieve
And then there’s no tomorrow for those that won’t believe”

The next EP is Detect’s “Dropzone”. I felt this was the weakest of the three EPs for various reasons. Detect has a distinct, nasally, slightly whispery voice that rarely works to his advantage and his flow seems unnatural and uninspired. Also, the production (which was handled almost exclusively by Detect himself) on the entire EP was poor. Most of the tracks were very repetitive and unoriginal. Other than this, nothing is easy to simply pin-point out as negatives, but it is clear that they aren’t worth more than a few listens. Detect’s lyrics also come out as sub-par most times, especially when compared to CL5 and Ethic. Check “Freedom”:

“Taking comfort in this isolation, composing my creations
Ensures no deviation
Affiliations I belong to fade and black out
Concentrate on what I wanna make and put them tracks out
That’s my purpose, far from worthless
Don’t care if anybody heard it
As absurd it may seem to you until I earned it
I don’t wanna try and succeeded
Just get high and spark my weed indeed
I breathe on these leaves and freeze
Listen to my shit on repeat until I’m pleased”

The third and final EP is Ethic’s “Ethic is Anguish”. Though only five tracks, this EP is by far the best of the three in many aspects. Surprisingly and in spite of each track being produced by a different individual, the EP has a strong unity, each song portraying different aspects of Ethic’s rapping skills. Ethic starts by showing off right away, beginning with a quickly paced, xylophone filled “Launch Into” where Ethic asks us to “Step into the world that Ethic creates/Step out of the stereotype, let’s elevate this”. The next track, “Nothing New”, Ethic becomes very introspective. Throughout the verses he discusses himself from a very personal perspective. Then as the chorus beings he relates all he has said back to the listener:

“This is just some things on my mind
A place I’ve come to that’s hard to define
But I would like to invite you
To take a break and experience what you might do
If, once in a while, we looked eye to eye
Neither of us spoke, but we both tried
To stare past the looking glass surface
And educate our self through another person”

Just as every song on this EP, there’s no doubt he’s singing from his heart with each word. The lyrics are so powerful that you’ll find yourself rewinding, listening closer, and undoubtedly leaving yourself easily relating to the emotions he’s explaining. This EP ends with “Anguish”, blowing all other tracks out of the water. As the guitar melody kicks in with a simplistic percussion beat, Ethic raps as Katie Partridge sings the chorus for a truly beautiful effect:

“I’ll cave in probably before I’ll prevail
I’ll excel pass places others promised to fail
Success is subjective and dismantles the collective
As remedies erase duality
Dueling, ruining my blissful ignorance
Refueling my renaissance
I’m lost seeking to be found, listening for sound
Wearing this crown faÃ§ade proudly
The proud be plaguing my insecurities
As I nervously ask you to murder me
It’s sure to be an identity resurrection
With childhood memories I keep on forgetting
And this continued condition’s proving contagious
As I am Ethic and Ethic has become anguish
[…]
Have you ever felt this way?
Or am I the only one?
Anguish has taken a place in my heart
And all I can do is run away”

The plus is, upon sticking this CD in your computer, there’s seven more Mp3 songs to enjoy from these and other members of the Battletown crew. What is important to remember is that, though there are many songs on this CD, it is still just a collection of EPs. I suggest waiting for the full length albums of these artists to be released. That said, this is a nice collection with some impressive tracks, especially coming via Ethic and CL5. Judging this album as a collective is slightly unfair to each one of the artists (just as it is on any collaboration/mix tape record), but it is a packaged deal. Keep in mind that these ratings reflect the whole album and not each artist on the whole, but the explanations of each EP previously given should give you an idea of this album’s strengths and weaknesses.