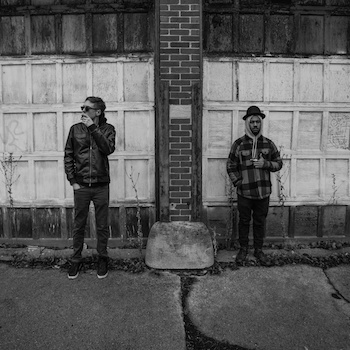 L’Orange & Jeremiah Jae :: The Night Took Us in Like Family

L’Orange is one of those kind of producers you like from the first time you hear him right up to his most recent work. He doesn’t just compose beats or loop sounds – he creates audio landscapes out of multiple layers of different sounds, samples and instruments. His closest contemporary would be a beat maestro like Madlib, who seems to improve every rapper he works with. He doesn’t so much give them the beats to their rhymes – he challenges them to rhyme over his beats – stepping their flow up to match his unbridled creativity.

Jeremiah Jae would be the latest to benefit from L’Orange’s gift, and by extension we get to benefit from that gift as well on “The Night Took Us In Like Family,” where we get to enjoy another gift in the form of Gift of Gab – who makes one of his patented scene stealing lyrical cameos over L’Orange’s bouncing beats on “All I Need.”

It’s one of only two cameos on the entire album – the other comes from Homeboy Sandman on the lush and beautiful “Ignore the Man to Your Right,” where Sandman aptly fits the title of the album by rapping “I will not be serving any sentences/there aren’t any photos/I move at night there’s not even photosynthesis/I don’t belong in a cage/They’ll never take me alive, and I’ma die of old age.” It’s one of those songs that’s hard to do justice in words, but I’m forced to try, so I have to say that listening to this one on a high quality stereo or a strong pair of headphones is key. The way the background vocals jump in and out at you, swelling to tidal wave heights and receding quicker than a beachfront before a tsunami is a powerfully intense experience.

What can one say of Jeremiah Jae though? Well it’s clear L’Orange sees big potential in him to send the production he’s capable of Jae’s way. As such I’ve spent most of my time listening to and RELISTENING to “The Night Took Us In Like Family” trying to find it. The Chicago born, L.A. influenced Jae has a musical pedigree to be sure, growing up the song of Miles Davis’ touring jazz musician Robert Irving III, but there’s not anything jazzy about his delivery. He sounds like a cross between Guru andCormega without displaying any of the charisma of either. There’s a joke hidden in that explanation that I hope you get – if not just listen to “I Was Invisible Nothing.”

On a technical level everything about the song is right – well chosen piano chords, a solid bass and drum thump to keep you head nodding, an atmospheric and moody chorus, mixed nicely with vocals delivered on time. There’s nothing off about Jae’s words themselves on tracks like this or “Ice Obsidian.”

“This ice imperial shining brighter than ariels
Icy hot for your stereo, cold heat in the barrels
Black Obsidian, blacker than hills meridian
Mission given like Gideon, squad thicker than Indians
Carried a torch like mobs pitchin a fork
This guy puttin in work, these bars written in dirt
You thinkin it’s from the Earth
I’m shovelin pots and bubblin
Heart of a thug, hustlin
Dope, I’m a product of”

Here’s the conundrum I’m left with though, which I know will strike any of you who listen to Jeremiah Jae over long periods of time – he’s just too damn flat in his delivery. It’s like he’s rhyming on methadone, and that may be a conscious style choice, but the lack of enthusiasm betrays the interesting audio picture that L’Orange is trying to paint for him. Neither great beats nor great rhymes should exist in a vacuum, and as much as I enjoy songs like “The Concrete Some Call Home” and “Death Valley” it’s almost in spite of Jae rather than because of him. It’s not Jae’s verbiage, it’s his not his flow, it’s that he seems completely oblivious to whether or not he’s saying his well written words in an entertaining way. The potential is there, but if I give this album a high recommendation, it’s because of L’Orange’s gifted music.