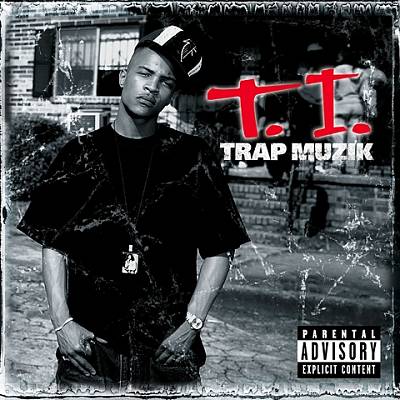 T.I.’s 2001 debut “I’m Serious” had all the hallmarks of a runaway hit – a track by the Neptunes (“What’s Yo Name?”), guest appearances by Too $hort and Jazze Pha (“Hotel” and “Chooz U”) and on top of all that, the title track featured reggae chatta king Beenie Man. Unfortunately for the Atlanta representer, Arista Records seemed to have no idea what to do with him or how to promote his music. Despite being signed to a major, “I’m Serious” was for many an underground rap favorite.

Moving to Atlantic Records seems to have breathed new life into T.I.’s young career. He also has good timing in his subject matter. Coincidental or otherwise, his hit single “24’s” from the new album “Trap Muzik” comes at what may be the peak of a national trend to glorify bigger and better dubs (rims) on the tires of big cars. While a lot of the songs to date cover the subject well, T.I.’s DJ Toomp produced track has an infectious beat and a good spin (pun intended) on the topic:

“454 SS, I race Porsches
White leather seats, as fresh as Air Forces
I say I’m doin bout a hundred but the track still bumpin
Number 8 on N.W.A., +Straight Outta Compton+ (‘Dopeman’ nigga!)
Pull up at your apartment sittin on 20 somethins
And the dope boys hollerin ‘Ay what’s hap’nin?’ The kid runnin in
The clicks start dancin and the broads start choosin
And the cars been parked but the rims a keep movin
[…]
If your rear view shakin and your seats vibratin
24 inch Daytons got the Chevrolet skatin”

Drawing strength from the deep and repetitive bassline, T.I. uses his country-fried voice to musically punctuate his flow. While some rappers don’t bother to give any inflection or shift in vocal pitch to their words, T.I. seems to come from the E-40 school that the more you throw it, the better the shit gets. As such T.I. doesn’t need to rely on hitting punchlines or putting big words in his rhymes, which also gives his rap a natural and totally unforced quality. When he raps over David Banner’s track on “Rubber Band Man,” the effervescence of the Dirty South bubbles to the top:

“Call me Trouble Man, always in trouble man
I’m worth a couple hundred grand, Chevy’s all colors man
A rubber band man, like a one-man band
Treat these niggaz like the Apollo, and I’m the Sandman
Tote a hundred grand, cannon in the waistband
Lookin for a sweet lick, well this is the wrong place man
Seven time felon, ay what I care about a case man?
I’m campaignin to bury the hate, so say your grace man
Ay I don’t talk behind a nigga back, I say it in his face
I’m a thoroughbred nigga, I don’t fake and I don’t hate”

On his latest album, T.I. keeps the guest appearances to a surprising minimum. The only track with any big names other than his own is “Bezzle” featuring Eightball & MJG and Bun B of UGK. Over another funky DJ Toomp beat, T.I. states clearly that their choice was not accidental or a cross-promotional gimmick – he’s giving love back to his favorites:

“I came up bumpin Eazy-E, Cube and Dre
Eightball, MJ, UGK
Hey, they raised me like Sonny raised C
I always make the money, money never made me
Break me, what dizzy bitches you cra-zy?
You seen me with a freak don’t think she never paid me
Pimpin get a bit, break a bit, hit a bitch, shake a bitch
Spit game ’til I make that bit, turnin tricks to get me rich”

It’s not particularly shocking that some of ths above material is misogynistic, something that rap fans from ALL COASTS are probably used to by now. As Too $hort says though, “If you aren’t a bitch you probably weren’t offended” and while I don’t endorse the hustle, I’m not here to player hate on it either. Back to T.I.’s album – even when you leave the lyrics alone, the beats often time bring you in and force you to take notice. The funk and deep piano chords of Toomp’s “Be Easy” show why his work is a continual favorite on this LP and why this song is a natural for the next single. San Holmes’ “No More Talk” is a radical departure from the relaxed atmosphere – it’s a tense and moody track who’s arrangment and sound effects make T.I.’s narrative that much more effective. Kanye West’s “Doin’ My Job” may be the oddest of all though – you might just mistake T.I. for a member of Roc-A-Fella Records, and you’d be glad to given this song is smooth as hell. In fact, do a remix with Beanie Sigel and Jay-Z and let’s bring this thang from the East to the South and back again. And last but certainly not least, I’d be remiss if I didn’t mention Jazze Pha’s pimptastic work on “Let’s Get Away,” which may be the ode to your next sexual escapade for men seeking fly-ass freaks and women looking for a ballin’-ass player.

From the self-titled “Trap Muzik” intro to the “Long Live Da Game” closer, T.I. lives up to the potential he had on “I’m Serious” but was never seriously given a chance to show the world. With a good flow, a pleasntly mellifluous voice, and some of the South’s best beats backing him up, this album is perfectly timed for the end of summer. At a party, in your headphones, or booming out the booming out the booming out the jeep, “Trap Muzik” will show your good taste in Southern rap flavors. If it’s not your style, this may be the place for you to get into the groove and see how it moves. Take it from me.