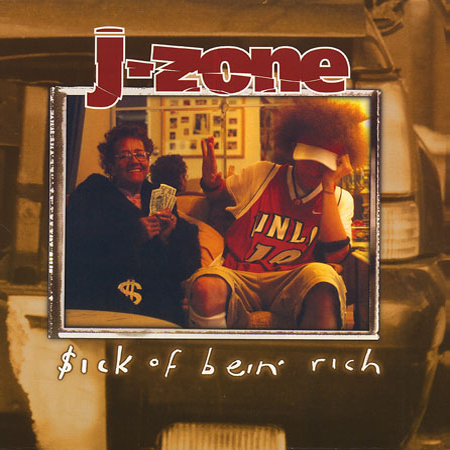 J-Zone’s something of a legend at RapReviews.com. In the first ever “Year in Review” article on the website, his debut EP “A Bottle of Whup-Ass” finished #3. In 2002 his “Pimps Don’t Pay Taxes” was belatedly reviewed by Matt Jost and got an equally high score. In his own words, “If there is such a thing as a blueprint for good ol’ hip-hop music, it comes to life on this record.”

In 2003, J-Zone has decided to do it one more time. Although he has admitted he belongs behind the boards making beats – and his are some of the best in all of hip-hop – he is the reluctant star of his label like Baby from Cash Money. Actually, neither one is that reluctant, but Baby is not exactly known for his dopeness like Zone is (and watch the hatemail start flooding my inbox now). Zone’s best asset is that he’s relentlessly funny. He’s been known to drop songs about masturbating to Lucy Liu films, being tricked into sex by underage teens, and cashing other people’s welfare checks. Of course anybody can be self-deprecating or hilariously over the top, but few do it with Zone’s relish (and again, his beats).

So now in 2003, Zone is so successful as an entrepeneur/dope rapper that he’s “Sick of Bein’ Rich.” Nah, not really. That’s more humor from the man who admits he drives “A PIECE OF SHIT” on the song “5-Star Hooptie”:

“Cause cats get on MTV Cribs and floss
But everytime I hit a bump my shit cuts off
And my broad run her mouth when she ride with a brother
Cause I drowned out Usher with the sound of the muffler
Last week I kicked the bitch out for laughin and stuff
But she looked so cold (brrr) when she was catchin the bus
Soda stains on the seats, no cushions
No pun intended, ridin with me is a pain in the ass
But when I make a left turn, stick my hand out the window
The signal is broke, hood lettin off smoke
They say a fly-ass ride, pulls a chick a day
But the only ones I know work at Triple A […]
Keep laughin at my car, you’se a goner
My ride specialize in vehicular homicides like Frogger!”

It’s an instant J-Zone classic. Pounding drums and a simple sample keep it gully as hell, interrupted by the occasional pimptastic horn break. Zone is also bringing in big-name guests to do work on this LP, and you’ll catch a verse from Masta Ace on the song “Gimme, Gimme, Gimme”:

“Fat chance, you look real good in them black pants
I love your baggy stance that’s why I sat in a trance
But I know first hand, that y’all hoes are lethal
Your souls are transparent, and your clothes are see-through
Don’t know me from a hole in the wall, but wanna go to the mall
And shopping bags, I’m left holding ’em all?
I know you and your baby daddy is goin through it
But like the Belt Parkway bitch, I can’t-do-it/con-du-it”

And on “Choir Practice” you’ll get Likwidated with rhymes from J-Ro and King T:

“The sound you’re hearing’s all brand new
Intervening, what’s the meaning?
California quakes through your region
Whoever’s disbelievin, fool, trace these steps
J-Zone and King T (RIGHT ON) we’s vets
It’s goin down, the word all around Comp-town
I’m connected with that underground sound
So watch me just clown, tryin to buy this 10 acre ranch
Tired of buyin food with these stamps”

And of course, a J-Zone album is always known for skits that are actually worth listening to, just for laughs. On “Grandma” Zone gets berated for parking his car on the grass (or is it a driveway?), advertises for a new Old Maid product called “Bitch-B-Gone” (available in powder or a spray can), and on “Le Chateau Blanc” he turns White Castle into haute couteure. The laughs never really stop coming, right from the intro track “The Internship” where some straight Monica Lewinsky action is going down, Zone style.

On the whole, Zone fans are going to need to cop “Sick of Bein’ Rich” for the collection. Newcomers however may want to check either of the two aforementioned releases. Although Zone is still dope as fuck on songs like “Prima Donna” with Copywrite and nasty as ever on songs like “Ho Kung Fu” (featuring a girl who looks like Lucy Liu’s twin), the result on the whole sounds slightly overextended after 53 minutes. Zone’s been carrying the weight for so long, he doesn’t get to concentrate full time on either his beats or his rhymes. Maybe more guest appearances would help, but don’t misunderstand what I’m saying here – a J-Zone album is still funnier and fresher than 95% of the indie label shit you can cop (or as he wryly notes download for free) hands down period. It’s just not as astounding as when he first broke on the scene, but still worth that green all the same.