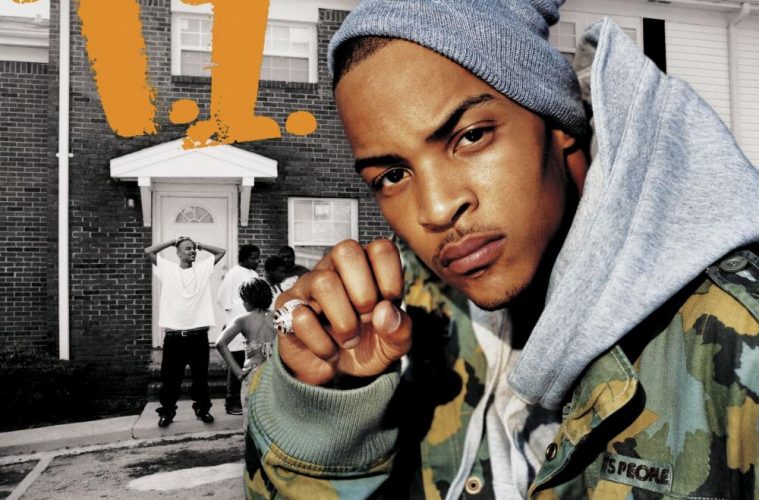 Here’s a million dollars. Go out and blitz radio, video, and print. Get T.I.’s records up in the mix, get him an interview in The Source, and get him a street team to put up stickers and posters in every major city in the country. OR… record one song with Young Buck, get unceremoniously kicked off the song before the album is even released, and reveal it’s due to your long-standing feud with Ludacris. You can get a lot of buzz either way, but Atlantic Records ought to hand T.I. a nice bonus check for all the money they saved him on promotions. Here’s the funny part about the whole thing – his removal from Young Buck’s “Stomp” was LITERALLY so last minute that the CD jackets had already been printed with his name on it. G-Unit/Interscope was forced to print and affix a correction sticker to every copy sold the week “Straight Outta Ca$hville” was released just to state he WASN’T on it. What did T.I. say about Luda? Here’s a taste from the bootleg:

“Ay 100 carats on my chest I’m so true to this
Task force got my vest I got a new one bitch
Feds hate and talk shit but I’m too legit
A million dollars at a time – till I’m super rich
Pimp squad, G-Unit – fuck who you get
Ask ya nieces and ya nephews who the shit
Real niggaz see the difference ‘tween you and this
Me getting beat down that’s LUDACRIS“

Hip-Hop historians will make note of the fact that like Canibus and LL Cool J before them, the offending verse was removed EVEN though Luda’s response was left in the song and ends strongly with the line “So please stay off the T.I.P. of my dick!” Of course there’s some dispute about who made who do what. Luda’s side claims T.I. wouldn’t clear his verse for Young Buck’s album when he heard Luda say “your beef ain’t legit” and T.I.’s people say Ludacris took advantage of the fact he went first and that T.I. didn’t have a chance to respond. Either way the change never should have done ’cause it was funny as hell to hear two people trading barbs on someone else’s song. What’s funny is even though Luda says “your beef ain’t legit” in his response, the remove of T.I.’s verse whether Ludacris was actually responsible or not has MADE IT LEGIT. The title of his new release “Urban Legend” is therefore quite apt. Between his beef with Luda and the fact that the “Rubberband Man” recorded video footage to promote his album while IN PRISON on a probation violation (made even more infamous by the fact two inmates escaped from the same jail on the same night), T.I. has become quite the ghetto superstar. His buzz is now actually BETTER than Atlantic could buy, no matter how hard they tried.

With that kind of momentum, the only thing T.I. has to do with “Urban Legend” is release an album at least as good if not better than “Trap Muzik” and it’s sure to blow up. He certainly sounds fired up and ready on the DJ Toomp produced “Motivation,” taking shots that seem aimed at Ludacris even if he’s not directly mentioned by name:

“To be locked in a box niggaz happy to see
Put anybody on top, any rapper but T, I, P
But back to reality G
Whole D still carryin me, nigga I run this
So spread your rumours, kick all your lil’ dumb shit
Tell lies, laugh ’bout the time that I’m gon’ get
If it make you feel better, picture me over and done with
Punk bitch, come with all the gossip you can come with
Small thang to a giant, I can overcome this
Jail, I done done this, rap I’m just havin fun with”

You can hardly go wrong with having Swizz Beatz produce your first single, and “Bring Em Out” has been consistantly pushing up the charts even before this album’s release. Borrowing it’s hook from the acapella version of Jay-Z’s “What More Can I Say,” T.I. proves he does indeed have a lot more to say about his longevity in the rap game:

“T.I.P. comin live from the V.I.P.
Heard the night life lost life when I’d leave
Both the Feds and the State wanna seek my needs
The whole city got bizzerk how he got treated
That other nigga got a hit but shawty he not me
Who set the city on fire soon as he got freed
The king back now, hoes don’t even know how to act now
Hit the club stippers get naked ‘fore I sit down
Still ballin money stack taller than Shaq now
Still push a button to let the roof on the ‘Lac down”

I’d want to live it up too if I’d just gotten out of the pen. The topic matter and beats are pretty much what long-time fans of T.I. have come to expect, from Toomp’s pounding beat for T.I.’s warning cry “U Don’t Know Me” to looking for redemption on the smooth Sanchez Holmes laced “Prayin for Help.” What will be new to T.I. fans is the number of big name guests who joined the “Urban Legend” to get a little piece of his action. You’ll find Nelly on “Get Loose,” B.G. on “What They Do,” Mannie Fresh on “The Greatest,” Lil’ Kim on “Get Ya Shit Together” and Pharrell on “Freak Through” – and those are ALL back to back on tracks 7-11. That’s not even the end of it. The last three tracks of the album are just as big: “Chillin With My Bitch” featuring Jazze Pha, “Stand Up” featuring Trick Daddy, Lil Wayne and Lil Jon (OH-KAYYYY!), and “My Life” with Daz Dillinger. Does having so many guest starts water down T.I.’s 70+ minute album? The answer is a surprising no. T.I. still has nine tracks all to his lonesome, and still sounds like the star of the album on the other eight. The only thing the guests do in this case is solidify the point that T.I. has become OFFICIAL in the rap game. Luda now has some serious comp for who’s got Atlanta on lock, and it’s got to burn him just a LITTLE BIT that T.I. released “Urban Legend” one week ahead of his new album. If he wasn’t taking T.I. seriously before he should now, as should the rest of the hip-hop nation. If he can stay clean and out of prison (good for a buzz but bad for career longevity, knahmean) there seems to be no limit to how far he can go. Atlantic better make sure he has a merry Christmas, or he could spend a happy new year making MO’ MONEY somewhere else from a label willing to kick back all the money he’ll save them on promotion. T.I. is getting a lot of free publicity, and he definitely deserves it.