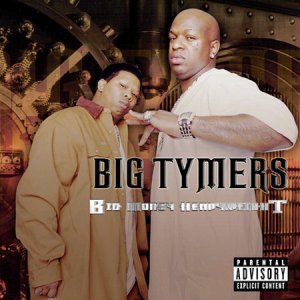 Historically speaking, being a star artist on your own record label has had mixed results. Sean ‘P. Diddy’ Combs is either tolerated or reviled based on one’s slant towards Bad Boy’s hip-pop. Master P is the most recognizable member of No Limit, but some would say that came at the expense of overshadowing talented rappers like Mystikal who left for greener pastures. And then there is Bryan ‘Baby’ Williams, co-CEO of Cash Money Records. By his own admission Baby is not the greatest MC, and reluctantly stepped into the spotlight as one half of the Big Tymers to bolster his fledgling label’s roster. The other half? Mannie Fresh, star producer of Cash Money’s many musical hits, including his and Baby’s own. As a group they have achieved success with albums like “Hood Rich” that are infectious and fun to listen regardless of their sometimes simplistic rhymes and delivery. Other albums like Baby’s solo release “Birdman” have achieved the opposite of dope due to a lack of stellar guest stars or tight Mannie Fresh beats.

Due to a large number of defections from Cash Money’s camp, the Big Tymers were for better or worse thrust into playing a larger role in supporting the label. As such they ascended like P. Diddy at Bad Boy and Master P at No Limit into being their label’s best known and most publically visible members. That’s not to say Bad Boy didn’t release albums by Black Rob and G. Dep or that P didn’t put the 504 Boyz and Lil’ Romeo into the spotlight, but their stars still seemed to shine brighter than that of their artists. In the world of sports entertainment, this would be akin to Vince McMahon getting more screen time and plot development for his “Mr. McMahon” character than the talented wrestlers like Booker T and Rob Van Dam who are supposed to be the stars. In fact, the irony is that the coincidence runs far deeper than that. Stephanie and Shane McMahon both have a higher profile than the grapplers they’ve been pitted against, not unlike Master P making his brothers C-Murder and Silkk the Shocker his label’s top draws other than himself, and even pushing his son Lil’ Romeo into the spotlight.

At this point, it’s pretty hard to reverse course in the direction of either camp. As Vinnie Mac and Birdman Baby rise higher, the public becomes more infatuated with their wealth and power, and less interested in the artists and entertainers who built up their empires to begin with. This isn’t always bad. If Mr. McMahon hadn’t risen to playing a starring role in his own TV programs, wrestling fans would have been denied his great feuds with Stone Cold Steve Austin. It’s likewise true that Master P songs like “Make Em Say Uhh” and Big Tymers hits like “Still Fly” wouldn’t have rocked cars and clubs coast to coast if these tycoons hadn’t made tunes. It’s not inherently evil for a CEO to be a star, but it IS hard for them to be objective about the quality of their own work. After all, when does a CEO have to say no to releasing his own albums or to making an appearance on his own TV show? They may not realize when they cross the line from being entertaining to being obnoxious, or when it becomes obvious to even casual observers that they’ve lost touch and are shamelessly promoting their own profile to the detriment of their company.

Thankfully, the Big Tymers haven’t reached that point yet. However reluctant they might have been to step into the limelight initially, they’ve performed the role with joie de vivre ever since. In fact their popularity can for better or worse be said to have pushed forward a lot of rap’s most expensive trends – from gold watches to platinum chains, from Rolex watches to iced out time pieces with 20 karats or more in diamonds. Living up to their own name, the Big Tymers have gone out of their way to be universally known as the most flashy and glossy rap stars going. This also benefits their material in a way they probably didn’t intend – by being so superficially obsessed with their wealth and the size of the rims on their cars, their raps maintain a light- hearted playfulness that’s easily accessible. The Big Tymers do on occasion address serious themes, but for the most part their songs are about a party lifestyle and a playboy image. Mannie is competent as a rapper, but it’s his suave and slick production that makes his songs so stellar. Baby is never disputed as a successful businessman among indie rap label owners, but it’s his bird calls and pimped out raps that garner his greatest acclaim.

“Big Money Heavyweight” continues those trends which made their last album so popular. On the lead single “Gangsta Girl” featuring R. Kelly, it’s clear their subject matter hasn’t changed a bit. Baby spits the lifestyle that other rappers talk about but only WISH they had:

“Mami is so gangsta cause she fuck with nuttin but gangsta
Type of nigga that’ll, stank a gangsta
Drink Hypnotiq and she, roll big body
And she, got a body that is, gangsta hottie
And she fuck with nuttin but gangstas that is old O.G.’s
24’s on that brand new jeep
At a, gangsta party she’ll be, drinkin Bacardi
And she, pops her body don’t you, hurt nobody
Got my, killers in here they’ll, squirt somebody
But that, Benz so fast it’ll, jerk your body
And we, smokin that Cali dro, totin that calico
Birdman and Kelly mami, let your body roll
No one will never know, what happen behind the do’
I like it fast or slow, a freaky bitch fo’ sho’
Street life is all I know, hustlin and stackin dough
I vow to keep it gangsta, until my casket closed”

Thanks to a simple and sultry beat with an influence of Eastern themes and wind instruments, combined with R. Kelly’s unabashed sexuality singing the hook, the song is a clear winner. Happily the Big Tymers are sharing the spotlight with other rappers as well. Ludacris (uncredited) and Jazze Pha flow on the smoothed out “Down South,” but it’s the return of Lil’ Wayne that steals the show:

“Weezy the God bow down give praises
I’m, easy involved with the drugs in my Matrix
Just, keepin it calm kickin dust from my laces
I’m, puckin a dre in the Escalade basic
Don’t you fuckin play cause I escapade faces
Buck fifty a gram quickly I’m real shifty
Come get me I’ll be waitin the steel with me
Show appreciation for those who still with me
Throw a heap of gravy at those who still envy
Cause Weezy F-baby all gravy gotta feel me
Ha ha! Feel me, Lil’ Weezy gat go blaakah
Feel heat, feel sleepy, here’s your mattress
Chill, I’m still street deep, I got access
Young’n play hard with no practice
Feelin me is like huggin a cactus
But if you know pain, you take it love it and patch it – Southside!”

In fact, a lot of the ex-Cash Money stars seem to be returning for this album. Over the pounding pulsating beat of “Back Up,” new recruit Gilly and old veteran Juvenile share the spotlight with Baby and Mannie Fresh. For Juveezy fans who go back to his “Ha!” days, it’s truly a blessing to hear him paired with Fresh again – it’s a natural and perfect combo:

“Look around there’s some niggaz not with me
Some of them dead, some of them doin bout 50
U.T.P. you better stand up it’s the general
Bringin back the era of the criminal
Look I got my own scene, got my own scheme
Got killers so basically I’m doin my own thing
I drive a seven-six-zero
Strapped up waitin at the light for the hero
It’s kinda hot outside, niggaz done shot Blue Eyes
That’s fucked up cause my connect dropped me 5
I’ma excersize my right to get this cheese
I don’t have to put in work nigga my bitch will squeeze
I ain’t positive – I’m a black man
But watch your mouth playa cause you can catch a back hand”

While the raps are functional throughout, it’s always the beats that make or break an album that chiefly features Baby and Mannie rapping. One can therefore take comfort in the infectious bounce of “Southern Boy” featuring Bun-B and Lil’ Wayne, the updated N.W.A. “I Ain’t the 1” redone into the humerous “To Be Played,” the surprisingly East coast sound of pianos and sped-up samples on “My Life” and the light breezy intoxication of “We Can Smoke” featuring TQ on the hook. Mannie steps up on the raps here nicely:

“Shazzam, damn, a bag of weed!
A cup of Cognac and a couple of seeds
Two hot strippers coming out they zippers
We some pimps dude – we don’t tip them, they tip us!
Got my smokin jacket on, 10 feet long
Inhale, exhale – that shit gone!
If you ain’t got what I’m drankin then I’m drankin what’cha got
Hey, keep them bitches comin cause I drink a lot
I’m a gulp like a fish – you want some of this?
We can have sex, but you can’t have a kiss
She said what’s next – you ever did X?
Ex-girlfriend, now I’m cashin yo’ checks!”

If you had to listen to an album where the stars are the label’s co-owner and chief producer, you could certainly do worse than the Big Tymers, but it’s unlikely you’d do much better. While you can’t necessarily condone the fact they promote the kind of glamerous life many people wheel, steel and deal to get the money for, you also can’t fault them for enjoying what they got while they’re still on top. Justin Timberlake and Michael Jackson might have their kind of money, but it’s hard to imagine they have as much fun with it as Baby and Mannie Fresh do. Ultimately, that’s why they deserve to be the stars of their label – they’re not going to win awards for the greatest lyrics ever, but like a classic Fresh Prince album it’s got good beats and it’s just plain fun to listen to or groove to. If you want a stocking stuffer that’s not a shocking suffer, put “Big Money Heavyweight” on your Christmas gift list.