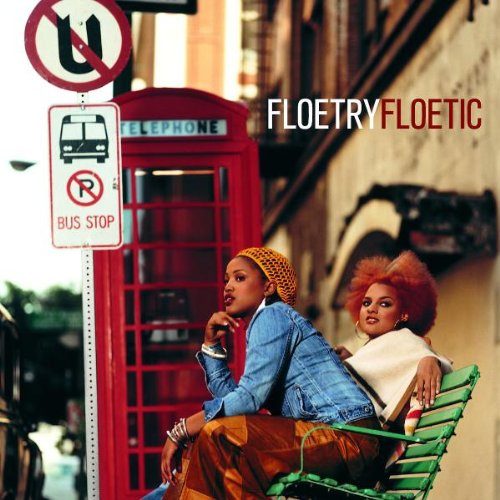 That’s right. Floetry, a new female duo in hip-hop that’s here to set it for DreamWorks Records, probably best known to most heads for re-issuing Kool Keith’s “Dr. Octagon” CD with a slightly different set of tracks. They sure did figure out how to catch a true rap fan’s ear though, because by using an interpolation of the jazz classic “Born to be Blue” a lot of fools like me turned their heads and went “Huh? What?” the first time we heard their single “Floetic,” which also happens to be the title of their debut. Conceptually I’m already digging them for the name alone. We need more hip-hop artists who take their raps seriously. If you can flow, and you can write poetry, well guess what? You got Floetry.

Fortunately the group didn’t let up on the buzz that their first single generated. These two sisters work together to cover a broad range of sound, where the musical production carries them from slow urban contemporary to up-tempo hip-hop style without ever sounding mismatched. The result is that the moods match well with the subject matter at hand; and even when the song has the blues the spirit will uplift you, such as on “Ms. Stress.” Just peep the words of the rapper who aptly calls herself a Floacist:

“I tried to be, all he had ever talked of the
interchangable faiths and, physicality and, mentality of, she
As, close drew near, he summoned all my tears and
abandoned we, I lived alone for years
No longer knowing, who exactly is, me
As, I began thee, punishment for, his perfection
My vision, there they lost their direction
My return to innocence was lost […]
.. now angels and devils look alike to me”

I don’t know much about the Floacist, but she has a very pleasant accent that sounds like it might even be Brixton, or somewhere in the U.K. As for her partner the Songstress, the girl has some SERIOUS PIPES. Just listen to the way she wails on “Sunshine”:

“I used to depend, on your eyes
to show me the way that I should go
My reality is blurry;
I’m afraid of being all alone!
Your light has been my guide
throughout the good and bad
I wish that I had
spent a little more, attention
to, my one and only SUNSHINE!! YEAHHH..”

For the ladies of Floetry, it’s all about the vibe. A vibe they strive very hard to keep consistant throughout this strong debut. You can find it on catchy finger-snapping bouncing grooves like “Fun,” somber reminders to not miss opportunities for love like “Say Yes,” or frank complaints about mis-communication between relations on “Headache.” To some degree the poetics offered on this album stay centered on the inter-twixt’d complexities of man and woman working with each other; and with a generally jazzy sound (ironically the songs were recorded at “A Touch of Jazz” in Philadephia, the studios of DJ Jazzy Jeff) some naysayers might confine this album to the “coffeeshop chicks and white dudes” Common once disdained in his raps. For those who like well thought out songs, a good union between singing and spitting, and a female MC who doesn’t sound like a Brooklyn b-girl or a Florida flosser, “Floetic” by Floetry is definitely a taste of something different. It’s good enough that you wouldn’t mind seconds or thirds.