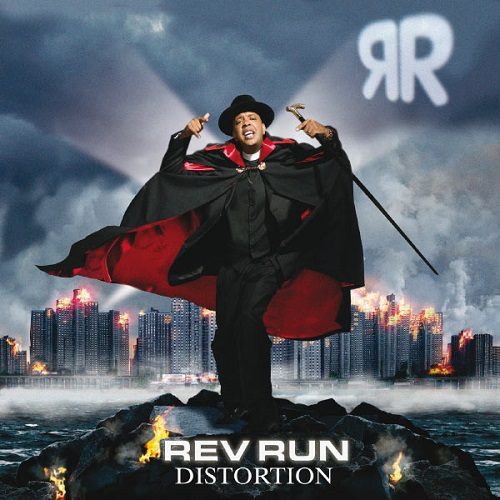 Two weeks ago I didn’t even know the Reverend Run, formerly of the legendary rap group Run-D.M.C., was coming out with a new album. Two days ago I didn’t even know Run had his own reality TV show hosted by MTV, appropriately titled “Run’s House.” Having thus been brought up to speed on what Run’s been doing since the untimely and tragic demise of his former DJ Jam Master Jay, I was ready to check out “Distortion” and see what he’s up to today.

On the cover of the album Rev Run looks a little more like the Count of Queens or the High Archduke of Hollis than a preacher, although the fact he’s standing on a hill overlooking a city burning and in ruins is definitely a biblical allusion to the end of days. The picture of ruination is far too widespread and devestating to be another 9/11. On “Don’t Stop Y’all” he actually does a fairly good job of explaining this new look and how it fits into his rap:

“Now once again my friend, it’s the Reverend
The first platinum status rap president
And from the coast of California to the shores of Maine
Got a East coast sound and my beats go bang
My old black crown and my sneakers own name
And I’m back y’all – with a collar and a cape
Like a superhero armed with an old school tape
And to the beat y’all, it’s a banger for the clubs
You ain’t never seen a Reverend that’s sittin on dubs”

I’m sure Run doesn’t mean to imply he’s the stereotype of a preacher who lives well while his neighborhood is impoverished. After all Run was probably wealthy a hundred times over from a long and successful career of recording and touring with partners D.M.C. and JMJ. Still I can’t help but hear the words of Grand Puba Maxwell echoing in my head: “Preacher got my Old Earth puttin money in the pan/For the rest of the week now I’m eatin out a soup can/ He has a home, drives his Caddy through town.” Regardless Rev Run seems to believe he’s here to save us all like he’s Chino XL, minus the profanity and hilarious punchlines.

Rev Run’s not just armed with an old school tape though, he’s bringing old school right into the modern day. Somebody clearly told Run “if it ain’t broke don’t fix it” because he’s done very little to change his flow in the last 20 years. In fact on the opening song “I Used to Think I was Run” you’d swear the song was straight from 1988, from the Whiteboyz Noize recreation of the sound to Rev Run’s recreation of the “Tougher Than Leather” lyrics and flow:

“Now I was sittin up in Cali from the alley in Queens
Breakin records never know exactly just what it means
Sellin records makin money just to throw in the air
Rockin sneakers, bustin speakers, every day a new pair
Nothin borin, steady tourin, livin life without care
And if I wasn’t on the cover of your paper was rare
Even mami would remind me and rewind me the truth
Sucker fellas out there jealous, I was rough in my youth”

As you might have guessed there’s a downside to this old school nostalgia. If we want to relive the days of old, it doesn’t work when the only one rapping is Rev Run. To be fair even without JMJ’s passing Run-D.M.C. would have and probably should have disbanded anyway, due to D.M.C.’s change in vocal tone and lack of enthusiasm for recording more Run-D.M.C. style records regardless of the change. Darryl seems to be content with his legacy as a hip-hop pioneer and legend, but something’s still driving Joseph to keep on running (no pun intended). The lyric above holds the answer: “nothin borin, steady tourin.” As much as Run loves the gospel and loves his family, he misses the spotlight. That explains both the reality TV show and the new album.

In his own way Rev Run is a little bit like Hulk Hogan. He may be a bit too old to be out there doing it any more, but he’s such a legend that nobody is going to tell him not to do it – in fact far from it. People encourage past their prime performers to keep going out there and doing it, squeezing every last nickel they can out of entertainers until there’s no money left to grab. It should come as little surprise then that Run’s own brother Russell Simmons has signed him to the Russell Simmons Music Group (RSMG). It seems that the conceit of stardom is hard for either of them to give up, as Russell undoubtedly misses the prestige and acclaim of being a founding pioneer behind Def Jam. I doubt his new label will reach the lofty heights of the old one though, and Rev Run should prepare for the shocking truth that if you go for nostalgia the audience will be as old as you are.

That’s not necessarily all bad. It’s not bad to be old enough to remember when “Rock Box” was new, but it’s sad but true to say not everybody who rocked back then is still down with hip-hop today. The new generation likes Cassidy and Young Jeezy more than Public Enemy and Rev Run. This doesn’t mean the latter are making irrelevant music at all, it just means that they aren’t going to capture the “hip” part of the audience that’s larger and spends more money on music. My fedora hat’s off to Run for doing it his way and to the Whiteboyz for giving him a sound that fits the old school style of his lyrics and delivery. The best part is that Run’s doing more rapping than preaching; so even if it’s a little tiresome to hear only him on the mic from time at least it’s not stale and didactic. I cautiously recommend “Distortion” to Run-D.M.C. fans as being a lot better than their unceremonious disaster of a final album “Crown Royal” while openly admitting anybody younger than 18 may not relate to it and pass right on by to something else.