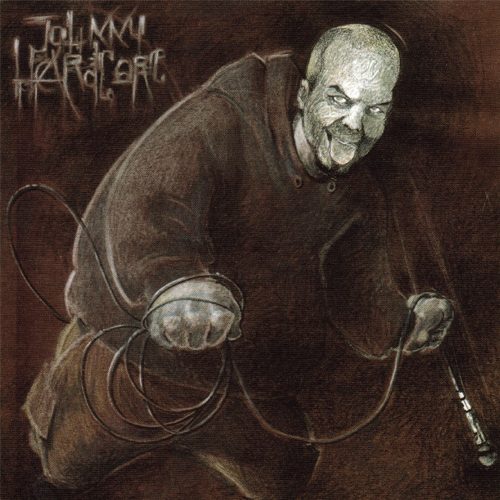 Johnny Handsome he is not, at least not in the artist’s rendition gracing the cover that depicts him as the Hunchback of Notre Dame. But John Young tackles the mic with a special kind of fervor, adding credibility to his somewhat unfortunate name. Johnny Hardcore it is, then. The member of The Verbals, a crew originally hailing from St. John’s but presently scattered all over Newfoundland and Nova Scotia, drops his self-titled debut, which the MC is confident enough to start off with nothing less than “The Hip-Hop Ten Commandments”. Thankfully, after mentioning basic principles such as originality and respect, he leaves it at that, not joining the zealots who try to shove their definition of hip-hop down everyone’s throat. With good reason, Johnny Hardcore is more concerned with his own status: “If you’re lookin’ for a savior / then bite what I write cause my shit be major.” Evidently, he means major as in great in scope, size, and effect, not as in major label.

While Johnny Hardcore hasn’t been offered a million dollar deal just yet, his achievements aren’t as insignificant as they may seem either. Sure, if it hadn’t been him, another local hero would have probably won the MC battle at the Canadian DJ Olympics 2002 in Halifax. But the mere fact that a rapper partakes in such an event and is able to win it says a lot about his dedication to the artform. As they say, competition brings out the best:

“Go get your egos, Eckos, and Timbos
and 10 girls who don’t condemn being called hoes
Regurgitatin’ flows, hatin’ on those that’s in the know
The generic all lack spirit, when I went back to hear
not one lyric packed any mere merit”

What no lyric quote will ever be able to communicate is what an MC sounds like, and often what he sounds like is what truly defines him. A decade ago, Johnny Hardcore would have probably been the typical rhyme shouter following in Everlast’s footsteps. As a contemporary MC, he is able to differentiate his gruff, menacing voice into a detailed flow. But what makes him stand head and shoulders above most rappers out there today is his agility. Although he seems to flow under the influence of a centrifugal force urging him to test the speed limit, he is always on point, guided by eventful tracks that give an MC something to work with. Whether it’s the straightforward boom of “The Hardcore March” or the vintage hip-hop sway of “Some Knew”, Johnny Hardcore unleashes his densely packed delivery with true devotion, raising a wall of words that’s seemingly hard to penetrate.

So what is he saying? If you’re looking for a rapper sweet-talkin’ you, then Johnny Hardcore ain’t the one. But rather than scaring everyone away with an overly aggressive demeanor, he (at least partially) follows his “inclination to gauge mature conversation,” knowing that “most testosterone decisions lack the courage or the convictions,” as he reveals on the meditative “Integrity”. But with the competitive spirit still soaring high in hip-hop, sometimes you just have to act on impulse:

“My heart’s racin’, all the adrenaline…
Smart men wait for emotions to settle in
but once I get cooked, heated, stirred and simmered
you get took, beaten and served when I’m all up in it
I never meant to, but the placenta of my temper is deep within
my every hip-hop decision”

Johnny reveals this in “My Love Song”, an attempt to express his love for hip-hop in battle rhymes. On “Don’t Flatter Yourself”, Johnny seems to want to excuse himself for the ongoing battling on his part by arguing that “rappers talk shit / you have to, in this MC moshpit.” While his battling antics aren’t particularly traditional, it’s good to see him try out other song formats as well. “Sleep Deprivation” finds him coming to grips with insomnia with detailed imagery, while he juggles hip-hop stereotypes on “Sarcasm”:

“Go rock ‘n roll? I can barely rap
can you hear this crap?
We all know I’m pretendin’ I’m black
I got my pellet gun modified to look like a strap or a gat
I know you like the sound of that
A rattattat, a Raiders hat
and a White Sox baseball bat
Wanna remix disco and do shit with Sisqo
Fill up the tub and slit my wrist slow
Call every woman a hoe
and every guy I know bro
Bet you see me on BET
spittin’ a written freestyle flow
Wanna be sponsored by Tampax
screwfaced to the max
rappin’ about dirt naps in your wet nap
cause I drool like a baby
and fuck like a lady
and pretend everyone else is crazy”

Sarcastic or not, Johnny Hardcore seems to have his very own take on what’s crazy and what’s not. He will get crazy with guests The Butler, Matt Labatt, MC Frank Deluxe and Thesis Sahib as the “Newfinloons”, only to silently mock his peers at the Memorial University of Newfoundland by proposing a hip-hop university on “M.U.N (Man U Nuts)”:

“I want everyone in the universe to be
in contact with my university
[…]
There’s no scholarships, bring skills and wills
We won’t separate economically, each term’s two bills
You just send proof and reasons why
you wanna attend, flow freely
for degrees in b-boyism, smoke mad ism
[…]
Master the art of graffiti
turntablism, b-boyism, the title MC
We have anthropology, biology
economics, computer science and history
Of course we carry music and drama
linguistics and law with a karma
There’s humanities, philosophies
women studies and technology degrees
Class breaks at 4:20
There’s freestyles in lunch room between 1 and 3
December 2nd is the MC cook-out
when graduates come back and new admissions get took out”

Proving that rarely a thing in hip-hop is self-taught, Johnny Hardcore teams up with new Verbals member Jay Bizzy to pay homage to yesterday’s greats with “Rhymin’ w/ the Biz”, their very own version of the Big Daddy Kane/Biz Markie classic. It’s a tribute rather than a remake, and as such it rocks just the way it should rock, the two MC’s piloting a fast-paced but soulful track, making the song one of the most enjoyable on the album. Matter of fact, if you listen closely enough, this album is built on timeless hip-hop vibes, from the murky acoustic bass of “The Hip-Hop Ten Commandments” to the percussive pace of “Contemporary Stimulation”. Most importantly, the backbone of any hip-hop track, the beats, have been carefully attended to, without falling back on overused breakbeats. Breakbeats they are, but quite a lot of them fit so well you’d think a live drummer was involved in the recording. Unlike most of today’s drum sounds, these beats boom and pound like in the days of old.

Another exceptional feature of this album is the amount of scratching. DJ’s Jabba The Cutt, Skratch Bastid and Uncle Fester let loose on almost every cut, often to great effect, making you wonder why we don’t hear more scratching on today’s rap records. Check for Skratch Bastid doing his thing on “Rock ‘n Roll Sucks”, cutting up what sounds like the humming of a vacuum cleaner. Being that this album is such an intense experience on the audio level, listening to what Johnny Hardcore is actually saying might not be everyone’s priority. Coincidence or not, the lyrics quoted in this review don’t truly reflect Johnny’s verbiage. But whatever he’s saying, he sure knows how to work it into an impressive wall of sound.