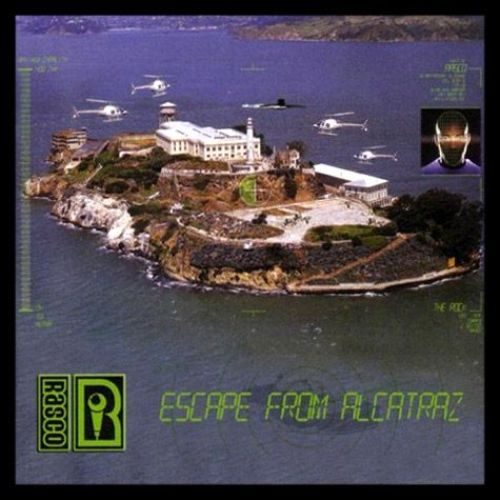 Since its discontinuation as a Federal Prison in 1963, Alcatraz Island has steadily gained a legacy that it was the toughest prison for the tougest prisoners. Being an island in the San Francisco Bay, Alcatraz was obviously one of the most difficult prisons to escape from in history. A Cali-based rapper named Rasco has now come along, and with help from his new label, Coup D’Etat (the home of underground favorite J-Live), feels like he has escaped from the always-limiting metaphor of career confinement in Alcatraz. On Coup D’Etat, Ras’ is anxious to show the world what he’s about. “Escape From Alcatraz” is the album that finally shows people who I really am,” says Rasco.

Escape From Alcatraz covers many topics, and although it’s not always a perfect result, the different sounds helps keep the album fresh. The superb, socially concious track “U Got The Time” may contrast rather starkly to the dance song “Making U Move,” but Rasco sounds natural on both tracks. The former track, “U Got The Time,” is a smooth funk track featuring the common, sped-up, vocal sample on the hook. Ras’ brings it nice on the mic:

“It’s like, it’s offical
My trademark sparked the market
The marksmen focused on one target (Ha!)
Uplift all of my folks, sometimes clouded the smoke
On street corners just crackin’ the jokes
Young blacks, serious kids
Sometimes doing serious bids
We in the streets doin’ our biz’
Whatever it is, across the land extend hands
To eachother, I’m only tryin’ to heal young brothers”

The next track, “The Sweet Science,” features Chali2na of Jurassic 5, and the two mesh very nicely over another smooth funk beat. ‘2na further cements his position as one of the better MCs in the rap game–not just a deep-voiced, gimmick rapper. The beat sounds very much like one you might hear on a J5 cd, and Rasco sounds as if he could be the adopted, 5th MC of the group on this one.

Two tracks, “Making U Move” and “Put Your Hands Up,” are the two obvious attempts at targeting the club audience. Neither track is a club classic, though both are above average, especially “Making U Move,” which features a beat influenced by the Middle-East–similar to Erick Sermon’s “React” or Truth Hurt’s “Addictive.” Both of these tracks are worth listening to, though I believe Ras’ sounds more comfortable and natural over the more laid-back underground beats like the stellar “We Get Live.” The funky bassline is real catchy and the guitar plucking is another nice touch. “Let’s Get Down Tonight” follows a similar production pattern, and Rasco’s effortless flow comes off nice:

“Nothin to it but just the get down to it
We get towns to bring the shit down
What now? You niggas that chit-chat
Be hearin the click-clack, we bringin’ the shit back
So how it feel? We rock the most steel
It’s still the most real, we lookin’ to cut deals”

“Endless,” featuring Planet Asia, has a catchy, pounding, string loop with scratched vocals on the hook. The small intricacies of the production are worth the listen alone, but the guest vocals by Planet Asia along with Rasco’s solid verses make this song solid all-around. The production on “Real Hot,” yet another funk-influenced beat, is exactly as the title indicates: Hot. The final track of Escape from Alcatraz, “All I Wanna Be,” is an emotional one as Rasco reflects on the burdens of adult-life, and more specifically, the responsibilities he faces as a father. The intense string loop is definitely fitting for the tone of this song, as is the vocals of Kisha Griffin. The track is generally pretty good, but it seems a bit out of place on this album.

Ultimately, this album is a success because the best songs are very good, and the forgettable ones aren’t too bad. Only a couple of songs, namely “Put Your Hands Up” and “Snakes In The Grass,” are pretty bland and don’t offer too much. It’s not uncommon in today’s music industry to see artists trying to appease fans from different genres, and Rasco is no different. The irony of that reality is that Rasco probably has the potential to make a stellar album if he could channel his energy into a more cohesive collection of tracks. The best tracks from this album, “U Got The Time,” “The Sweet Science,” “We Get Live,” “Let’s Get Down Tonight,” and “Real Hot,” are laid-back, funk driven beats which allow Rasco to flow nicely over them. Perhaps it’s Chali2na’s appearance on “The Sweet Science” that brought this to mind, but I think Rasco would sound great with beats supplied by guys like Cut Chemist and DJ Nu-Mark.

You’d think a convict would run buck-wild while enjoying his or her newfound freedom after escaping from a place like Alcatraz, and Rasco definitely covered many of the bases on this one. If this album is a product of Rasco’s anxiousness to fully express himself, then let him forever be anxious.