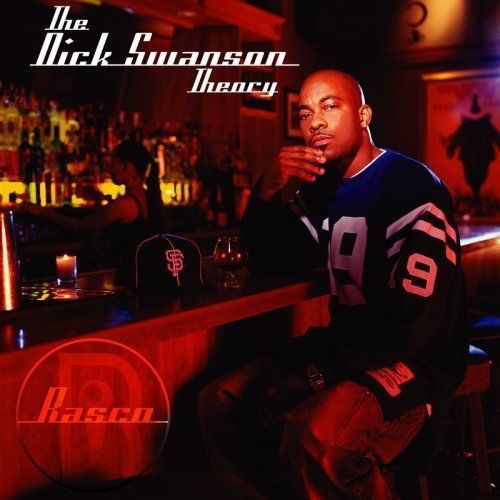 It’s altogether appropriate that when you visit the Pockets Linted website to see what information they have on Rasco you’re confronted with the words Planet Asia, who besides sharing his penchant for non-hyphy rhymes also collaborates with him in the form of a group called Cali Agents. Above all else the one thing you can say for sure about Rasco is he has a history of challenging other rappers to exceed the norm and “The Dick Swanson Theory” is no exception. Peep “Lightin it Up” for example:

“Look, I expose your clique
Man you cats ain’t as cold as this
Just as good as it’s supposed to get
Hone your skills, you lookin for the wrong appeal
Check the file, respect the style
Let the bloodhounds loose, make ’em run for miles
{*barking*} Get your sound right, that don’t even sound tight
Spittin the shit that only get your town hype
We do it worldwide, you should let your girl ride
Roll with us, too cold to bust”

Despite his unconventional approach to riding for the West coast, Rasco is a fixture of the underground scene in Cali, having hit the top of the Bay Area Hip-Hop Coalition charts and maintained a cult following despite bouncing from Stones Throw to Copasetik Recordings to his current home; further inspection reveals this is in fact Rasco’s own imprint. Now how ruggedly independent do you have to be to not be happy at Stones Throw, one of the Ã¼ber labels of underground rap? Well take it from Rasco, unless you’re doing it for delf you’re getting “No Love”:

“I give ’em nothin they can cling to
Like fastballs on the swing-through; aiyyo I didn’t really mean to
Most have known I’m postin strong
‘Til cats had to ask what the fuck is wrong
Fuck your song (damn!) Man your bars is weak
I’ll be out givin scars to cheeks, hard to speak
Bring me the hardest beats, start settlin in
Watch Ras start wearin ’em thin”

Rasco is unapologetically self-confident, and carries that boldness into battle like a sturdy shield which protects him from the ills of Industry Rule #4,080. He has that in common with another rapper named Ras, and if you were thinking of him when you read the above verse perhaps you won’t be surprised to hear that Rasco and Ras Kass collide and collabo’ together on a track entitled “Making the Rounds”:

Rasco: “We came to set niggaz up, you cats ain’t really tough
Still spittin rhymes that just ain’t real enough
Cups fillin up, late night at the spot
Around clock, still chasin the knot
This is, artillery just for arch enemies
Niggaz took shots and tried to get rid of me
Won’t go willingly, dude you’re not feelin me
We yank plugs to stop your auxillary”

Ras Kass: “We, G-O-A-D like 2-P-A-C’s
School niggaz like PPA’s, vis-a-vis
Either see me paid or see them strays
See DA’s hatin niggaz like the CMA’s
Where all day got niggaz kissin barrels like, PDA’s
Pop open your chest like CD trays (blow!)
I’m hard on a hoe, need a ride or die bitch
Cause a thorn in the saddle ain’t nuttin to ride with”

Now if you think you’re seeing a pattern here it’s not a coincidence – Rasco tends to spit half or more of the time criticizing other rappers, which could tend to become a underground rap cliche were it not for his infectious rich vocal tones and clever verbal interplay. Rasco also breaks out of the expectations he’d only roll with California’s underground scene by bringing in New York’s indie icon Aesop Rock to bless the haunted piano keys of “World’s Collide.” The two compliment each other remarkably well and one would hope after listening to it they do a full-length Cali Agents style album together. Other standout tracks on the album include the upbeat energetic “Pressures of Life,” the Agents reunion track “Backdown,” the chopped up soul of his quest for love on “Chances” and the question rap fans have been asking for years now – “Whatever Happened to the Game?”

What happened is artists like Rasco got relegated to the sidelines, languishing in obscurity while less talented MC’s took the spotlight and the shine, constantly botching plays and costing their comrades future victories. With production by Marco Polo, Jake One and Oh No among others though, Rasco gets that classic sound that pounds your ears and takes this album from another tired complaint about ballers’ flossing to a statement that’s BALLIN’ like Jim Jones in its own right, minus his level of hype. If you played this album for an unsuspecting head who didn’t know Rasco, they’d probably be converted to a fan in a snap. The problem is, who out there is bumping Rasco? Buy this and burn a copy for your friends. No RapReviews.com is not advocating piracy, but once they understand the formula behind “The Dick Swanson Theory” they can do the math too and cop his next release. Hip-Hop has to build from the grassroots up and if you want the game to change, get off the sidelines and play your part.