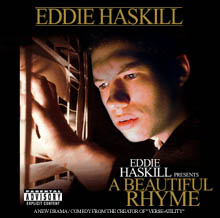 In “A Beautiful Mind”, Ron Howard’s biopic of Nobel Prize winner John Nash, Russell Crowe plays a brilliant mathematician who fights a lifelong struggle with schizophrenia. Fictionalized and dramatized, the film introduces the viewer to the dreaded illness, and in the process challenges our own notions of perception and reality. A self-admitted movie buff, rapper Eddie Haskill not only recreates the “Beautiful Mind” poster for his album cover, he also takes a somewhat related approach to his own writing. In a cleverly used intro, Haskill reveals that his album is “similar to A Beautiful Mind in the sense that I’m a schizophrenic with rhymes, so sometimes I’ll tell the truth and sometimes I’ll lie.”

Unlike filmmakers and actors, rappers often have to deal with the question if what they depict is ‘true’ and who they portray is ‘real’. Even though some are quick to call themselves nothing more than entertainers while others are eager to prove that they indeed walk the walk, most rappers would agree that their songs have both the makings of a documentary and a drama. Face it, that’s how most narratives work, from plays to novels to scripts, despite disclaimers like ‘Any similarity to persons living or dead is purely coincidental.’ Rap music works the same way. Sometimes you get a potent distillate of actual events, other times the facts are diluted in a sea of fiction. And most of the time you get something in between. Add to that a thrill-seeking audience and performers torn between playing supervillain and coming to grips with their biography, and you can see why rap music’s relationship with ‘reality’ is indeed a complex one and often borders on schizophrenia (to use the term loosely).

But deal with it for a long enough time, and you’ll realize just how much truth lies in a statement like LL Cool J’s “Even when I’m bragging I’m being sincere,” or even Tony ‘Scarface’ Montana’s “I always tell the truth. Even when I lie.” It’s a paradox that hip-hop will help you understand. Art may have been the farthest thing on his mind, but the cocksure Scarface mindstate has been a characteristic of rap music for years. And if you’re wondering how in the hell did a fictional drug lord become a hip-hop spokesman, you’ve missed out on a whole lot of good music. Interestingly enough, Pablo Picasso, arguably the most important painter of the 20th century, came to a very similar conclusion when he reflected on art: “We all know that art is not truth. Art is a lie that makes us realize truth, at least the truth that is given us to understand. The artist must know the manner whereby to convince others of the truthfulness of his lies.”

Eddie Haskill the rapper is still on his way to master this particular art of convincing others of the truthfulness of his lies. Check his first demo release from 2001, “If I Only Had Production”, compare it to his current album, and you’ll see that Haskill has gone from a kid trying too hard to be heard to an advanced writer. Conscious about how he comes across, Haskill repeatedly references his earlier works. In “There Goes the Neighborhood” he laments, “I wish that I knew what I know now… when I was younger,” looking back at a time when he was “settling for gaudiness, I admit to coming with corniness / but it took me till 22 to realize how to story this.” Elsewhere, he recounts: “I remember back when Eddie didn’t have skill / talked about gats but Eddie didn’t pack steel / learned from the mistakes until Eddie Had Skill.”

For instance: “Where I’m Really From” is an update on last year’s Jay-Z-inspired “Where I’m From”. He’s still from Buffalo, NY, but has a few things to add, because “when I made that song I was keeping it all pretty / but there’s a lot more to life growing up in my city.” But what he really did was leave the wanna-be tough turf tale behind him to take a closer look at his hometown. Being a rapper, he thinks we’re interested in hearing about his hassles with the local rap scene (including groupies), when the real gem is the last verse:

“Things done changed since I wrote the last edition
We birthed Rick James, last time his ass was missing
We got Drew Bledsoe to raise our pass position
And fuck Peerless Price, I knew he’d never last with bitching
I wish I would’ve known that Lackawanna housed six terrorists
cause they could’ve called upon my crew to take care of this
But it’s over and done, I’m flowing for fun
I never made a dollar without in exchange owing one still
I’m the original deal but a bit enhanced
Never bankrupt like Adelphia, now our hockey team is switching hands
From one billionaire to another
It’s Uncle Eddie Haskill now thanks to both of my brothers
And there’s no reason to risk search and seizure crossing the border
we got our own casino now that’s up north close to the water
It’s Babysteps for hip-hop, The Cut for a taper
Downtown to get rocked and Blue Cross for my paper”

His ambitions as a writer don’t stop there. “Paradise” slips from a good life theme into post-9/11 observations. “Radio Flyer” is a nasty parody of the stereotypical “white trash prick who likes to get his ass licked” (“You don’t like me? Stick to Brad Pitt and Ben Affleck!”), has a low-paying job and abuses his family. Despite occasionally being over-the-top in his depiction, Eddie Haskill still manages to shape the song into a serious statement about a messed up life. In “Statutory’s Half the Story” we meet a young man accused of statutory rape telling his side of the story. Whether you can identify with the character or not, from an artistic point of view you’ll have to agree that Eddie Haskill displays some fine penmanship.

The centerpiece of the rapper’s maturation process however is the appropriately titled “Higher Learning”. Ultimately an attempt to better race relations (“the 14th amendment doesn’t help to encourage friendship […] it’s obviously up to us”), “Higher Learning” is an unflinching account of two incidents (one experienced by himself, the other by his father) that made young Eddie think about his outsider status in rap. First, the white teen gets in trouble for wearing a Malcolm X hat:

Then the song switches to present time, with Haskill addressing his Nas diss (see our “Verse-Atility” review). In a somewhat problematic move, he then recounts an incident that by his own admission happened to his father, not to himself:

“Four blacks pushed me back to the ground
With fists and kicks, yo, they beat my ass down
[…]
And I wish I could say it wasn’t cause of my race
but it was obvious they did it cause of the color of my face
They said, ‘Fuck you cracker! Fuck you cracker!’
I’m thinkin’, what the fuck, yo, don’t you know I’m a rapper?”

While it’s debatable if a rapper should be allowed to stretch the truth in a sensitive case like this, it’s good to see Eddie Haskill turning “Higher Learning” into a lesson EVERYBODY can learn from: “I’d never been a racist but now I’m the victim of a hate crime / you’d be surprised how it fucks up the state of your mind.” Not to get it confused though, at heart Eddie Haskill is still a shit-talking battle rapper. Like Eminem on “The Marshall Mathers LP”, he likes to revisit his former self. “And you probably thought I’d leave off the old style,” he quips on the nasty “Quick to Bust”. Rappers as diverse as Big L and Copywrite come to mind when listening to Eddie Haskill’s lyrics. When additonally listening to his flow, diction, and voice, it’s evident that this rapper is not yet up there with the pros.

Instead of pursuing overly ambitious concepts on the lyrical side (like adapting “Memento” for a rap song), he’d be well advised to improve his (solid, but far from stellar) delivery, because that’s the next level Eddie Haskill will have to conquer. The same goes for the beats by his various MP3.com collaborators (of which Kid Kutz, Rockwell Entertainment, Unstoppable Entertainment and Soleternity definitely deserve a nod), which so far rarely truly fit the song format. Still, Eddie Haskill is taking shape more clearly with every release. Now it’s time for refinement. Something that shouldn’t be too hard to achieve, given his motto: “See, happiness is key, so until that be me / I’ma plug the mic into my lungs and use rap to breathe.”